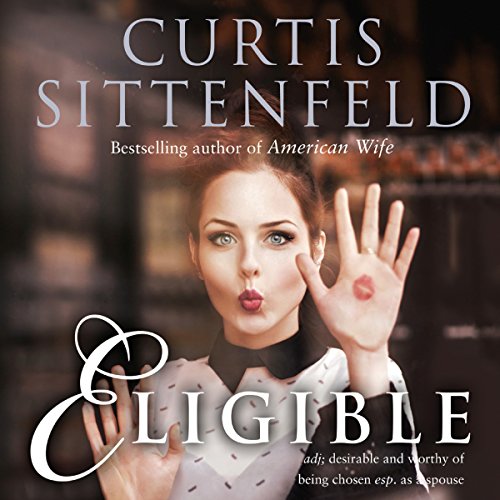 From the best-selling author of Prep, American Wife and Sisterland comes this brilliant retelling of Pride & Prejudice, set in modern-day Cincinnati.

The Bennet sisters have been summoned from New York City. Liz and Jane are good daughters. They've come home to suburban Cincinnati to get their mother to stop feeding their father steak as he recovers from heart surgery, to tidy up the crumbling Tudor-style family home and to wrench their three sisters from their various states of arrested development.

Once they are under the same roof, old patterns return fast. Soon enough they are being berated for their single status, their only respite the early morning runs they escape on together. For two successful women in their late 30s, it really is too much to bear. That is, until the Lucas family's BBQ throws them in the way of some eligible single men....

Chip Bingley is not only a charming doctor, he's a reality TV star, too. But Chip's friend, haughty neurosurgeon Fitzwilliam Darcy, can barely stomach Cincinnati or its inhabitants. Jane is entranced by Chip; Liz, sceptical of Darcy. As Liz is consumed by her father's mounting medical bills, her wayward sisters, and Cousin Willie trying to stick his tongue down her throat, it isn't only the local chili that will leave a bad aftertaste.

But where there are hearts that beat and mothers who push, the mysterious course of love will resolve itself in the most entertaining and unlikely of ways. And from the hand of Curtis Sittenfeld, Pride & Prejudice is catapulted into our modern world singing out with hilarity and truth.

Praise for Curtis Sittenfeld: "Novelists get called master storytellers all the time, but Sittenfeld really is one." (Maggie Shipstead)
"Sittenfeld has an astonishing gift for creating characters that take up in residence in readers' heads." ( Washington Post)
"When it comes to tearing apart contemporary American family life, Sittenfeld is up there in a class of her own." ( Guardian)
"Curtis Sittenfeld has a knack for capturing characters so vividly it's uncanny." ( Daily Mail)
"Like Kate Akinson with Life After Life, Sittenfeld is a reliably realistic (if slightly dreamy) novelist who has here tackled a somewhat far-fetched concept outside her normal range and displayed impressive comfort in doing so." ( Sunday Times)
"Curtis Sittenfeld shares with Salinger a knack of capturing, in effortless prose, a teenager mindset.... It feels important.... Most vitally of all, it feels like adolescence." ( The Times)
"Sittenfeld is a pin-sharp observer." ( Independent on Sunday)
"The summer's most delicious read." ( Entertainment Weekly)
"Casts an unshakable spell and has plenty to say about class, sex and character.... One of the 10 best books of 2005." ( The New York Times)