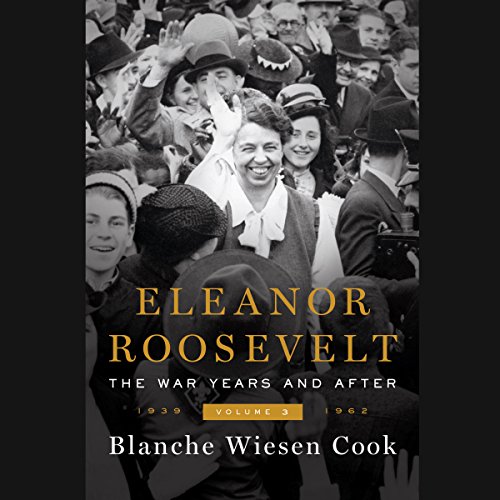 The final volume in the definitive biography of America's greatest first lady.

Historians, politicians, critics, and listeners everywhere have praised Blanche Wiesen Cook's biography of Eleanor Roosevelt as the essential portrait of a woman who towers over the 20th century. The third and final volume takes us through World War II, FDR's death, the founding of the UN, and Eleanor Roosevelt's death in 1962. It follows the arc of war and the evolution of a marriage as the first lady realized the cost of maintaining her principles even as the country and her husband were not prepared to adopt them. Eleanor Roosevelt continued to struggle for her core issues - economic security, New Deal reforms, racial equality, and rescue - when they were sidelined by FDR while he marshaled the country through war. The chasm between Eleanor and Franklin grew, and the strains on their relationship were as political as they were personal. She also had to negotiate the fractures in the close circle of influential women around her at Val-Kill, but through it she gained confidence in her own vision, even when forced to amend her agenda when her beliefs clashed with government policies on such issues as neutrality, refugees, and eventually the threat of communism. These years - the war years - made Eleanor Roosevelt the woman she became: leader, visionary, guiding light. FDR's death in 1945 changed her world, but she was far from finished, returning to the spotlight as a crucial player in the founding of the United Nations.

This is a sympathetic but unblinking portrait of a marriage and of a woman whose passion and commitment has inspired generations of Americans to seek a decent future for all people. Modest and self-deprecating, a moral force in a turbulent world, Eleanor Roosevelt was unique.

The narrator's mispronunciation of words and especially names was jarring and detracted from the book.

Eleanor Roosevelt was a person born to activism and fairness. Sorry to say, many of her efforts have not been noted or acknowledged until now. If we had done our work then, Trump wound not be alining his dictatorship now.

I purchased both earlier volumes of Ms. Cook's masterpiece and read them in hard copy. I purchased this last volume here, on Audible. What a mistake! Oh, the book itself was great as would be expected from her earlier works. But my God, who picked this reader? Whiny and so frequently mispronouncing central figures here, one should be, I suppose, be grateful that at least she could pronounce Eleanor's name! Does no one in post-production actually list to books like this from beginning to end? This woman's voice, as stated by another reviewer, might be appropriate for Harlequin romances or young adult books. But--her juvenile voice is unsuitable to represent Cook's writing or ER's personality. I fought my way through this rather than returning it, gritting my teeth with each chapter. Whoever chose this poor reader for this great book should be horsewhipped!

last chapter was what I was waiting for

most of volume 3 seems to be a repeat of volume 2, we get to her life after FDR in the last chapter. I guess I'll have to read her two books to get insight to her spirit at the end. tommorow is today and you learn by living

I liked book one and book two better then this book. I think Eleanor was not as relevant during these years. The war years were covered better in Doris Kerns Goodwin’s book.

The narrator changed and I preferred the previous. Mainly I didn't like that she pronounced names of people from previous books in the series differently. Also, there was nothing about ER final days, how she dies, personal life after FDR died. Nothing about how kids and grandkids fared later on. Who did she live with? What happened to Hick? I did appreciate the UN info.

The material presented is stimulating and thorough. Well written and accurate and narrated as if it were a romance. What happened to the narrator for volume 2 of this biography? I so enjoy a good history that conveys not only the story of the main players but brings the reader into the environment of the events. This biography does provide that content;however the narrator who has a lovely voice sounded as if she were sharing a romantic novel rather a picture of a primary player in the events of the 20th Century.