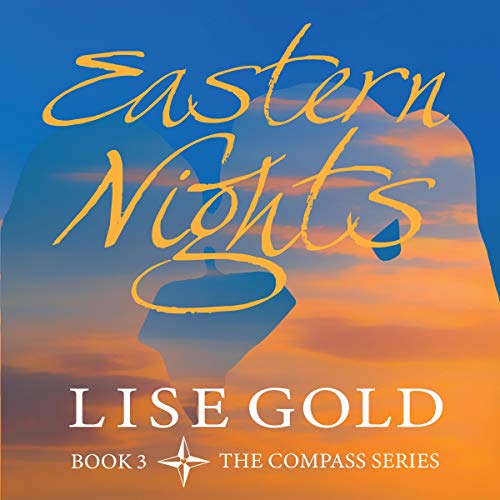 Eastern Nights is part of the Compass Series but can also be listened to as a stand-alone.

Felicia Perez, a carefree, hopeless flirt from Miami, is working a second job as a fitting model in Bangkok while saving up to expand her own clothing line. She loves women and her freedom and never shies away from going after what she wants.

Kate Simmons is a passionate interior designer who is married to her job. Her love for beauty is universal; she can’t imagine tying herself down to anything that might limit her enjoyment of it, and that includes the shackles of a relationship.

When they meet in a hotel bar in Bangkok, they are instantly drawn to each other, but with both being used to having the upper hand, the situation is confusing to say the least. When two hunters cross paths, will one end up being the prey?

Together, they embark on a journey of self-discovery in the beautiful surroundings of exotic and mystical Thailand. Is the irresistible attraction between them merely the excitement of finally meeting their match or is the universe trying to steer them in the right direction?

I like this series. In fact, I like it so much I gritted my teeth through the first two books even though the narrator grates my nerves. I was really, REALLY hoping the 3rd book had a different narrator. It does not. She’s...not good. Her accents have been painful since book one, she pauses in awkward places and her intonation is odd to say the least. It’s like she recorded the books as she was reading them for the very first time. Ugh!!! She really ruined some very enjoyable books for me. Save yourself and just read the books.

Love and sightseeing in Bangkok

I found it a really enjoyable read, but more for the discovery of Bangkok and other spots in Thailand than the romance. At least in the beginning. As the story and the characters developed I became more attached and felt more and more for them. I finished the listen with a satisfied sigh - It's been a pleasant travel company during some long and otherwise boring drives.

This could act as a stand alone perfectly as the setting was fabulous and the characters perfectly developed. I’ve loved this series and am happy that Kate got her own HEA!! Plus the narrator, Addison Barnes has done an amazing job of maintaining voices throughout all the stories and makes it incredibly easy to hear the dialogue exchanges.

What is happening to me?

I’ve never been into the romance genre but somehow I’ve fallen in love with Lise Gold’s stories. After trying Scent of Rome , I thought I’d try the Compass series. Clearly, I’m all in.
I’ve been alternating between my typical types of reads & Ms Gold’s books, but lately, the alternating has fallen off & I’ve primarily been sticking to Ms Gold & Ms Barnes. I’m a sucker for HEA.
And Addison Barnes does a great job, despite some of the naysayers. I’d be disappointed with a narrator change.

Lise Gold’s first book really captured the spirit of travel and long distance relationships. So far I’ve enjoyed every book in the compass series. In this book Hannah & Christine have supporting roles. The book focuses on play girl Kaye and how a sexy travel fling sometimes grows into so much more. Set in Thailand and Louisiana it’s full of a wide range of charming narration. I can’t wait to start the next book!

Third Book in the Compass Series

Felicia Perez is working in Thailand as a model while developing her own clothing line. She loves women and enjoys one night encounters with lovely ladies. Kate Simmons is an ambitious interior designer and work alcoholic who travels extensively for her business. After a chance encounter in a Bangkok bar they start a relationship that breaks all their rules about no repeats and no relationships. A journey of discovery in the beautiful setting of Thailand, a country that I love after living there for two years. A marvelous addition to the series by a favourite author. Recommend.

How great that all the books in this series are about different characters. These two were awesome apart, but the Awesomest together. Off to my next Adventure.

Now for something different

I understand the idea of giving the best friend from the last book her own story, but this felt so different I wouldn’t consider it part of a series. It’s a nice story. I like the detail you get about Thailand and commercial design and being a fitting model. As a stand alone book I likely would have rated it higher. Just don’t think you are staying in the same world as the last one as those characters are really insignificant in this tale.

Love under the stars

I am so happy with the whole Compass series. I love getting to know more about Kate and having her find her perfect match in Felicia. They are tremendous flirts and play the field,but together they set the night on fire. The way Lise Gold describes all the places and food in her stories is amazing. I feel like I step right into the book. I am already starting on the next one. I love this as an audiobook because I can feel all thee passion they have for each other.

Three out of Four Ain't Bad

Take a travelogue, mix in a few lesbian erotica short stories with a smattering from the first two books of the series and you end up with a mediocre novel, easily the worst book in the four book series. I didn't mind the narrator as much as others did, but it could have been better. If this is the first toe you've dipped into the Compass Series, don't judge too harshly, the other three are much better.