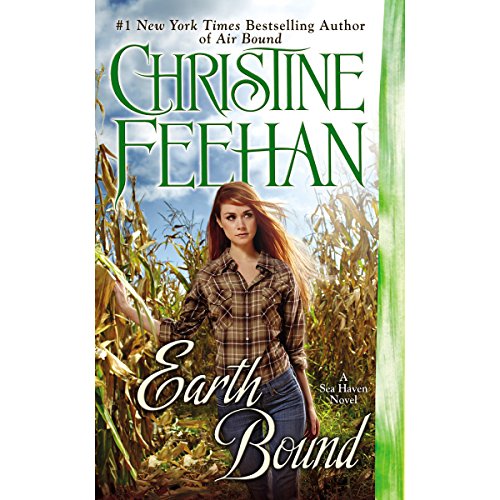 The number-one New York Times best-selling author of Air Bound returns to the mysterious coastal town of Sea Haven, where six sisters of the heart are bound by the elements, and one is stalked by an inescapable past.

After escaping from a cult, Lexi found refuge with her sisters on the farm that more than sustained her body - it nurtured her soul as well. But she never forgot the terror she left behind or the always present fear that the cult would find her again and claim her. Then her nightmare came true.

Lexi was discovered and threatened - only to be suddenly saved by a stranger. He is Gavriil Prakenskii, and he's awestruck by the woman he's rescued. She is destined for him. He can feel it in his soul. But how can Lexi find happiness with a man steeped in secrets and shadows, one intimately acquainted with violence and whose very love could be the death of them?

narration is hard to listen to

I am a big fan of Christine Feehan however this book not so much. It has a very slow start but the Worst part for me was the narration I can get beyond that man's voice . I didn't even get to finish the book because I just couldn't do it anymore , his character voices were not believable especially when it came to the women .

Would you be willing to try another book from Christine Feehan? Why or why not?

Yes it would be more than willing to try another book by this author however not by the same narrator .

Yes the performance could've been much better had it been maybe a female voice for another male narrator with the different tones .

I have been looking forward to this book for a year so I am pretty disappointed. I knew the story would be the usual Feehan story with lots of repetition, but I just love the Prakenskii brothers and the rest of the Sea Haven crowd. I was disappointed when the first book in this series, Water Bound, was narrated by a woman and the sample gave no examples of what her male voices would be, so I read the book instead of getting the audio. Books 2 and 3 both had great male narrators and I was very pleased with them. I was so happy to see that this narrator was male also, but he has been a big disappointment. First, he was miscast. His voice may be fine for some genres, but not for being a tough Russian. His voice is too high pitched and sounds more like a kindergarten teacher who speaks softly so that he doesn't frighten the kids. And there is virtually no Russian accent. This I blame on the editor. In addition, he pretty much just read the story. Due to the narration, I will be returning this book as I will never listen to it again.

As for the story, I've already mentioned that Feehan's books always have a lot of repetition, but I can live with that. Her men are always big alpha males and I like that. The women are a little more varied and usually very likable. I wish she would spend more time on the reunions between the brothers. So, in short, I would recommend this book, but in paper form, not audio. Again, like all Feehan books, there are explicit sex scenes. I'm happy with that but just want to mention it for those who aren't familiar with her work.

Four Down, Two to go

Earth Bound is probably not the best book to start with if you are new to the series.

While it is the fourth book in the "Sisters of the Heart" series(there are a total of 6 sisters of the heart), this is actually the 11th book set in the Northern California town of Sea Haven, where there is magic in the wind, and the real estate is sentient.

Books 1-7 detail the courtship of the seven Drake sisters, a magical family that lives in Sea Haven and protects the residents. The Russians show up in book #3, and we meet the Prakenskii brothers, seven magical siblings that are sort of a cross between James Bond and the Terminator with a strong dose of the Tin Man.

Prakenskii #7 courts Drake #6, then helps save Drake #7from a Greek billionaire. Prakenskii #6 is a minor character in book #7, and is facing certain death at the end of that story.

Book 8 (Sister of the Heart 1) we find that Prakenskii aren't so easy to kill.

Book 10 (Sisters 3) Prakenskii #2 sends Prakenskii #5 to protect one of the Sisters of the Heart from some very nasty bad guys. Prakenskii #5 ends up back in Sea Haven with the woman he was protecting, and 4 Italian orphans.

Prakenskii #4 will be the hero of the next book, and Prakenskii #1 will be in the final book.

Weaving through the whole series are a numbers of bad guys, a evil Greek billionaire, his equally nasty brother who runs a biker gang, assorted Russian mobsters, a couple of high ranking Russian government officials, and some loathsome religious cult members. Overall themes include the cost of human trafficking, both on the victims, and on the law enforcement professionals attempting to stop the trade.

By Earth Bound, the 11 book, there is a lot of background information that a new reader needs to know so that the story makes sense. The info dump could have been handled better.

An added complication is that Prakenskii's #6,#3 and #5 are now settled in Sea Haven with brand new American identities. So sometimes the brothers use their Russian names, sometimes they use their new identities.

The story is about 75% the courtship/love story between Lexi, and her destined Prakenskii. The balance of the story telling advances several of the ongoing story arcs, and the vanquishing of a collection of religious cult members.

Mike Chamberlain the reader, has a pleasant tenor voice, there are no irritating vocal quirk, and a minimum of verbal typos From a technical standpoint a very nice recording.

However, while Chamberlain is a professional reader, he is not a very skilled voice actor. There are paragraph length pauses between each sentence which really kills the flow of the action sequences.

Even more of a problem is that all of the characters sound alike. All the brothers, all the sisters, and the Italian kids. And everyone speaks in a generic American accent. Although he did try with the Italian kids, who sound different, but not particularly Italian.

This book in particular needed someone who could do character voices. Two of the Prakenskii brothers should have Russian accents, including the courting hero.

Phil Gigante who narrated the previous book did an excellent job, creating distinct voices for each of the characters. In summary, if you really liked Phil Gigante's performance in Air Bound you might want to save your credit, and buy a copy of the book to read. If your taste runs toward straight narration then this might just the reader for you.

If you could sum up Earth Bound in three words, what would they be?

The story was good, not the best, but still good. The narrator was just totally blah, almost monotone. I found it difficult to tell between the character he was reading, impossible even at time. Most of the brothers are suppose to have a Russian accent, it was only present for literally a single line in the beginning, even when he would use the Russian endearments, there was no accent. The book has actually had me nodding off in the beginning because the reading was so bland.

He had hardly any character variations in the voices and read very monotonously. He never used the Russian accent which is supposed to be present in many of the brothers.

The book was great. Not too much sex. Great plot. The worse narration ever. I could have done a better job myself. No inflection to his voice. Read the printed copy!

I am so glad that I read this book first before listening to audible. I have been waiting a long time for Earth Bound and I was not disappointed. Lexi and Gavriil's story is inspiring. I just love those Prakenskii brothers.The Sea Haven Series is awesome.

I REALLY wish a different narrator had been chosen to read the story. Mike Chamberlain was horrible. He sounded stilted and the story did not flow. He did very little to distinguish between the various characters and soon everyone started to sound alike. His reading does not draw the listener in and actually makes it very difficult to finish listening to the story. Please do not let him read any more Sea Haven books.

I was so very excited to read this book, having loved the drake sister books. Unfortunately the narrator was terrible and didn't do the Russian accents, and had no emotion at all. The story was okay, I found it repetitive in a few places and was hard to finish. I won't be listening to anymore books by this narrator but I might read the books.

Love CF's work, but this Narrator is ruining it

Get rid of this Narrator.

I've spent the first half of part 1 counting to see how long he pauses between sentences.

He reads it like it's a string of sentences

double spaced on the page.

One to two seconds between sentences.

Drags on the pauses like it's the space between chapters.

KILLING THE STORY FOR ME, and I didn't think I could ever say that about a Christine Feehan book. I am going to have to buy the printed book to read because this is miserable.

I will never listen to another book this man narrates.

Feehan has an awesome imagination but it didn't show in this story. I read the first few books in the sisters of the heart series and for me earth bound was too similar to air bound. If I hadn't read Air Bound I would have thought this an excellent story. It has a pretty long read time which deserves some brownie points too. I would have given this book full stars but I just can't because I'm too disappointed.

great story, bad narration it got very hard to listen to after awhile. change narrator.