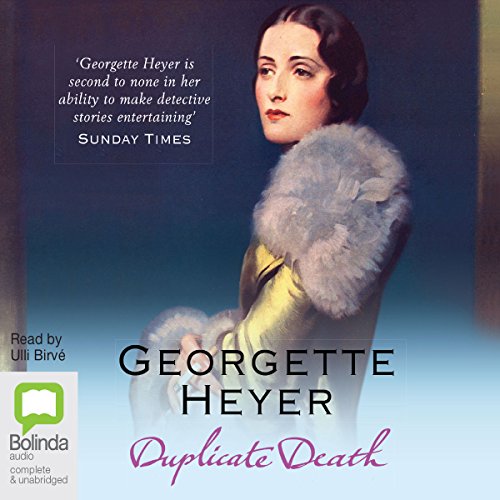 Inspector Hemingway has his work cut out for him when a seemingly civilised game of Duplicate Bridge leads to a double murder.

The crimes seem identical, but were they carried out by the same hand? Things become even more complicated when the fiancée of the inspector's young friend, Timothy Kane, becomes Hemingway's prime suspect. Kane is determined to prove the lady's innocence – but when he begins digging into her past, he finds it's more than a little bit shady.

While I don't find them quite up to the standards of her Regency novels, I do enjoy Heyer's mysteries, which were "modern" at the time she wrote them, in the 1930's - 1940's. Now they are period pieces, and interesting as such as well. Ulli Birve has now narrated most of Heyer's mysteries, and I have found all that I have listened to so far to be very enjoyable. I think that she "gets" the personalities of the various characters very well and conveys the spirit of the story, and the time period. And yet is easy to understand and follow the plot, which is important in a mystery.

One thing I find very helpful is that this book is "wispersync" ready, so I can go back and forth between my Kindle version and the audio version, or even read along with the narration. I enjoy "wispersync" and hope that Audible will make more of Heyer's mysteries available in this treatment, especially They Found Him Dead, which has many of the same characters as Duplicate Death.

I hope that Audible/Ulli Birve will soon release the two of Heyer's mysteries not yet available, Detection Unlimited and Penhallow.

This is the third book I've listened to by Birve, and I do manage to get used to her delivery, after sticking with it, but her reading style does detract from the way Heyer writes.

Try one of the other narrators on a Heyer who-dunnit before starting with this one.
And for those that also like to know things like this; the book does contain some swear words and using God's titles as curse words.

One of my Favourite Heyer Novels, Badly Read.

Ulli is generally a sound reader, differentiating between characters well, and keeping things interesting, but she is so bad at accents, I really think she shouldn't attempt them. Her American accent in the previous book (They Found Him Dead is the story of when Timothy is a child and he helps Hemingway with his work) was just as bad, but not as grating, as the Scots Highland accent is normally attractive, and hers attempt is really ugly.

Other than that, the voices and narration are good, and I'm a fan of the novel itself. It's textbook Heyer mystery material, with good characters and plenty to think about. If you're just as happy to read it, I'd go for the ebook or print edition. If you can't tell Welsh from Scots, it'll probably not worry you to listen to Ulli butcher poor Sandy's accent :)

Murder and romance what more could I want

I love this story and have read it several times and now I've listened twice. The narrator does a great job differentiating the voices which I enjoy.

Horrible attempt at an accent

This is not my favorite Heyer mystery, however it's a reasonable way to pass the time overall with a surprise ending that I did not see coming. If you like classic golden age mysteries, you'll probably enjoy the story pretty well. The reader is not overall horrible, she does opposite sex characters quite well, has a pleasant voice, and is able to differentiate between characters reasonably well. However, I bought this book in spite of the fact that one of the reviews on the U.K. website warned against the horrible attempt at a Scottish accent given to one of the secondary characters , because I thought they were probably being over sensitive. I was wrong. The butchering of this accent is so bad, it's really impossible to tell what accent the reader is trying to portray, and sometimes even what she is saying at all. She sounds like she's actually choking sometimes, and sometimes more like she's had a major stroke. I mean, the badness of this accent is so epic words can't describe it. This accent belongs to a secondary character, but he does have far too much to say (at least as read by this reader) towards the latter half of the book. I would recommend against this book based on that fact alone because it is very disturbing and unpleasant to listen to.

the time and place are depicted with wit and color. the reader is wonderful. the characters delectable.

Dialogue, a wide range of characters

Not many of whom are very likable, and an ingenious set of murders.

It's a very good Heyer thriller. A period piece certainly, but that it is one of its primary appeals. It's also refreshing to hearth rollers and alas an author's viewpoint seeping or sometimes blaring through that isn't the reflexive unthinking political correctness that has progressively infected writers nowadays.

I think I've now worked my way through her vintage thrillers and so as do all others this good things come to an end.

I think Ms. Birve's readings are well suited to the Heyer works and I'll miss gearing her read as well.

I honestly can't figure out how Ulli Birve gets work at all. Her accents would even be adequate for a friend telling a joke at a bar. She really ruins the experience. It's a shame.

I liked this story. It was interesting and engaging. I normally like Ulli Birvé and have enjoyed several other Heyer novels narrated by her. But I have to agree with the other reviewers that her Scottish accent is about the worst I’ve ever heard. Most of the time the Scottish character sounded like a cat hacking up a fur ball - and occasionally seemed more Russian than anything else. He was so frequently unintelligible altogether that it made it hard to know what he said. Alas, this is major character in the story, so the annoyance is ongoing. It made it hard to enjoy the story, and I felt a bit relieved when it was over as a result. I would recommend the story with another narrator capable of a decent Scottish accent. And I would recommend several of the narrator’s other audio books. But this was not a winning combination.

Not as good as her romances

This is another inspector Hemingway mystery. It’s well plodded and I find the characters hold my interest well, but it’s not nearly as good or as involved as her mini romance novels.