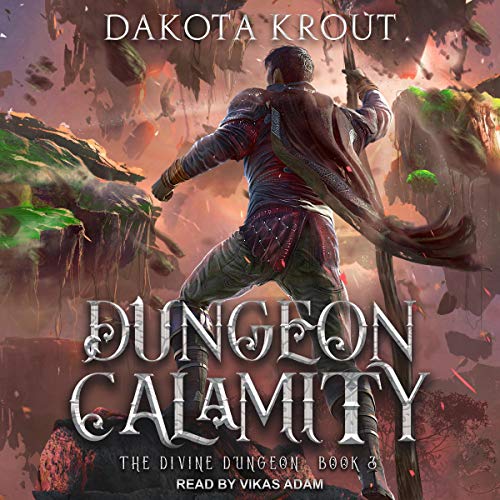 The dead walk the land. The dungeon rises. War will move the Heavens and the Earth.

Powerful necromancers are on the move, and the dungeon has become a battleground. Without his faithful Wisp, Cal's mind slips - he begins creating traps and monsters that go against his already loose morals.

A direct threat from an unexpected force causes Cal's mind to stabilize, but he doesn't know for how long. Using every resource at his disposal, he works to keep his mind clear while he funds a search for his lost companion. When others fail him again and again, Cal takes matters into his own hands.

Deadly situations remind Dale that no matter how well he does in his secluded community, he is still considered a weakling in the greater world. Deciding that his physical and mental training are not enough, Dale resolves to gain strength by any means necessary.

Both are aware that they need to keep moving. If they stop, their choices could kill them.

Dwarf erections that are just to damn funny.

Loved it. Kept picking it up outside my normal listening windows while driving. Goblin bob is def the best Bob in any universe and the voice work is stunningly fun to listen to. Also... Dwarf boners. Twice. I laughed both times. (if you don't read that and see that I find this book good enough to suggest it on that joke alone then... Read it anyways.)

Just a fantastic experience from dungeon born to calamity. I have listened to and read at least 80 fantasy books. None are as memorable and surprising as this series. Astounding work from both writer and narrator.

Such a good series!

I have had this series for about 2 months now. I've listened to it start to finish 3 times. It is one of my favorite series and I never get tired of it. I am an avid Dungeons and Dragons player/DM and this is right up my alley. The author did an amazing job and I love all the characters (Hans is my favorite though). I love the puns and the suspense and the growth of the characters. I hope he continues this series and can't wait to listen to more of it. Vikas Adam has become one of my favorite Narrators as well. His performance with this series is incredible. I enjoy the voices and the emotion he has. Sometimes, it can give you chills. I'm in love with this series and I don't think I'll ever get tired of listening to it. Thank you Dakota and Vikas for a wonderful story!!

for the love of books release faster i tell you. must finish this series noow!

I hope this story continues forever!

I hope this story continues forever! Changes the way you think about dungeons forever. Love it

Once again I was sucked into the story unable to pull away. This is simply a wondrous book.

I love what the story is coming to, but it hasn't reached its peak yet! There are still two more continuations. The next book Dungeon Desolation is already out but is not on audible as of the time of this review (1/8/19). I am eagerly awaiting the next books as I love the characters and the narrator portraying them. The conclusions that this book comes to alone is worth all three books combined. I would greatly appreciate the next book to appear on audible soon as I don't have much to listen to at the moment. Either that or the next book in the Completionist series would be most appreciated. If you haven't read it I recommend it. It is also by the same author and narrator. The first book is Ritualist and the second is Regicide. They are on par with this series. If you have also read those, I would recommend series such as the The Land, The Rogue Dungeon, or The Wraith's Haunt series which are all similar LitRPG's to this series

I've read the other two books in the series and loved those as well. The character development is realistic, but still dynamic. Some authors miss the idea that characters need regression as well as progression in character development, but Dakota Krout delivers believable personality growth for each of his characters. I especially liked Tom's development, and could see a deeper side of him in this book. The main characters are likeable, but it's the relationships of the supporting characters and their distinct nuance behaviors, delivered in both the narration and the writing, that gives a feeling of full emersion to the reader. Thanks for another great one, Dakota.

Was pretty great but ...

Loved the book up until the ending ..twist? It just felt so weirdly out of place and a bit forced. I would have enjoyed it a lot more if it ended differently. Honestly it hardly makes much sense to me. The only thing that went through my mind afterwards was ..why? I enjoyed the experience overall however. Great performance though. Narrator is amazing.

I love the humor and puns, i can't wait to see the series grow larger!

Great conceps and ideas for world, magic and characters! ...even measured by some decades of decent fantasy consume :) Never boring! Totally recommandable! ...not only for (ex)role player! ...just got the 4th part! :)

you will love this as the book before !

keeps getting better and better, pump to hear the next book and see how the main characters (1) will evolve haha (if you have not heard this book be ready for some awesome plot)

You have to know the previous books to understand even the least bit of what is going on but it is so worth it!!!!!!!!! my vafourite series on Kindle and Audible (red some where bewegen 400-450 books on Kindle)(Audible~120)

Engulfing Story. Absolutely worth it. Seems like i do have to write atleast 15 words, so dont mind this last sentence everything is said.

Perfect ending for this epic story

The third piece of the divine dungeon series continues the well known pattern of the first and second book, highlighting the most interesting stories of the several characters. The story intensifies again and I could barely stop listening to the book, completing it in record time. I especially like the subtle details , such as the puns or the story about the lightning cultivators. These references to other sagas and stories make the overall story more interesting. Also the detailed explanations about essence, mana and the laws really ties everything together. The ending was one of the best I have heard in a long time. I was about to cry and laughed at the same time as it truly was perfect and a fitting end(?) to the story.

Such an amazing Ending!

The conclusion of this standing trilogy is really awesome! A smart magic system, great characters and and ... I just really liked it. Is it top tier literature? Not by a long shot, but it's really really fun!

I finished the entire "The divine dungeon" series within 10 days. Very detailed and "logical" fantasy world. Many unforeseeable "aww/wow." moments. Great character development. I definitely recommend it to you.