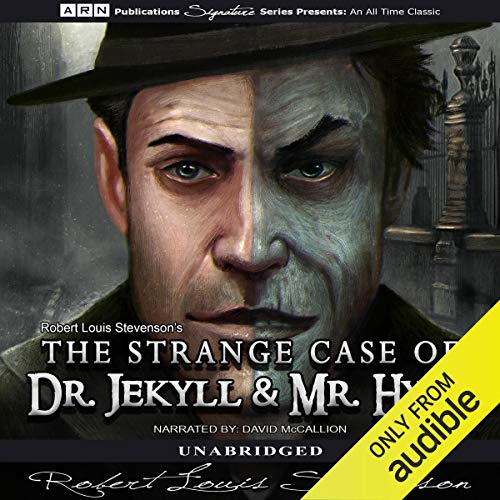 Dr. Jekyll and Mr. Hyde by Robert Louis Stevenson tells the story of the lawyer Gabriel John Utterson as he investigates some disturbing incidents involving his old friend, the talented doctor Henry Jekyll, and his mysterious and sinister new companion, Edward Hyde. The lawyer is worried about his friend after he changes his will to include Hyde in case of his death or disappearance. Fearing that the doctor is being blackmailed by the stranger, the lawyer sets out to confront him.

Upon meeting the man, the lawyer is repulsed by his appearance, although he can't quite put his finger on exactly what it is about the man that disturbs him. And when the subject of the newcomer is brought up with the doctor, he refuses to discuss it and begs the lawyer to leave Hyde alone. But when Hyde is seen murdering a highly regarded MP, Utterson begins to fear the worst for his friend. So when the murderer disappears, and the doctor starts to return to his old self, he is relieved that the nightmare may be over. But after the death of Dr. Hastie Lanyon, an old friend of Jekyll and Utterson, it starts to seem as if Hyde has returned. And when a shocking discovery is made in Dr. Jekyll's laboratory, the truth about what he's been up to starts to be uncovered.

The book was first published in 1886 and was a huge success; it has seen dozens of film and stage adaptations over the years and remains one of Stevenson's most popular pieces of work.

This version of Dr. Jekyll & Mr. Hyde is an instant classic and must own for any fan of Robert Louis Stevenson. The narrator, David McCallion, does a tremendous job with this book, bringing life to each character with their own voice throughout the book. My only wish is that he gave a bit more of a scary demeanor to the voice of Mr. Hyde, but don’t let that deter you from getting this wonderful rendition of an all-time classic story.

Some of the best novels ever published are those that focus on someone with a dark secret. Dr. Jekyll and Mr. Hyde is no different, and is one of the best classic tales of deceit, death, and confusion. Robert Louis Stevenson is a master at keeping my attention, giving only a few bread crumbs to lead me on the trail until the whole backstory is revealed. The good-natured lawyer Mr. Utterson is growing suspicious of Dr. Jekyll's friend, Mr. Hyde, especially when he discovers that Dr. Jekyll has drawn up paperwork leaving all his belongings to the strange Mr. Hyde should anything happen to him.

It seems that with every little misfortune that occurs in town, either Dr. Jekyll or Mr. Hyde are always involved. This fact again scares Mr. Utterson, and we eventually find out that Dr. Jekyll and Mr. Hyde are one and the same; Mr. Hyde simply represents the pleasure-seeking part of Dr. Jekyll who emerges from time to time. This, we know at the end, is destructive. Part mystery, part shocker, David McCallion takes us through all of the ups and downs of the trickery, the deceit, and the suspense this novel has to offer. Definitely a great addition to your audiobook library!

William Brodie would be proud!

Really liked the story. Didn't really like the narration though. Maybe due to the fact that this is my first audio book.