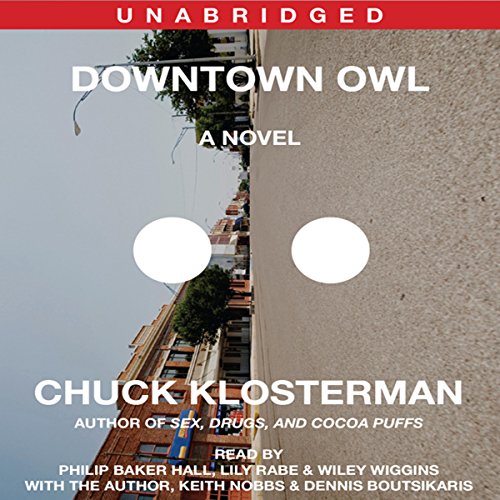 Somewhere in North Dakota, there is a town called Owl that isn't there. Disco is over, but punk never happened. They don't have cable. They don't really have pop culture, unless you count grain prices and alcoholism. People work hard, and then they die. They hate the government and impregnate teenage girls. But that's not nearly as awful as it sounds; in fact, sometimes it's perfect.

Mitch Hrlicka lives in Owl. He plays high-school football and worries about his weirdness, or lack thereof. Julia Rabia just moved to Owl. She gets free booze and falls in love with a self-loathing bison farmer who listens to Goats Head Soup. Horace Jones has resided in Owl for 73 years. He consumes a lot of coffee, thinks about his dead wife, and understands the truth. They all know each other completely, except that they've never met.

Like a colder, Reagan-era version of The Last Picture Show fused with Friday Night Lights, Chuck Klosterman's Downtown Owl is the unpretentious, darkly comedic story of how it feels to exist in a community where rural mythology and violent reality are pretty much the same thing.

Loaded with detail and unified by a (very real) blizzard, it's technically about certain people in a certain place at a certain time...but it's really about a problem. And the problem is this: what does it mean to be a normal person? And there is no answer. But in Downtown Owl, what matters more is how you ask the question.

This book is constructed in an episodic character-centric manner. The readers are well suited to their characters and I particularly loved Philip Baker Hall...He reminded me of Eli on youtube's eli the accountant channel. Klosterman has some good insights into 80's America...it's too bad that he's about 20 years or so too late, that makes those insights seem a bit facile. Nonetheless, the story is interesting and the narration fun.

I'm a teacher in a small town in Montana. The story is great. Many of the charactors are in every town around here. People drink in these towns and the weather is always cold in the winter. It's -20 outside right now. I enjoyed listening to the three stories and they captured small town America in the northern midwest.

This book is 9 hours. It takes 8 hours to get to the point. In those 8 hours of lead up, I was left asking "What is this book about exactly?" The narrators did a great job with a poor plot. In fact, what was the plot? At times, I felt like I was listening to the disjointed and narcissistic thoughts of a bunch of sociopaths. I kept listening...I kept hoping that the author would get to the point already. I kept trying to find one character that was redeeming. I couldn't. This was a complete waste of a credit. I will never read anything by this author again.

If I wanted to read a book about the ramblings of everyday life that takes 8/9 of its length to get to the beginning of a point...well, I wouldn't read a book like that. With audiobooks, you need something to grab you and propel you to keep listening. A plot that makes you seek reasons to listen to the book and continue the story. Not a plot that makes you switch your mp3 player over to music because the story is just so BORING.

I realize boring is an overused adjective, but it describes this story very well. The plot write-up for the teaser in the description is better than the book. Really. I looked at the positive reviews and I guess I'm not in the majority. But really, I can find nothing redeeming except the narrator performances.

I enjoy Chuck Klosterman's essays on music and culture, but didn't know how he would do as a novelist. Each character intertwines in small town life only to reveal epiphanies that reflect the human condition. It did help that I was the same age as the characters at the same time period in the early 80s, but the story stands on its own. The narrators bring this narrative to life and give it a depth that will stay with you for some time.

this authors stories are really good.. and funny.. enjoyed the nicknames.. sad at end.. great story.

Escape to rural North Dakota where everyone dreams to venture. Follow the lives of an underachieving High School kid, a saucy young female social studies teacher and stoic old widowed farmer. Sounds terrible right? It manages to be quite entertaining. The narrative device (each chapter of the book is broken down by character and delivered in third person limited) lends itself extremely well to audio (there are multiple narrators). The story is all about the bringing the town to life. This is not a plot that races forward. Like the town of Owl, the story trickles ahead with one day bleeding into the next. A trip to nowhere. It sounds terrible. Somehow, it gets 5 stars.

This is the first book that I have ever read by the author Chuck Klosterman. It is all about the characterizations of the people in this small town. I could have done without one of the key characters, Horace Jones, who was very old and quite boring. I liked the teacher, Julia Rabia, and I wish he could have dropped Horace Jones from the story altogether and given her more pages in the book. I also liked the high school football player, Mitch Hrlicka, and would have liked to have gotten to know him better too.

What did you love best about Downtown Owl?

I'm in the middle of this book but I feel confident I will enjoy it to the end. The language is so perceptive and the characters so unique. I love getting to know them all.

Usually I'm not a fan of multiple narrators but in this case the narrators brought so much to each chapter, giving each section its own special tone and character.

Chuck Klosterman captures North Dakota like a getaway man asleep behind the wheel. Hands up. Gotcha.

I enjoyed it. Really liked my time with the book, but I'm not sure how to process it. Maybe reviewing right after finishing is too soon.