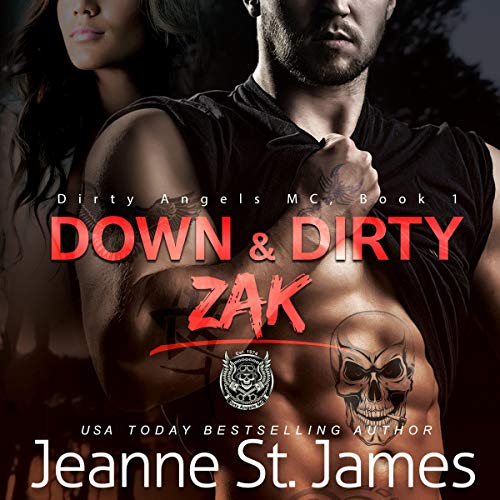 After spending the last 10 years in prison, Zak, former DAMC president, has a few priorities: to reconnect with his “brothers”, to get drunk, and to get laid. Not necessarily in that order. When he spots a stunning woman in the clubhouse and mistakes her for one of the club’s strippers, those priorities get a bit skewed.

Sophie has no idea what happened to her life. One minute, she’s totally focused on building her bakery business, and the next? She’s delivering a cake to the Dirty Angels motorcycle club’s “homecoming” celebration for a member who just got out of prison. Little does she know, baking that cake will change the rest of her life, not to mention make her a target for a rival MC. Normally, Sophie wouldn’t be caught dead with a man like Zak, a tattooed, ex-con, badass biker.

When a decades-old territory war threatens to rip them apart, Zak will do anything to keep Sophie, his club, and the town safe. But being from two different worlds, the threat they’re under may not be worth the risk.

From start to finish the author and narrators drew me in and kept my attention. I really love Ms. St James’s style of writing, she packs such a punch into her characters that they almost seem to be real.

Zak and Sophie are meant to be. I loved how Sophie was feisty and wasn’t afraid to stand up for her beliefs. Will Sophie be strong enough to become an old lady or will circumstances tear them apart? Sophie is one of those characters that is so easy to relate too, I absolutely adore her.

This story flowed well and was full of drama, humour and some mighty fine chemistry between Zak and Sophie that absolutely burned up my ears.

The narrators did a fabulous job bringing this this story to life and I was entranced.

Zak is getting realised from prison and there is a welcome home party. Zak mistakes Sophie for a stripper and ends up falling for her. However it takes awhile to convince Sophie. They have to go through a lot of ups and downs. The narrators Sean Crisden and Ava Lucas are awesome and bring the characters to life!

I've listened to every book in the series and what I like most is the author had the foresight to select some of the best romance male narrators for each respective biker. There's Teddy, Wen, Aaron, Aiden, CJ and now Sean. Jeanne St. James is one of my favorite authors and an automatic credit when I see a new release whether it's this series or another series. And Ava Lucas definitely holds her own as the women these men love. For me, this is one of the better biker romance series and looking forward to Dex's, Linc's and Crows story on audible. I also double dip....I read then listen...😄 These stories are edgy, raw, sexy and definitely dirty. They're not for everyone but they do entertain and thats why I listen...to be entertained.

⭐️ ⭐️⭐️⭐️⭐️ Zak is the first book in the Down & Dirty series and our introduction to the Dirty Angels MC. I loved everything about this story.
Alpha male ✅
Sassy heroine ✅
Sarcastic humor ✅
Steamy love scenes ✅✅✅
Sean Crisden and Ava Lucas both gave amazing performances ❤️

This is a great start to the Dirty Angels Series... I love Zac.... he's rough around the edges, but he's had a tough go of it. His family has never been there for him. I love when he meets Sophie. The chemistry between these two is exciting and HOT.. You need to check this series out..

This was weird to not listen to a book 1 of a series first but do it now after I think 8 but I am glad I did it this way personally because I knew the players and how some things are going to turn out. But it was more than just that the back and forth between Zak and Axel makes more sense now that I have the beginning. But I also love how hard Zak falls. Was this because of how long he spent away and he was ready or was it fate who knows all I know is I love the gruff exterior and the big soft underbelly. Those are my favorite heroes.

I really enjoyed Sophie’s attitude in the beginning and how she crumbles too. ;) It’s mutual no matter how it started it was fun to listen to her fall in love with probably the last man she ever would have seen herself with. I loved that she stands up for herself no matter what she feels that shows strength even if I wanted to shake her and say “can’t you see it's hurting him!”

Fantastic series I can’t wait for more.
The narration hello is amazing Ava lordy be that woman’s voice is … I have no words it’s that good no joke her male voice is delicious and if that makes me a creepy lady so be it. Once you listen for yourself you will get me. Sean Crisden is truly a perfect Zak his voice is exactly how I would imagine Zak’s to be.

First book in this series. Zak and Sophie are great together. Story is well-written and the characters are well-developed . Narration by Ava Lucas and Sean Crisden was excellent and easy to listen to. Definitely recommend this audiobook.

Biker and the Baker sweet and hot

This story is as delious as the bakers cupcakes and hot as the biker . Loved the story start to finish . I fell for all the characters I can't wait to see where the series goes from here. I'm now hooked on Jeanne St. James and the story was performed great. Definitely a must listen

An amazing start to a fantastic series!

Wow! I had forgotten just how great Zak's book was, it's been a while since I read it. Zak and Sophie's story was full of emotions, some humor, tons of steam, and action. A case of mistaken identity lands Sophie in Zak's bed his first day home from prison and he gets hooked. lol. Jeanne St. James has such an amazing way of writing that pulls you into the story, makes you feel like you're living it. Then the fan-freaking-tastic narrators pull you in even more! Ava Lucas and Sean Crisden did a fabulous job narrating Sophie and Zak, really making you feel the emotion.

This was an awesome audible book about finding love out of your comfort zone. I have read it in paper and absolutely loved the story but to have the voices in your head, it comes alive and you feel like you are part of the action. Sophie only wanted to get her bakery off the ground. Zak wanted to get back to his life and put his jail sentence behind him. Who knew that delivering a cake to his welcome home party would end up with an instant attraction and the best sex of her life? This book had it all - lovable characters that the listener becomes an instant cheerleader for, a plot filled with more twists and turns than a rollercoaster and emotions that have the reader going from laughing to crying and perfect narrators for the characters. Another great book from Jeanne St. James. I cannot wait for more from this series.