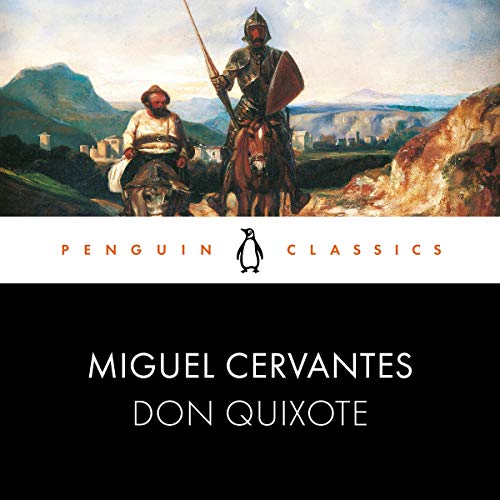 Don Quixote has become so entranced by reading romances of chivalry that he determines to become a knight errant and pursue bold adventures, accompanied by his squire, the cunning Sancho Panza. As they roam the world together, the ageing Quixote's fancy leads them wildly astray. At the same time the relationship between the two men grows in fascinating subtlety.

Often considered to be the first modern novel, Don Quixote is a wonderful burlesque of the popular literature with which its disordered protagonist is obsessed.

Doesn't do its original version in Spanish justice

This is a phenomenal story. If you speak and read multiple languages, put this down and find it in Spanish. The language throughout the book is great but its void of the romanticism that Cervantes uses in his language. No te arrepentirás!

A great and mildly humourous story narrerated phenomenally. Don Quixote tries instilling his mad wisdoms on the world surrounding him. The book could drag at times but it provided much needed depth to truly understand Don Quixote's nature.

The best novel I've ever had the privilege of listening to. A great translation - indeed it should be considered the definitive english translation.
All my homies dig it.