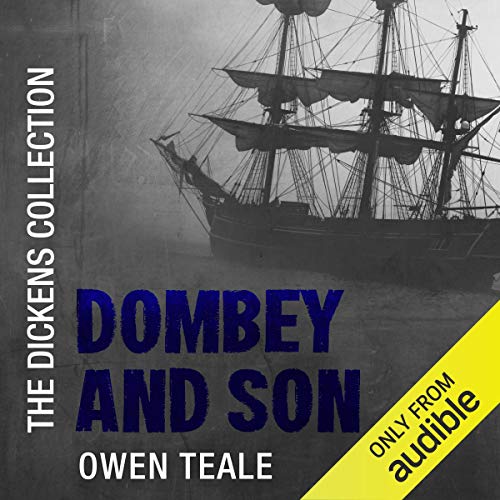 Audible presents an original dramatisation of Charles Dickens' Dombey and Son, first published as Dealings with the Firm of Dombey and Son: Wholesale, Retail and for Exportation.

A literary masterpiece in which Dickens' gift for vivid characterisation is at its best, this is the story of a powerful man whose inability to appreciate those around him leads to his lonely demise and, later, his possible redemption.

This edition features an exclusive introduction written and narrated by John Mullan, professor of English at University College London.

Paul Dombey, owner of the shipping company Dombey and Son, dreams of having a male heir to take on the family business. With only one daughter to speak of, his resentment grows and is often manifested through the neglectful if not abusive treatment of his wife, Fanny, and child, Florence.

Following the long-awaited birth of a boy, Mr Dombey triumphantly throws himself into the care and education of his pride and joy, his son, Paul, indifferent to the death of his wife following an arduous labour.

As his daughter grows in strength, beauty and kindness, his son's sickly disposition makes him weaker and weaker by the day. Despite the bond and friendship forged between the siblings, Mr Dombey continues to despise and resent Florence, and after a period of intended rest by the seaside, the family is once more rocked by a tragic death.

A touching and unexpectedly uplifting story of change, forgiveness and familial love, Dombey and Son will keep you gripped, moved and wholly surprised until the end.

With his father incarcerated, Charles Dickens had to abandon his studies at a young age and set to work in a factory so as to support himself. Despite his short-lived education, Dickens went on to write 15 novels, various articles, novellas and short stories. These include Hard Times, Bleak House, Oliver Twist, Barnaby Rudge, Little Dorrit and A Tale of Two Cities. He lectured and led campaigns for children's rights and education and arguably became the ultimate self-made man.

Taking into account the numerous characters in this story, Owen Teale’s narration is superb! Hoping he narrates another Dickens novel!

is it good story not great by today's standards. I had to work hard to slide through the archaic English to fully understand the meaning. the reader is excellent at distinguishing the various voices so that you know who's speaking at any time.