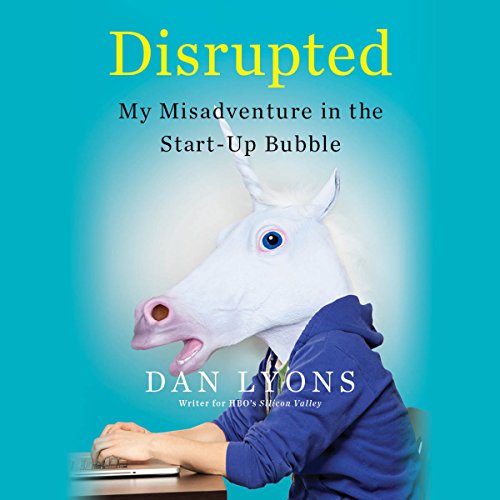 For 25 years Dan Lyons was a magazine writer at the top of his profession - until one Friday morning when he received a phone call: poof. His job no longer existed. "I think they just want to hire younger people," his boss at Newsweek told him. Fifty years old and with a wife and two young kids, Dan was, in a word, screwed.

Then an idea hit. Dan had long reported on Silicon Valley and the tech explosion. Why not join it? HubSpot, a Boston start-up, was flush with $100 million in venture capital. They offered Dan a pile of stock options for the vague role of "marketing fellow". What could go wrong?

HubSpotters were true believers: They were making the world a better place...by selling email spam. The office vibe was frat house meets cult compound: The party began at 4:30 on Friday and lasted well into the night; "shower pods" became hook-up dens; a push-up club met at noon in the lobby while nearby, in the "content factory", Nerf gun fights raged. Groups went on "walking meetings", and Dan's absentee boss sent cryptic emails about employees who had "graduated" (read: been fired). In the middle of all this was Dan, exactly twice the age of the average HubSpot employee and literally old enough to be the father of most of his coworkers, sitting at his desk on his bouncy-ball "chair".

Mixed in with Lyons' uproarious tale of his rise and fall at HubSpot is a trenchant analysis of the start-up world, a de facto conspiracy between those who start companies and those who fund them, a world where bad ideas are rewarded with hefty investments, where companies blow money lavishing perks on their postcollegiate workforces, and where everybody is trying to hang on just long enough to reach an IPO and cash out.

With a cast of characters that includes devilish angel investors, fad-chasing venture capitalists, entrepreneurs and "wantrapreneurs", bloggers and brogrammers, social climbers and sociopaths, Disrupted is a gripping and definitive account of life in the (second) tech bubble.

Well, the author is a journalist who tells the story of his 3 year work in a start up company in Sillicon Valley. Maybe what he tells about the extravagant and surrealistic atmosphere of the company is correct, however, his point of view has a lot of bias: - Throught the story he considers himselve absolutely above everyone, I came to the conclusion that he has a narcissistic personality disorder. - Throught the story you also see that he has always the impression that people thinking badly of him, so I cam to the conclusion also that he has a paranoid personality disorder, - Throughout the story you also observe that he doesn't have any empathy with other people and has actually a treasonous behaviour toward people who help him and who are empathic with him, so I cam to the concusion that he has anti social personality disorder, I really regret having heard his book and wasted my time on hearing what I believe is not at all a reality. My only takaway from this book is to be very cautious and not to recruit this kind of guy or to dismiss them as soon as I identify one.

This book was fascinating for those of us who watch Silicon Valley and its cycles of boom and bust. Dan Lyons, a fifty-something journalist whose last job was Tech Editor at Newsweek, finds himself suddenly unemployed and goes to work for HubSpot, a pre-IPO, cloud based business with a very young, tech-y culture.

He immediately experiences culture shock. His first desk has an exercise ball to sit on instead of a chair. He's given an orange wristband instead of a name badge. The CEO of HubSpot tells the NY Times that grey-hair and experience aren't valuable to the company. Dan, more than twice the age of the average HubSpot employee, starts to push back, because, he reports candidly, "I needed the paycheck."

I enjoyed learning about how venture capital works and what the risk and rewards are for those who speculate in tech start ups. His business writing skills are put to good use as he explores the numbers and the industry from the inside. I didn't enjoy his sense of humor as much. It came across to me as vulgar.

By the end of the book, I suspected Dan brought some of the problems on himself. He seemed to not understand that the status of his last position was his no longer. On the other hand, what kind of hubris must HubSpot be suffering from to hire a journalist with decades of connections in the NYC publishing world and tick him off without a non-discloursaure agreement of some kind?

The book has a happy-ish ending with Dan leaving HubSpot after making a bit of money on his options. Not for everyone, to be sure, but kept me hooked through the last pages.

Disrupted - - True Tales Inside The IT Bubble Too Little Too Late

What a great story. I am 60 plus and worked in IT since 1985 and aged out at 59 ..worked in the first Internet bubble 1999 for a Startup Software company had the IPO so traveled the same road and I love this work. This is accurate and funny, the devil is in the details and Dan gets these perfectly. Dan Lyons provides a more important act by putting a spotlight on the 'Disruptive' results of the culture where
internal bias's in employment practices are harmful. With a confident voice and a sense of humor Dan relates the situation from his experience POV in such an interesting and intelligent way that I am recommending this and highly rated it.

This was one of those audiobooks that I listened to, any chance I'd get, throughout the day, and in bed, before going to sleep. Truly a page-turner.

At risk of sounding like a cheesy commercial, I'll say Dan's book is superbly written, as only a skilled writer could have written it:

It's one of those books I look forward to enjoying again. Fully.

As to HubSpot: Dan didn't just do a "sensationalistic inside mole" kinda book here. The book presents a welcome view and perspective on modern work culture, inside companies like HubSpot, where young people are preferred, the company has been engineered from the inside out to be fun to work in and almost becomes a religion you adhere to. Until you "graduate" that is. Graduate is HubSpot-speak for laying off an employee. A phenomena brilliantly described in Jesper Kunde's Corporate Religion, many years ago. Also in Funky Business by Nordstrom and Ridderstrale.

Get the book. It's fun and informative!

The Truth of hi tech companies

An excellent, and well written biography of life in a hi-tech company. It may be written from the perspective of a startup, but that kool aid infects the thinking of even the longest established businesses. I recognize the disfunction, and the warping of good ideas by people with minimal business or life experience. Well written, humorous, and explains the lessons anyone working in a startup learns the hard way.

What was one of the most memorable moments of Disrupted?

The description of awful management and HR techniques is spot on.

Absolutely. I couldn't put it down.

I love the truth of being wrapped in a broken culture but still trying to be a good corporate citizen.

Would you consider the audio edition of Disrupted to be better than the print version?

Usually, authors make terrible readers, but I loved the honesty and emotion Dan Lyons brought to the performance of his book.

What other book might you compare Disrupted to and why?

I have read several books by and about tech entrepreneurs, but this is the first to reveal the silly and sometimes weird and icky reality behind all the hype. The book I have read that covers most of the same ground is The Sociopath Next Door. Seriously.

Which character – as performed by Dan Lyons – was your favorite?

Dan, of course was my favorite. I began to hate the character Trotsky, and felt compelled to research the despicable real man on the Internet. It horrifies me that the characters in this book, some newly minted billionaires, are still out there raking in the dough and contributing nothing of value to the world. If innocent people would not be hurt I would hope the bubble bursts. But of course, innocent people will be hurt, and that's tragic.

I am now a Dan Lyons fan.

Many levels of irony

Lyons spills a lot of ink pointing out the ironies of the tech bubble and of HubSpot - and there is plenty of fodder. Less funny is his own lack of awareness about his arrogance, his at times downright nasty behavior toward coworkers (no matter how ridiculous some of them were), and his subtle undertones of sexism (jokes about vocal fry - really?!) I could have done without his rants about Trotsky for the last third of the book and his feigned innocence throughout. As much as I enjoyed the jokes about Silicon Valley and HubSpot, it takes an idiot to believe that Lyons hatched the book plan only after working in earnest at the company. This was planned - smartly so - and his fake "who me?" quickly becomes grating. Still, the beginning is a fun read.

As a former Netscaper, this hit home

After working 22 years in The Valley this was cathartic.

What wasn't mentioned in the book was that rank and file employees are usually subject to a post-IPO 6 month lockout from selling shares. That allows the execs and investors to cash out leaving the employees holding the bag.

The inflated titles, the lack of any real experience...it all comes down to how soulless you are to participate in the charade.

Dan Lyons had been laid off from his job as a technology editor at Newsweek. In his hunt for a new job he was hired by a Boston start-up company called HubSpot. On his first day of work Lyons realizes he is out of place. He is a 52-year-old, married with children and drives a Subaru outback. His fellow employees are very young, single, wear orange colored clothes (the company color) and sit on beanbags. Lyons states it was like a Montessori frat house. Lyons was hired as a marketing fellow and also was given some stock options. It turns out the company created software for sending out spam.

Lyons tells of his time at the company and his problems with the loose way the company was run. The book dramatically shows the difference between the ages. The book reveals some important social issues that society needs to address such as age discrimination.

The book is well written and in many ways it was hilarious. Lyons sheds some light on some troubling issues in the start-up culture. Lyons narrated the book.

Had me hooked all the way to the end. Excellent.

Not all authors are great and reading their material. Lyons is an exception. Excellent and much deeper and thought-provoking than expected.

So useless, gives you zero insight, just a personal revenge of an incapable employee. Very boring. Waste of time and money.