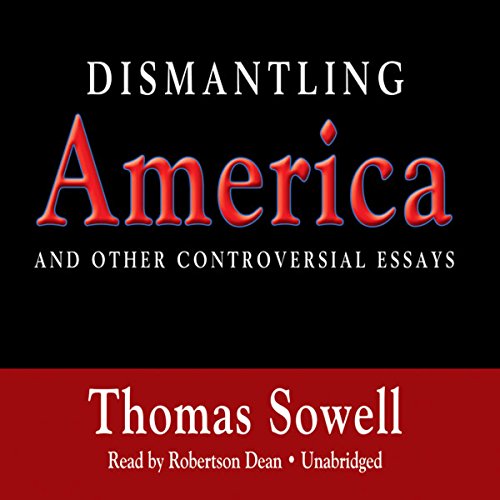 These wide-ranging essays - on many individual political, economic, cultural, and legal issues - have as a recurring, underlying theme the decline of the values and institutions that have sustained and advanced American society for more than two centuries. This decline has been more than erosion. It has, in many cases, been a deliberate dismantling of American values and institutions by people convinced that their superior wisdom and virtue must override both the traditions of the country and the will of the people.

Whether these essays (originally published as syndicated newspaper columns) are individually about financial bailouts, illegal immigrants, gay marriage, national security, or the Duke University rape case, the underlying concern is about what these very different kinds of things say about the general direction of American society.

This larger and longer-lasting question is whether the particular issues discussed reflect a degeneration or dismantling of the America that we once knew and expected to pass on to our children and grandchildren. There are people determined that this country’s values, history, laws, traditions, and role in the world are fundamentally wrong and must be changed. Such people will not stop dismantling America unless they get stopped—and the next election may be the last time to stop them, before they take the country beyond the point of no return.

“For anyone looking for a straightforward and honest discussion of the origins of our current crisis, informed by a deep understanding of both economics and politics.” ( Washington Times)

This book is a rehash of previous articles but not having read Sowell before, I found it to be a good introduction to the author. Numerous issues are covered with specific examples given. Sowell's descriptions and analysis are logical, consistent throughout and easy to follow. I will be purchasing more of his books.

Clear and concise and interesting

Where does Dismantling America rank among all the audiobooks you’ve listened to so far?

Among the best of current events and thought provoking concepts..

Turned My World Upside Down!

Would you consider the audio edition of Dismantling America to be better than the print version?

It is for me. It does well for my inability to follow a long storys. These are articles Thomas
Sowell has collected and put in a book format. I can learn by listening to a couple topics and then return later for more.

What other book might you compare Dismantling America to and why?

Other Thomas Sowell Books. They are all amazing and similar in how he writes and teaches.

What does Robertson Dean bring to the story that you wouldn’t experience if you just read the book?

Musings of a genius unimpressed with himself.

This book explains how America has morphed into what you see today. Its not the country I once knew. If you read any Thomas Sowell book you will never be the same. This unassuming man tells it like it is and calmly explains what is happening right under our noses! Like he says in the book "Its not too late. We still can turn this ship around"

Views of a man who is an American treasure!

Dismantling America is a large number of Thomas Sowell's syndicated newspaper columns concerning the dismantling of the US and how to undo the damage. Dr. Sowell is a conservative/libertarian black PhD economist in his 80s who also happens to be the the public person that I most admire.

Sowell writes with a clarity that few can match. This marvelous book is among the best I have listened to. His combination of extreme intelligence, knowledge, sense of irony, clarity of thought and expression, and common sense is unique.

This is only my second review of a Sowell book on Audible, but I have reviewed others at Amazon. Despite his age he remains prolific.

A Black Conservative I Greatly Admire

One of the best books (compilation of op-ed pieces) I've ever read. Sowell's descriptions and analyses show good old common sense and are easy to follow. He is presently a Senior Fellow at the Hoover Institute at Stanford University. Being an economist, he has great insight into how the economy responds when politicians try to control it.

Sowell predicted that, given a second term, President Obama would dismantle America. Obama sees it as "transforming" America. But his transformation is not good for America and the world. I have to believe that we will find our way back to conservative principles that ensure opportunities and jobs for all, especially for blacks and poor folks.

Also, the reader was excellent!

Another thought provoking books from Sowell.

An excellent book and one that will make you think about what is happening in this country.

If you're a Sowell reader, you already read this stuff. Includes previously famous articles and there is even a chapter of one sentence aphorisms. A crass $ grab? Say it isn't so Tom.

a great book. this might even be more valuable today than it was when it was originally written. very good insight from a man who knows what he's talking about without being politically motivated.

Thomas Sowell is my new go to...

This was a great history lesson ...as to politics relates to real world problem solving.

good book. very thought provoking. I will definitely be reading more by Thomas Sowell. a must read.