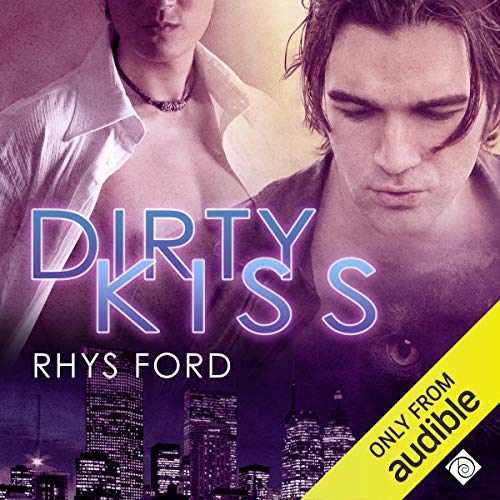 Cole Kenjiro McGinnis, ex-cop and PI, is trying to get over the shooting death of his lover when a supposedly routine investigation lands in his lap. Investigating the apparent suicide of a prominent Korean businessman's son proves to be anything but ordinary, especially when it introduces Cole to the dead man's handsome cousin, Kim Jae-Min.

Jae-Min's cousin had a dirty little secret, the kind that Cole has been familiar with all his life and that Jae-Min is still hiding from his family. The investigation leads Cole from tasteful mansions to seedy lover's trysts to Dirty Kiss, the place where the rich and discreet go to indulge in desires their traditional-minded families would rather know nothing about.

It also leads Cole McGinnis into Jae-Min's arms, and that could be a problem. Jae-Min's cousin's death is looking less and less like a suicide, and Jae-Min is looking more and more like a target. Cole has already lost one lover to violence-he's not about to lose Jae-Min too.

Almost better than the book!!! And I love the book

Where does Dirty Kiss, Book 1 rank among all the audiobooks you’ve listened to so far?

One of the best! Great narrator. Knowing the whole series and the characters throughout, Greg Tremblay plays Cole perfect! His change in character voice is great as well as his singing voice (hehe Scarlet) He is a little aloof in the beginning, but that is Cole to a "T"

What was one of the most memorable moments of Dirty Kiss, Book 1?

Ugg, so many, probably when Bobby tries to get Cole to admit he misses Ben!

The first scene being chased by the older woman in Leather.

Yes, but not possible but will listen again

Now I am bugging Rhys for the second installment!!! Great series, Her Sinners series is great too and a different narrator.

Greg Tremblay knocks it out of the park!

Would you listen to Dirty Kiss, Book 1 again? Why?

Absolutely - Greg Tremblay is so wonderful that I would absolutely listen to this again.

Would you recommend Dirty Kiss, Book 1 to your friends? Why or why not?

Rhys Ford builds a great world, with relatable characters and enough action to make your heart hurt for all that she puts them through.

Holy hell! I LOVE Greg Tremblay's narration. That alone jumped this book up to 4 stars for me. This was a book I didn't really connect with while reading, mainly because of all the Korean and honorifics...but listening to Greg Tremblay? I so easy to devour this series!!

Rhys Ford - you got so lucky with this narrator. He made your book come to life!

Rhys and Greg are a match made in heaven

This is a case where the audio version is so amazing as to sometimes surpasses the written word. Greg Tremblay totally gets what Rhys is writing and he “performs” the story, not just reading it.

There are times, and I have said this before, where you feel like you are listening at the door, or listening to a movie soundtrack, instead of a simple narration.

It is supremely excellent.

Each character has a distinct and unique voice, and Greg even has a great singing voice.

I give the audio version a 6 out of 5 because it is Rhys’ words performed so excellently by Greg that together, the combination surpasses the book as an experience.

Wow, I thought I loved these books when I read them. Greg Tremblay takes this series to a whole new level. I am a major Rhys Ford fan. I have read everything she has written. Hearing her words in Greg's voice was truly a wonderful experience. This is one of the rare times where a narrator completely nails how I thought the MCs voices where in my head. I can tell that Mr. Tremblay "gets" Ms. Ford's words and his interpretation of Cole and Jae is spot on. This is a winning combo.

Oh yeah, and the story is awesome too, but that is a given. Ms. Ford writes wonderful mm romance mysteries weaving in aspects of Korean culture and how difficult it is to be gay and Korean. Her characters have tremendous depth. Cole has a tragic past and demons he must confront, while still being loving and witty with his friends and real and adopted family. Jae Min is a wonderful and loving man who is just trying to do the right thing for everyone. But he is forever torn between his family obligations and his heart. There are four books in this series so far and it is (hopefully) far from over. Soooo worth a credit.

Not just about the sex

The author has crafted a well-written novel that is more of a week-long slice of life story than simply a m/m romance. There is, however, a sparking beginning of a relationship here..... you know: that time when you've just met and you get weak knees and can't think about anything else. And sexual relations of a fairly explicit nature are part of that, for sure, but these scenes are merely part of what's going on in the days and nights of the main character in this first-person narrative. They fit into the entirety of the book seamlessly and are exciting.

The narrator purrs these scenes out rather then merely reads them. He also does a great job with the accents, not that I know what a Korean accent really sounds like, but the narrator gives the various people different voices, plausibly Asian.

As for the mystery aspect, I am not a mystery-genre person in general, but the mystery in this story took a back seat, again, to the slice of life aspect, so it worked for me. I don't want to figure out "who dunnit," I just want a good listen and that's what I got with this book.

I often don't order the second book in a series even when I enjoyed it because I want to sample around. however, the follow up to Dirty Kiss is downloading as I write this. I think it's due to the excellent writing and likable characters. The only reason I didn't give it 5 starts all around is that I reserve that for the books you want to read over and over, the ones that are destined to become classics in your personal library.

Definitely would recommend. The characters are like people in real life. One minute you want to hug them and the next you want to strangle them. The mystery kept me glued to the story and I do love a good mystery.

Jae-Sin. He was realistic about his situation and verbalized it very matter of factly. People from many cultures are faced with more difficult decisions when they're gay and many times throughout the story I wanted to smack Cole in the back of his head for not being more sensitive to this. I was thrilled when he finally got it.

Who was the most memorable character of Dirty Kiss, Book 1 and why?

Jae-Sin. He faced his life with dignity and though I wouldn't have made the same choices he did when it came to his family, I understand and respect them.

Can't wait for the second installment.

What made the experience of listening to Dirty Kiss, Book 1 the most enjoyable?

The mystery. Most stories I can figure out by mid-book, Rhys Ford doesn't telegraph who the bad guy is.

I love Rhys Ford and definitely loved the story!

What made the experience of listening to Dirty Kiss, Book 1 the most enjoyable?

I've read the book and is fascinated by the story and it's characters, so I was excited to hear the audio book version. The enjoyable part was the story itself.

I haven't listen to Greg Tremblay's story before, so I can't compare it to other stories that he might have narrated.

Who was the most memorable character of Dirty Kiss, Book 1 and why?

Actually all the characters where great.

The story was excellent, but the narrator was kind of dull to express what the characters in the story are really like.

Where does Dirty Kiss, Book 1 rank among all the audiobooks you’ve listened to so far?

It's up there because of the wittiness of Rhys writing and the incredible performance by Greg! This is my first ever book review and I felt compelled because I want more books to be narrated by Greg.

What was one of the most memorable moments of Dirty Kiss, Book 1?

Not sure. What I hope gets revealed in one of the sequels is why Ben went bonkers.

Can't praise Greg enough! He really brings the characters to life and his Korean accents are wonderful!

When Jae caves. He doesn't want to feel for Cole but he can't help it. The sex scenes are great too (wink).

Would love to see what Greg can do with Rhys' Sinners series. Book 3 on ebook is coming out soon but it will be great if the audiobook was done soon also.

I am tossing this one back. The narrator is so bad that after an hour, I am totally done.

It might make a decent read, but truly a horrible listen.