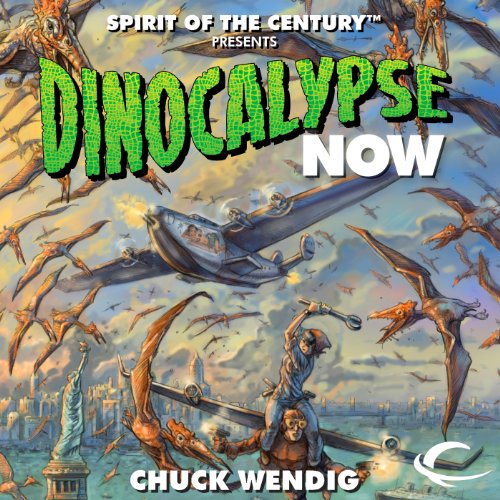 When the Century Club is called in to prevent the assassination of FDR, it’s just another day on the job - but what they discover puts not just the president, but the entire world in jeopardy.

With psychic dinosaurs taking over Manhattan and beyond, it’s up to Sally Slick, Jet Black, Mack Silver, and the other Centurions to save humanity - from extinction!

Spirit of the Century™ Presents: Dinocalypse Now, a novel by Chuck Wendig.

"A fun pulp-style romp. Wish I’d thought of it first!" (Brian Clevinger, author of Atomic Robo)
"Thrills! Chills! Stalwart heroes! Mad geniuses! A Conqueror Ape! And a whole lotta dinosaurs! Chuck Wendig’s Dinocalypse Now takes on the Golden Age of pulps and beats it at its own game." (Stephen Blackmoore, author of City of the Lost)

Would you consider the audio edition of Dinocalypse Now to be better than the print version?

Honestly, no, but that's because I love reading books myself and imagining my own characters. That said, this audiobook is definitely one of the best I've listened to. Looking forward to more in this series from the same narrator.

What was one of the most memorable moments of Dinocalypse Now?

There are loads of fantastic scenes, full of comedy, action and adventure, but without wandering into spiler territory, let's say the opening fight around the Empire State Building. Don't cross FDR!

His character voice work was fantastic! His Professor Khan took a bit to get used to as it was the most dramatically different from my own imagination, but after a chapter or two, it started to feel right, and I really got into it. I think it'll always be how I hear the Son of Khan from now on! Mr. Wyman's pacing is fantastic as well, and the chapters flowed at about the pace I expected them too.

It made me alugh throughout, from the wonderful characterisations to the action-packed combat. The finale was suitably dramatic and emotionally charged, and leads directly into the sequel.

Dinocalypse Now is a wonderful piece. Having read it myself prior to the audiobook, I can also say that the audio is a faithful presentation of the story, well crafted and narrated with genuine life. If you've been starved for some new pulp adventures in the style of the classics, such as The Lost World, or Doc Savage, then Dinocalypse Now is a must-read, or, in this case, a must-listen!

Just what I was looking for

My husband and I have been craving some good pulp fiction. It's been surprisingly difficult to find. It occurred to me that the creators of the spirit of the century role playing game may have written material to coincide with the Rpg templates; like legend of the five rings or 7th seas. We were delirious with joy to see they had!
It's witty and the best kind of ridiculous. A quick read. My only minor complaint would be the authors aversion to writing fight scenes. He tended to "skip to the end" of a scene which means the story always moved along at a brisk pace but was an obvious break.

You are going to want to go ahead and pick up "Beyond Dinocalypse" at the same time you get this one- just TRUST ME. This is a good story- lots of action & adventure. There are a lot of characters to keep track of but each one brings something unique to the story.

Oliver Wyman gives another wonderful performance with this book.

Note: Knowledge of the Spirit of the Century game is not necessary to enjoy this book.

Only For Target Audiences

Psychic dinosaurs, intelligent warrior apes, Neanderthals from the past, mid-century Superhero types, Atlantis, Hawaii -- I do believe there is even a kitchen sink in there somewhere. Chuck Wendig makes the most of his assignment to bring the Spirit of the Century role playing game into a fast-paced pulp novel. And it's probably super-fun for any of its target audiences -- gamers, comic book fans, YA boys.

For the rest of us, maybe it will grab you and tickle your fancy, but probably not. What's the audio equivalent of skimming? That's what I did, not immersing myself in the listen, but still able to follow along and have a little fun with it once in a while. But overall, there's really nothing here for me. It's harmless at best. But i will not be continuing with the series.

I wanted to like/finish this book …

I kept falling asleep while listening to the audiobook?!

I’m a sucker for wild, weird SciFi/Fantasy stories, especially if they are part of a series as there is a longer payoff for time invested in the characters/learning world lore. However Wendig, the author, just couldn’t hold my attention. I’d back up & try again, listen at different times of day, etc. but nothing worked. Once it became brute force repetition/persistence, I decided to throw the white flag.

Apparently this series is based on a TTRPG, which could be interesting. I just wish they had chosen a more competent writer to giver their game legs in another format.

2 Stars - I gave it +1 for world/setting (inherited from TTRPG), but the writing is immature & overly simplistic, yet includes subplots that don’t further flesh out the story.

I don't know when this was written - I saw a 2013 date but maybe that's when the audio was made - but the really gross sexism is more than I could stand, especially when combined with the otherwise juvenile storyline.

Wendig has a lot of fans, so I have to assume his more recent novels are better than this but I am not inspired to use a credit to find out. This was free but I will never get my wasted time back.

Not Bad... Feels like an unorganized jumble of ideas thrown together

This is a fun, entertaining retrofuturistic adventure. There are steam punk, magical and genetic manipulation elements all circling around hollow earth theories, timetraveling myth and Atlantean legend.

Mr. Wyman does a fantastic job narrating, which I feel is one of the reasons I enjoyed this book.

This book introduces a myriad of characters however it gives little to no background on any of them. Despite this, I did find myself liking most of them and wanting to learn more about them.

There are two more books in the series, which I will probably… Eventually, listen to him. Are primarily in the hopes of learning more about the characters that I enjoyed and less about how the story unfolds. On that note this book ended on a cliffhanger.

Great plot
Terrible Ending!!!
I could not believe they let it end like that. Awful.

The story just didn’t draw me in. I listened to it just to find I didn’t remember a bit of what happened over the last hour. Ran it back and listened to it again just to realize that hour could have been 10 minutes. The characters personal struggles would have been better expressed with back stories, rather then having to hear every thought.

Listening to everyone’s thoughts takes all the action out of the action scenes.

I'm anxious to read another book by Wendig; most of the reviews of his horror and adventure books are very promising. Unfortunately I can't seem to get bast Wyman's reading style, which suffers from a cadence which, once noticed, I found gratingly predictable. Wyman's a fine actor during the dialog parts, and manages a nice range of characterizations, but his narrative tone just frustrates me.

I'm going to re-read the book in text format and see if I have a different impression. As it was, I couldn't wait to be finished and move on to a different book.