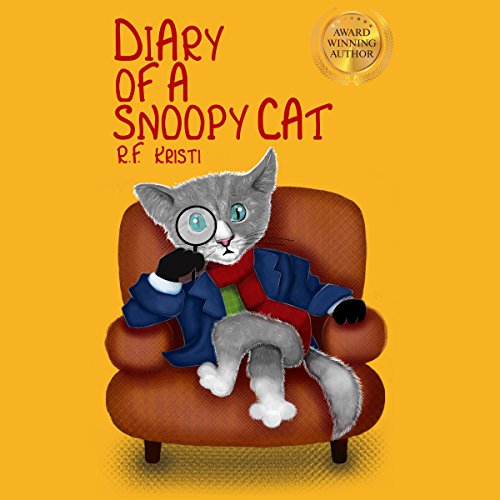 Diary of a Snoopy Cat

Inca decides to start a diary! Listen to the hilarious and breathtaking antics of Inca and her family of furry friends as recorded through the eyes of Inca. A heart-pounding saga unfolds.

When Inca and family move to London from Paris, they make a whole new set of friends, including Monk, a Blue Russian cat, and Terrence, a golden retriever who ably and bravely assists his world-famous detective owner, Solo. Inspired by the adventures of her new friends, Inca sets herself the task of becoming the world's best cat detective and begins to keep a diary of her exploits.

When Monk arrives one evening with news of a meeting to take place later that night, Inca is excited and can't wait to attend. She is told of a perilous journey that must be undertaken by Solo and Terrence, who are to travel to the Himalayas to search for the missing Raoul, a friend who had failed to return from an expedition.

The departure of Terrence means that Inca can take on her first proper job; the baffling incident of Mr. Finchley's missing will. But does the young cat have what it takes to crack the case and save the tormented and ferocious rottweiler, Boss? And can she do it without the help of the wily old retriever?

I liked this, and how it was told from the animal’s view. It was a truly good book to listen to. One I would definitely recommend, and it is so adorable and just had me keep listening to and see what happened.

This is a pretty good children's book that throws in all but the kitchen sink, including very nice dialogues and story plot.

The book begins with a diary-style introduction of the snoopy cats and their environment before engaging junior listeners in a neat little mystery. This is an exciting and interesting book that I recommend for middle school students, cat lovers, and adults looking for a flat little mystery.

This is cute and fun cat and dog characters. They love to venture and working mysteries. A short and blazing story.

Diary of a Snoopy Cat will attract young listeners aged 8 to 12. Younger children will also experience the story if narrate to them. Animal lovers and pet keepers will like the story.

This book was so cute! I loved how developed the characters were, and I particularly liked how the story didn't just spin around one main problem, but there were many smaller mysteries to solve within the whole book. I loved it.

This is a good book for those children that are old enough to read for themselves with some ability. They will love the silly animal antics. If your child has a special place in their heart for our furry friends, they will love this book.

It is fun, it is entertaining and above all, it is one of a kind. I have never read any books like this before. I truly have fun listening to it. My kids liked it too and they want me to buy another book like this again.

It's a good book. It's an interesting storybook. The author tells about a snoopy cat who helped a wild dog. People will definitely like it.

It’s beautifully written that it really captures the attention of the kids. Talking animals aren’t real but it is one of those fantasies that interest the kids, it also builds their vision and creativity.