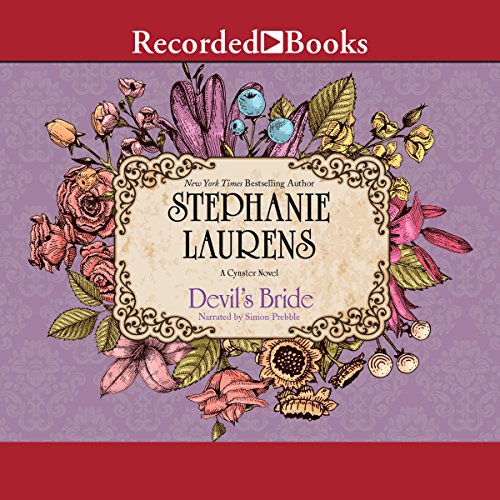 Governess Honoria Wetherby values her independence. She would rather travel the world than marry and give some man control of her life. Then, one stormy evening, fate changes all her plans. She stumbles upon a mortally wounded young man in the woods. When the stranger dies, she is trapped in a cabin with his body and with his newly arrived cousin, Devil, whom she soon learns is aptly named. He insists that their unchaperoned night together has compromised her honor, and, therefore she must marry him. Tension levels run high as Honoria plots to thwart Devil's marriage plans and tries to help him find his cousin's killer...the same madman who is now plotting to murder Devil.

Narrator Simon Prebble tantalizes listeners as he breathes life into these intriguing characters.

Not married to Hell

Laurens has such lovely prose, and I like her characters -- until she makes them say the same two things for fifty pages. I was having quite a nice time in the beginning. The dramatic meeting, the heroine's plight -- all of that was juicy stuff. And she has real skill at setting the scene.
Then the 6 hours of repetition begin. Hero: "We're getting married." Heroine: "No we're not."
That's it. For page after page. And then, it's Heroine: "Okay, I'll marry you." Hero: "Are you sure? You need to be sure. I can wait." For page after page after page.

And then, I don't know what happened, because I couldn't make myself listen to the end.

I don't mean to be a brat. The author is immensely popular, so there are clearly people who enjoy the kind of 'battle of wills' plot she creates. I'm just not one of them.

Over The Top Narration & Strong Characters

All of the Cynster books Recorded Books produced with Simon Prebble narrating are worth listening to, if only to wait for and truly appreciate the way he says "... and ... then ... she ... shattered!" That alone makes these books listen-worthy. It is in every single book. Wait for it...

Devil's Bride seems to be considered Ms. Lauren's best work. I probably agree. It started off with a very unique twist, especially for an historical romance. And the two main characters are both larger than life. I give Ms. Lauren's credit for creating heroines every bit as brave and stubborn as her heroes. And I also like that in her books it is typically the man who falls first and he has to work hard to convince the woman of his dreams to take him on. I also appreciate that she puts a plot in each of her books. It may not be plausible or complicated, but it is much preferable to so many historical romances that focus solely on the relationship between the two main characters.

But again, Simon Prebble's narration alone makes this book and all of the Lauren's books he narrated worth listening to. I doubt that I would ever have picked this book up in paperback.

I definitely enjoyed this story. It really had just the right amount of romance and mystery. Enjoyed Devil (hate that name though) and Honorias relationship, and the relative ease in which it came together. I really prefer when its not dragged out forever. There was a ton of sex in this book. A lot. Simon Prebble is a good enough narrator, though I tend to prefer female narrators, I wouldn't object to listening to SP again. It was, however, kind of awkward listening to him read the sex scenes, especially from the female perspective. Sometimes it made me chuckle. Lol All in all, I enjoyed the book and look forward to the next in the series.

I just don't understand why this book (or the entire series) had so many good reviews. I found the story to be drawn-out and boring. At the start it was promising and the narrator was good but as the book went on it just bored me to death. I can't recommend this one and I will not continue on with the series despite the rave reviews. I guess it was just not my cup of tea.

Simon Prebble will knock your socks off with his reading of this well written book. Laurens builds up and maintains the sexual tension between the hero and heroine from their very first encounter, but Prebble's performance brings it to life. You will not be disappointed.

Finally! The Book that Started it All!

OMG - I have wanted to listen to the early books in this series for soooooo long. I was so excited to see Scandal's Bride a few months back and now books 1 and 2 are also available. Devil's Bride shows the bar Cynster at their best. I loved how Devil knew Honoria would be his bride way before she did. However, he had to prove it to her. If you love this series - definitely read this book!

Not Exactly What I Expected

I started out really into this book. It is well written and there was a lot of dramatic tension in the first half. Of course, I knew it was a romance when I got it, but I guess I was expecting more mystery than romance. Right around the second half (not coincidentally, around the time the sex scenes started) the entire mystery element disappeared in favor of protracted sex scenes that were so long they became tedius. The first of them was well over an hour long! If you are into that sort of thing, then you may not have felt as I did that it really took away from the overall story, and I found myself fast-forwarding them to get to the actual storyline. The mystery element was set up well, but by 3/4 of the way, I was getting frustrated with the main character to figure out who did it, when I had figured it out several hours earlier. Overall, the story was enjoyable, but if all the books in the series feature the mind-numbing sex scenes this one does, I don't think I will want to listen to the rest of the series.

I would have dramatically cut the sex scenes, which I think would have made them more rewarding.

I LOVE Simon Prebble, everything he does is fantastic. His narration is half the reason I listened to this book all the way through.

First let me say that I enjoyed the narrator. His portrayal of "Devil" made me think of Liam Neeson's voice everytime. Sadly, Devil and however you spell her name are boooorrrrinnnggg. The gist of the book goes like this: governess chick says no, no, no, and big Devil guy says yes, yes, yes. Sex scenes were just too long with typical yucky adjectives for peices and parts. Oh, and there is this murder of somebody's family member that they talk about between the noes and the yeses. Great book to daydream thru, especially with my faux Liam Neeson voice whispering yes, yes, yes in my ear. I would wait until this book is on sale or free...not worth a credit.

Unsure who'd enjoy this - I suspect reading the book I wouldn't have picked up so much on how often the same adjectives were used over and over again . . .

What could Stephanie Laurens have done to make this a more enjoyable book for you?

If you are into romance novels, I highly recommend it. Love the characters, storyline and the narrator does an excellent job with all the voices