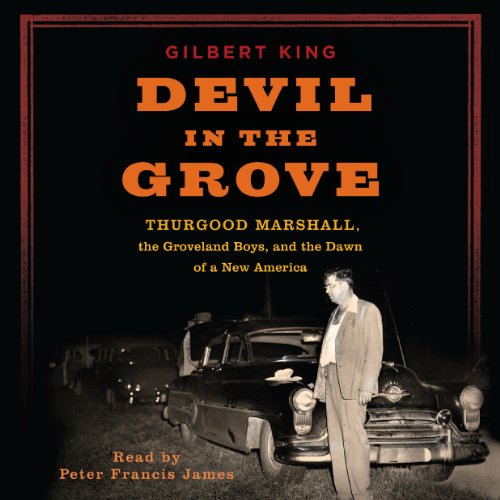 Devil in the Grove

Winner of the Pulitzer Prize

Arguably the most important American lawyer of the 20th century, Thurgood Marshall was on the verge of bringing the landmark suit Brown v. Board of Education before the US Supreme Court when he became embroiled in a case that threatened to change the course of the civil rights movement and to cost him his life.

In 1949, Florida's orange industry was booming, and citrus barons got rich on the backs of cheap Jim Crow labor with the help of Sheriff Willis V. McCall, who ruled Lake County with murderous resolve. When a White 17-year-old girl cried rape, McCall pursued four young Black men who dared envision a future for themselves beyond the groves. The Ku Klux Klan joined the hunt, hell-bent on lynching the men who came to be known as "the Groveland Boys".

Associates thought it was suicidal for Marshall to wade into the "Florida Terror", but the young lawyer would not shrink from the fight despite continuous death threats against him.

Would you listen to Devil in the Grove again? Why?

Yes! The book deservedly won the Pulitzer Prize and it was a riveting listen.

What other book might you compare Devil in the Grove to and why?

No book compares. The story was unbelievable. A combination of true crime and courtroom thriller.

Which character – as performed by Peter Francis James – was your favorite?

Too long for that.

This book deserves to become a classic. It is riveting and proves that truth is stranger than fiction. The story will frighten you, anger you and make you ashamed at the cruel treatment of African Americans by law enforcement personnel.

It's an ugly, necessary read

I almost quit listening to this book. As a white male who grew up in the Deep South, facing the very worst of our Deep Crow history was painful. The book also moves awkwardly in the first few chapters. It was very difficult to follow for a while.

But if we're going to have honest, fair conversations about race in America, it would be good for everyone to remember how bad it once was. Because it was really bad.

Thank God we've moved past the worst of our bigotry. I pray to God we'll overcome the rest of it.

the fight for civil rights

“Devil in the Grove” won the 2013 Pulitzer Prize for non-fiction. Gilbert King did a lot of research to write the story; he goes into painstaking detail about the tactics used by Thurgood Marshall (future Supreme Court Judge) and his co-NAACP attorney Franklin Williams to chip away at the foundations of the Jim Crow Law. He documents in detail the reign of terror conducted in Lake County by the KKK and Sheriff Willis McCall who is portrayed as a ruthless brutal man. The book is about four black men falsely accused of raping Normal Lee Padgett, a 17 year old white woman in Groveland Florida in 1949. King’s research shows that there was no physical evidence and two of the Groveland Four were not even within a day’s drive of the area Padgett claimed the rape took place. Sheriff McCall killed two of the men while in his custody. He was never charged for the shootings. The other two were badly beaten many times but no one was ever charged with the beatings. The KKK burned to the ground the black community in Groveland. King details the complicated case involving 4 defendants, several trials, various appeals, numerous defense attorneys, multiple judges and different points of law. I learned a few pearls from the story 1) more black man were lynched in Florida than any other Southern State and 2) these were the type of cases that evidentially lead to removing the death penalty from rape cases. I was appalled at the treatment of black people by the white in Lake County, if the blacks were the main pickers of the oranges, I just cannot understand why they were beaten and killed. Dead men do not pick oranges. Also it is a disgrace to have Sheriff McCall be re-elected to office for over 20 years. I read this book because I am reading books about the Supreme Court Justices and even though this book takes place before Marshall was appointed to the court I thought it would provide me with an insight into the man, which the book did. Peter Francis James did an excellent job narrating the book.

I'm very glad I listened to this book about racial injustice in Florida in the '50's. The book captured the racist time and place, but also captured the change that was starting to take place in America. It was good legal drama, riveting at times, and an engaging and painful human drama. Thurgood Marshall plays a big role as an NCAA lawyer defending black men of the rape of a white woman. My criticism is that for the first two-thirds of the book, background anecdotes took up more time than the narrative of the case. The strand of the story got lost among those side stories, including the people and the workings of the NCAA. Some background is interesting and important to the context of a story, but tighter editing could have made this a more engaging read and listen. The last third is excellent. As interesting as this is, an even better book is Simple Justice by Richard Kluger. That is about long legal journey leading to Brown v the Board of Education. That book was riveting from start to end.

Having been born in 1952, this book helped me better understand the turmoil of the 1960s. Devil in the Grove was a chilling account of an America that had to change. It read like a real-life "To Kill a Mockingbird."

What did you love best about Devil in the Grove?

This book was great in so many ways, I loved the knowledge that I gained. I am always amazed by these true stories that took place in my lifetime, as they reveal such horrible human behaviors of hatred, blind ignorance and human suffering. I was so moved by this book that I decided to join my local chapter of the NAACP.

Gritty factual history telling the story of the early days of the NAACP and Thurgood Marshall, and a shameful case that America should not forget!

What does Peter Francis James bring to the story that you wouldn’t experience if you just read the book?

His voice was commanding and powerful, and he carried the characters well.

As stated earlier, I was so moved by the power of this story/history, that I joined the local chapter of my NAACP. As a caucasian American, my eyes were opened up even further to a shameful past that resonates today. My previous read along these lines was Nachez Burning, and that too, is an excellent listen.

This is just a fantastic listening experience, I was so fascinated by the true case that I did several additional google searches to learn even more, and Wikipedia has a lot of the factual details. I highly recommend it to my friends.

Not a good narration- returned it.

Definitely READ THE BOOK, just don't try to listen to this audiobook! Haven't heard this narrator before, but he read the book like a press realease, in 4-6 word phrases. That made it very hard to follow either the story or its characters. I finally got the hardcover edition from my local library. It turns out to be a a GREAT READ, along with photos of unfolding events, the key players, and the evidence presented at trial.

Thurgood Marshall is an icon in civil rights history. This is a well-researched telling of one of his landmark cases in the early 1950's.

Terrific story -- Fascinating to the End

This is a terrific story that the author imbues with drama and suspense, despite the fact that we know the likely results from the beginning. I knew little about the details of Thurgood Marshall's legal work before he was appointed to the bench. It's clear from this story that he is a great man and a real American hero, who should be far more widely celebrated.

I like history so I wanted to broaden my background on the fifties and civil rights issues. I knew of Thurgood Marshall's background regarding Brown and his position on the Supreme Court. Groveland opened up a whole new perspective for me. What Marshall had to go through prior to Brown was absolutely amazing. He really was a great man and deserved his position and fame. This was a great story. It kept my interest throughout the entire book.

There are no words. Sad, horrible, despicable come to mind over and over. And then courage, honor, strength. I think this should be on a required reading list for US (white) citizens.