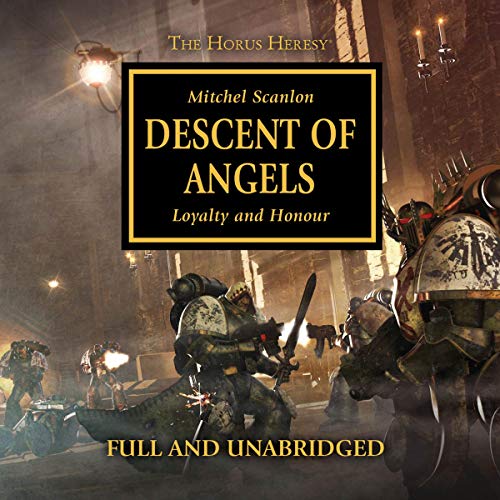 The planet of Caliban exists much as it has for thousands of years - the knightly orders protect the common people, fighting back the beasts that lurk in the depths of the seemingly endless forests.

Young Zahariel and Nemiel aspire to join the greatest of the orders, led by the example of mighty Lion El'Jonson and his vision of a peaceful and unified world. But the coming of the Imperium brings new concerns and a new destiny for the Lion as part of the Great Crusade, and the sons of Caliban must decide if they will follow him to glory among the stars.

What did you love best about Descent of Angels?

I loved getting additional lore and backstory about the Dark Angels.

The story was about the coming of the Emperor and the creation of the First Legion. It has almost no tie in to the actual Horus Heresy. So as a tale about HOW the Dark Angels end up the Dark Angels of the 41st Millennium it's not bad. As a story of the Hersey it fails utterly.

Have you listened to any of Gareth Armstrong’s other performances before? How does this one compare?

I have listened to Gareth Armstrong on several other Black Library books, and he does a very good job telling this story. You always have a feel for who is talking due to the inflection of the character's 'voice' and he is very clear and brings a lot to the tale.

Not really. The story felt kind of disjointed and at times it was hard to tell the passage of time. Some events were told as if they took mere hours or days but took weeks. Other events happened concurrently or behind other events in the book. The story itself could be tighter and better told.

I am glad I have listened to it. I'm not necessarily thrilled with the story itself. But then I'm not the biggest fan of the Dark Angels, so there is that.

Worst in the series up until this point - it feels half finished. The characters’ dialogue is so whiny it’s hardly bearable - and it’s made worse by the narrator’s performance. The story is meandering and feels mostly irrelevant by the end. Actually considering quitting the series due to this one but I think I’ll try the next one hoping that this dud is an outlier.

Great book that im assuming was only written to inroduce the primarch of the first legion the dark angels and give a full backstory. otherwise this book is mostly unrelated to everything that has happened in the rest of the series so far. that being said it was a great book maybe my favorite in the series yet and a needed break from the main storyline, i cant wait to see how they tie this together once the lion enters the war with horus. The one glaring flaw in this book is the abrubt ending, epilogue really wasnt enough either. Narrator was amazing!

The main characters are one dimensional. Story felt rushed and left out good development. It felt more like a really long fan fiction rather than a black library book.

not for me, maybe if more things actually happened, I was not taken in hearing about a boy who would become a space marine.

Great story, however Gareth’s delivery when voicing Zahariel & Nemial is terrible. He kept the same pitch and tone of them from their child & teen years into their adult Astartes years, very cringeworthy & immersion breaking thibking of a full grown Astartes that sounds like my 9 year old nephew, and thats just my take on these 2 characters mind you. Still, Mitchel Scanlon wrote a really good novel & it is worth reading/listening to.

Good but out of place

doesnt have any tie ins to the horus heresy. should be a great crusade or primarch entry

A great story and an easy read. one of my favorite of the series so far!

Why is this part of the Heresy?

I uh.... I don't know how to say this but this title is absolutely boring and I have no idea what convinced GW to include this as part of the Horus Heresy. Part 1: Chapter 1: Here's some scrappy teens. They're friends. Part 3: Chapter 15: They're like, knights now, and still scrappy, and still friends. Part 3: Chapter 8,967,241: And then the Emperor showed up. Part 4: Chapter 1: And now they're Astartes, snd still scrappy, and still friends. Part Missing: And then Horus started some donkey mess and we finally got to the point where all of this had some purpose other than just being a story that went absolutely nowhere.

Narration was great. I feel that this is a good read into the early Dark Angels, but only just gets its legs in the last few chapters, and then sprints to the finish line.

dive into the heritage of the Dark Angeles

A nice mix of Knighthood first in the forest, later in space fighting against evil.

not worth 10 bucks no great battles.

there are no great battles in the Primark didn't do s*** also the voice acting on the emperor was really poor. save yourself some bucks and skip this book