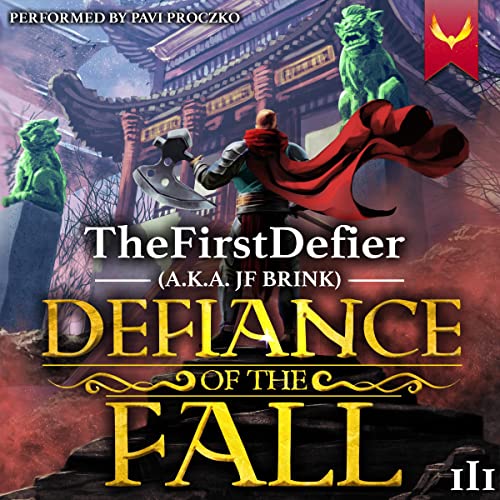 Defiance of the Fall 3

After traversing the dangerous Dead Zone, Zac has finally managed to save his sister and bring her back to Port Atwood.

But Zac knows he can't relax. Not if he wants to keep her safe. The foreign factions keep spreading their influence, and ancient foes have set their sights on Earth.

With his newfound abilities, Zac has joined the Limited Hunt to gain the strength needed to protect his family and his world.

However, the System is unwilling to let Zac train in peace, and the hunt is not what it seems...

Don't miss Book Three of the hit Defiance of the Fall LitRPG series with over 20 ,illion views on Royal Road.

About the series: Jump into a story that merges LitRPG elements with eastern cultivation. Class systems, skill systems, endless choices for progression, it has everything fans of the genre love. Explore a vast universe full of mystery, adventure, danger and even aliens; where even a random passer-by might hold the power of a god. Follow Zac as he struggles to stake out a unique path to power as a mortal in a world full of cultivators.

The characters of Zac is the same as ever. I have no clue why so many "helpful" reviews say otherwise. Just because you wouldn't do something or trust a character doesn't mean it was a bad decision or a change in character. The book has lots going on and lots of interconnected plots and interests.

did some reviewers even read the book?

This series is one of the very few who has a cast of competent, real people who act like people would act if the story was reality. no whiners, no nagging, no idiots succeeding because plot armor. if you're dumb and greedy, like the guy who stole the water bottle, you die. the book makes a point of that.

literally nothing about Zac's character -- or any of the other main characters has changed.

before listening to part 3, I've relistened to book 1&2 back to back. nothing has changed. even with **** (no spoilers) he is still aware, thinking clearly and acting rational and in charge.

where did Zac change when it comes to women? where does he do "whatever women say"?? cause he teamed up with the Marshall clan ranker lady? cause he freed her from being a hostage?
maybe cause she literally saved his life before that??? could that be it? maybe because humanity needs to stick together?

and one line where the author mentions that Zac's would be absolutely ruthless when it comes to defending his family is 'out of character'??? the reviewer then rambles on about WW2 Germany??? non-sequitur much? wonder what the real problem is -- maybe that the author does *not* compare everything happening to real world history or politics and has no agenda except telling an amazing story?


It's quite tough to find good books on audible since you aren't able to sort by anything or search for style or genre. even if you copy paste the title and author audible sometimes acts like the book doesn't exist, but if you buy it on amazon for audible, it's there.

so reviews that completely misrepresent a book are really annoying. and people who click 'helpful' on those just ruin the platform.


the MC is one of the most alpha men in litrpg, which, as a genre unfortunately suffers from whiney brats and fools who need constant deus ex machines to stumble from victory to victory.

so I really dislike reviews that muddy the waters and --for whatever reason or agenda-- try to create the impression that one of the very few series who has a clear thinking intelligent and courageous MC is just the same trash as most.

reviewers disagree naturally on pretty much anything. but people who make up story / character changes or plot points should be banned.

Great third installment in the series. I can’t wait for book 4 to come out!

This book series could easily last another 10 years without getting stale. The way the author structured these books so perfectly to where the main character is building his town, his power, and everything else is at a PERFECT pace to keep you entertained the whole time. This audio series is easily tied for my top two series ever.

Narration was great, could easily tell the characters apart by the voices even before their name was said. Well done!

So it begins, the weakness of all MC

I don't get it why they always start weakening the MC in these books to make them so stupid no matter even if they're OP in power. Zack is starting to get stupid making simple and stupid decisions that you have to just scratch your head and say why, whenever he did something so different in the last book.
I also don't get why he was so afraid to ask for reparations from the Marshal clan after they cause 3 of his people to die. I say Zack in the earlier book was willing to almost kill an entire city for his sister, but letting his own people die. I say what if his sister had been in the battle and die, would he be fine with it or kill all the marshal clan? So, asking for simple reparations isn't much since that's also normal in human world as that happened in WW1 and 2, so yeah.
He also is constantly being rushed around by the people around him rather than focusing on getting stronger. I also don't get why he said he was willing to forgo the tower for instant power up and thinking that's of anything but a waste of time. This man was so calculating in the first book and is getting slower and much more stupid in his decision making that I hope it doesn't continue this way. We will see in book 4 because if it gets worse well, I'm out as I don't want it to turn into the good guy series or something like that.

Edit:
So, I really wish I could hold a true conversation with the reviewer who thought that I was so wrong that he wrote a review about my review. Let's be clear, I did go back and listen to all three like you did back-to-back and yes Zack has changed over the books, I do agree he is one of the most alpha MC in the Lit RPG world, but he's slowly becoming like the rest. He is less calculating, more overconfident and less willing to be a s ruthless as he was in book one whenever he was looking for his family and sister. It's just a fact, and basing Zack's behavior around normal human behavior isn't crazy, it just makes him more relatable. Normal humans need to have a consequence for an action, not just get away with it like the Marshal clan was able to whenever they allow their people to cause three people from Zack's army to die because of them being set up. You didn't answer the question I pose which was what if his sister had been one of the three to die, would Zack kill all the Marshal clan because of the betrayal? If yes, why can't he ask for reparations now?

This was a great addition to the series. This is becoming one of my favorite series. The narrator was excellent at bring the characters to life.

Definitely worth listening to…

This book is a decent listen. The problem I had was that it was too busy, the MC has so much going on that you just want him to do anything except talk about exposition. There has to be like four or five Massive team meetings (exposition chapters) in this book.

Thanks for always coming through for me. I am continually listening to these books and they really are progressive. I enjoy the power system and also him being OP

This felt more like a bridge than a good tale!

I absodamnlutely loved listening to the first two books in this series but book 3 kinda sorta took the wind outta my head long dash to the end.
We find Zac where we left him in bk2 starting the limited hunt for stats and nortoriety and I felt that it was like a rehash of the beginning of the series, with Zac alone against the world, yawn. When the hunt ended and we finally get back to Port Atwood I found that the pacing slowed down to a crawl. There was so much world building and talking, that I actually felt like screaming! But the conclusion was good... So in my opinion this book was only written as a bridge to get us from book2 to book4 and I'm not sure 🤔 that I'll continue to follow Zac's adventures...

Super Brother Man for the Win!!!

Gah i listened to it all and lost sleep, sigh. Book is too good and now the WAIT for the next book. Hope it comes out soon!
Highly recommend and narration is on point! If You liked Cradle then this series is on par if not better!!!

Tis was amazing, would hear again, if I hadnt yet heard it. So I am waiting for the next book, which will be a while, sadly.

Loved the story, the progression, the style and the narrator buuuut *dont read on if you dont understand the title, or you wont be able to unhear it!*

The author uses "extremly" almost exclusivly as an adjective to discribe things. Sometimes its used 5 times in 2 minutes, that word mustve been in the book at least 500 times. If I had the written book id ctrl+f it just to know. Please consider searching for that word in your next book and switch it with something else some times? Love the result of your hard work tho.