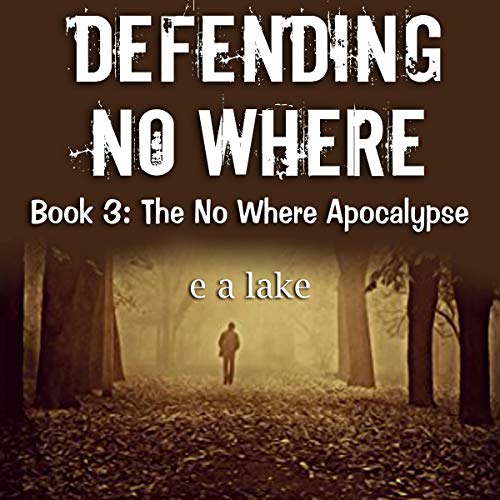 "I will kill that man ,Dizzy. I promise you, I will. Even if it's the last thing I do." (Bob Reiniger, Mourning over the bones of his dead friend)

Bob Reiniger plots and waits, waits and plots. The one thought dominating his days is the revenge of Dizzy's death. And while he's at it, protecting his "family" is a priority.

Clyde Barster made the apocalypse worse when he burned Lettie's house to the ground and killed Bob's best friend. Now Bob must exact his revenge. However, several will try and stop him: a man with a strange device that threatens Libby, a stranger named Carmen, and even his own kin.

Defending No Where is the third book of E A Lake's latest series - The No Where Apocalypse. The action intensifies as Bob gets closer to his ultimate goal...only to discover he was a fool in going after it.

Bob the main character is certainly not the toughest nor smartest dude to actually survive. Seems all the women in this tale want him tho. There are really some dumb choices made for and by all of them in this tale. But still it’s not half bad. Truthfully I’m not sure I’d partner up to live with Bob in an apocalypse tho.