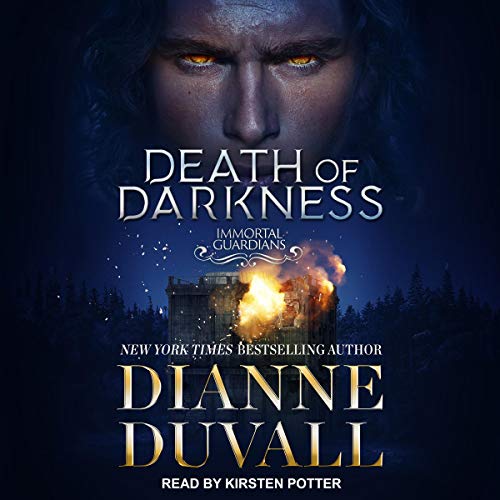 Seth has led the Immortal Guardians for thousands of years. With them fighting by his side, he has protected humans from psychotic vampires, defeated corrupt mercenary armies, defended military bases under attack, and more. But the latest enemy to rise against the Immortal Guardians has proven to be a formidable one, wielding almost as much power as Seth. His goal is simple. He wants to watch the world burn. And he will use every means at his disposal to accomplish it. Seth and his Immortal Guardians have succeeded thus far in staving off Armageddon despite heartbreaking losses. But they have never before faced such danger.

Leah Somerson has suffered losses of her own. It has taken her a long time to rebuild her life and find some semblance of peace. Then one night a tall, dark, powerful immortal with what appears to be the weight of the world on his shoulders stumbles into her shop, and everything changes. Peace and contentment are no longer enough. Now she wants more. She wants to find happiness. She wants to erase the darkness in Seth's eyes and replace it with love and laughter. She knows he's different in ways that make most fear him. Even some of his immortal brethren keep a careful distance. But Leah will not. Nor will she shy away when danger strikes.

How Seth got his Groove Back

I didn’t want to say this but unlike other fans, Seth’s book scared me. What was it going to be like for this father figure who was thousands of years old to find love? What was this man who I even see as the adults of all adults going to be like hearing about him having sex? Well y’all, it only took me about six minutes to figure out that I was an idiot.
Seth and Leah are the ideal couple. I adore her. I adore them dancing together and watching television together. Watching Seth fall in love was addictive. I wanted more and more of it and I was jumping up and down rooting for them by the end I was in tears of happiness.
Now, there were twists and turns that I didn’t see coming. I know that, at one point something happens, and I made a very unladylike noise followed by more unladylike words. There were also times I was jumping up and down screaming with excitement and joy, both on the inside and outside. The only thing I can say is GIVE ME MORE DIANNE DUVALL!
There are questions answered but every one answered has another one to pop up in its place. Every new question makes me want more. Can I bribe her to write faster?

Kirsten Potter is amazing. She allows you to get lost in the story and almost forget she’s the only one performing.

Follow us on FB @audioloversblog for interviews and happy thoughts about books and a great way to discover authors that, hey, you may not discover.

Best of the Immortal Guardians so far!

Dianne does an excellent job at keeping the stories fresh and interesting within this wonderful world she has created. Seth's story is my favorite so far - they really keep getting better and better! I can't wait for the next Immortal Guardian book (and the one after that, and the one after that...)!

Best book of the year!!

Finally after years of waiting Seth finally gets his happy ending. As a long time fan of the immortal guardian series I like everyone else that is fan have been anticipating Seth’s book for years. Seth is the leader of the immortal guardians and the most powerful being on the planet. He also takes the responsibilities of everyone around him on his shoulder. After spending thousands of years morning for the death of his wife and children Seth finally lets himself love again when he meets Leah.
Leah is a strong, independent woman with her own tragedies she has had to over come.

This book had everything in it that I couldn’t wish for. We got to make a lot of new friends and see all of our old favorites. We got to see the resolution have a couple on going storyline and some new questions that need to be answered in the next book. This book made me laugh and cry then laugh again and sob. With all the unexpected twist and turns head head was reeling.

Dianne Duvall and Kristen Potter are an amazing team. And This book is worth more than one credit. Now the only thing I have to do is wait for the next book in the series.

Best book ever! So much happens in this book and what's coming next has me so excited. I can't wait for the next book! Job well done Dianne Duvall!

A good laugh, a good cry, and sexy fun times!

A slow burn but it honestly could not have been written any other way for Seth. He was never going to have insta love and the way their relationship builds is perfection. This book is packed with revelations and holy @%^$ moments. Dianne is a spectacular story teller. You can really tell when a writer has passion for their craft and love for their characters. If you've read any other IG books this one is a must read. It also feels like just the right spot for a bit of a storyline reset. I love that these characters will be with us for a long time to come. I for one can't wait to see the future holds!

This book was amazing I couldn’t stop listening. Loved it. Dianne- you simply out did yourself. Thank you!!!!!

Really liked the story and Kristen Potter is great with voices!
The only thing why it's not a 5 star is that for a 40 something already married and widowed, Lea was Really immature,
She acted and sounded like a 13 year old.
She was funny had good comeback quips but it felt like she was on speeds most of the time.
Really enjoyed the 2 little ones.

One of Dianne’s Best

Riveting! Hold on to your seats IG lovers because this one will blow your mind!

Well worth the wait !

Been a fan of the whole series. Glad for Seth to have his story. Well worth it. Love the ending.

Amazing and full of surprises

Long awaited Seth's story. All I have to say is amazing. It certainly did not disappoint. Dianne Duvall knows how to keep you in suspense and in sensual bliss mode. Kirsten Potter is an exceptional narrator, but I have to say she's outdone herself in the narration of this audiobook.