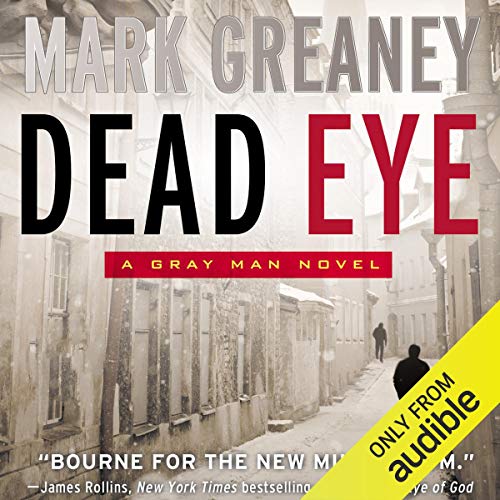 Ex-CIA master assassin Court Gentry has always prided himself on his ability to disappear at will, to fly below the radar and exist in the shadows - to survive as the near-mythical Gray Man. But when he takes revenge upon a former employer who betrayed him, he exposes himself to something he’s never had to face before.

Code-named Dead Eye, Russell Whitlock is a graduate of the same ultra-secret Autonomous Asset Program that trained and once controlled Gentry. But now, Whitlock is a free agent who has been directed to terminate his fellow student of death. He knows how his target thinks, how he moves, and how he kills. And he knows the best way to do the job is to make Gentry run for his life - right up until the moment Dead Eye finally ends it.

I enjoyed the Gray Man series at first, but it has become so formulaic and predictable that I only listened to the first 5 chapters and then the last 2 chapters to see what happened. It was exactly as I thought. As pointed out by a reviewer of one of the Gray Man novels, I was reminded of Monty Python's Search for the Holy Grail when the Black Knight challenged our heroes to a fight. As each of the Black Knight's limbs were chopped off, he laughed and claimed it was only a flesh wound and kept fighting until he was just a round blob. Same goes in each book with the Gray Man. At the end of each he is battered, bruised, shot, stabbed, frozen and pounded. With bits and pieces of him scattered all over the country, he manages in the end to keep fighting - and we still don't get any answers or closure. I cannot endure another book in this series. I will leave it to the rest of his fans. Be sure you have plenty of bandages , splints, pain killers, antibiotics and blankets ready to patch him up and bring him back to health.

Fits well into the series

I was hooked on the Grey man novels right from the second one. I mean I have read On Target first, actually. Then, of course I went back to read the first one.
The figure of the Grey Man is compelling. When I was thinking about him I realized that I like a professional assassin, a serial killer, who makes hits for money. But there is something about him what makes us, readers to stand on his side. It's maybe that he kills only bad guys, which speaks about certain principles he possesses. It's maybe that he is mysterious, always slipping out of the hands of his pursuers.
This book brings an interesting plot into play. Dead Eye is almost like the Grey Man: though, well trained, merciless killing machine. But there is a big difference: he doesn't share the same principles. When he lays out his own scheme, he draws the Grey Man into a dubious game. An assassin always is in danger, the Gray Man's life isn't different, half of the governments are after him for one reason or the other. Mostly killing somebody important. But now his troubles are augmented having Dead Eye playing games with him.
I liked the dynamics of the story. Dead Eye tried to go trough his airtight plan, but it is not by chance that the Gray Man is considered to be the best assassin. He changed the game, and Dead Eye had to adjust.
In this book we learn a few things from the past of the Gray Man, which adds some puzzle pieces to the his picture.
I especially enjoyed that the final battle was played out in Belgium. I live in Overijse, where the safe-house was, I go to work on route N4 every day, and I'm familiar with Uccle and Etterbeek. It was fun to see the story to unfold in these places.
After the fourth installment, Court Gentry is still one of my favorites, right next to Jack Reacher.

OK, but only because I was halfway through when I realized the detail and use of superhuman characteristics of the main characters began to swamp the plot. I decided to tough if out.

Ok, but in keeping with the author's propensity to salvage situations with all-too-frequent literary legerdemain.

Not as good as others for the genre.

No, because it already stretches the art of the possible for the human characters and Hollywood would make this worse.

Author uses excessive attribution of super humanity to the main characters and far too imaginative technological capabilities to agencies. It was like listening to a comic book and I out-grew them long ago.

Where does Dead Eye rank among all the audiobooks you’ve listened to so far?

This is a really good action suspense novel. I rate it right up there with some of my favorites ie: Reacher, Pendergast, Davenport and Cage.

Yes. Court Gentry can't keep out of danger! The Gray Man books move right along and I usually listen to them in one to two days.

What does Jay Snyder bring to the story that you wouldn’t experience if you just read the book?

Jay Snyder is The Gray Man! After 4 books I don't think it would sound right if read by anyone else.

The end. When Court "comes home". That's been a running theme through out all of the Gray Man books.

How do you stay alive when your enemy has the same lethal skills as you do? Mark Greaney has developed a complex story populated with equally complex characters The pace is rapid with so many unexpected plot twists the reader is constantly re-evaluating who, if anyone, is a good guy. While reading this book, I was unaware that it is the fourth book in the series. It is a gripping page turner.It can be read as a stand alone story, but I will, now read the preceding novels to find out what else the Gray Man has had to endure to ensure his survival.

Not good, not terrible.

Very mediocre. I finished it without too much trouble but nothing to make me want to recommend it to anybody.

A great addition to the Gray Man Series

Dead Eye was a bit slower than some of the other Gray Man novels. Yes it’s still got a lot of action in the start and the end but it gets a bit slow middle as the story develops. If you’ve read the other novels in the series then you know what waits in store for you (action, static characters and plots which are a bit predictable but still fun) so if you like them you’ll like this one as well. It’s a fun addition to the Gray Man story and sets up an interesting path for the next book.

As always Jay Snyder does a great job with the narration bringing to life the various characters along with good pacing.

Mark Greaney: A master of the espionage thriller!

With Back Blast, the fifth novel in the Gray Man series, being scheduled for release in February 2016, I note that I have not written reviews of any of the prior four Gray Man novels. (Back Blast is not yet available for pre-order at Audible.) The Gray Man is Court Gentry. He was the top CIA assassin until the agency turned on him and ordered him killed. The task has proved more difficult than the CIA expected as Gentry is a very difficult man to find as he takes on assassination assignments from others as he evades the CIA. All four Gray Man novels have been outstanding and narration by Jay Snyder has been superb.

Mark Greaney has peers at the top of the espionage thriller genre, but none are better than he. After his first three Gray Man novels Greaney began co-writing novels in the Jack Ryan series with Tom Clancy. He co-wrote Locked On, Threat Vector, and Command Authority prior to Clancy's death. It soon became obvious that Greaney is a better writer than Clancy himself. Greaney has continued the Jack Ryan series (now more about Jack Ryan Jr. than the senior Ryan) with Support and Defend, Full Force and Effect, and on December 1, 2015 Commander in Chief. The three since Clancy's death still carry the Tom Clancy name and Scott Brick, one of the master narrators of audiobooks, continues to narrate Greeney's Clancy novels.

I HIGHLY RECOMMEND all of Mark Greaney's books and I enthusiastically look forward to release of Commander in Chief on December 1, 2015 and to Back Blast on February 16, 2016.

Don't let this be the last Gray Man Book!

Would you consider the audio edition of Dead Eye to be better than the print version?

Yes! Jay Snyder is so incredible! He captures every accent, every emotion, male, female, etc. You always know whos talking and can feel the excitement!

What was one of the most memorable moments of Dead Eye?

There were so many. The scene on the lake had me gripping my seat!

EVERYTHING! He didn't miss a beat as usual.

I did laugh, no crying but it did make my heart race a more then once.

This series is exceptional! I seriously hope there is more to come.

A whiz-bang, non-stop caper with multiple angles of pursuit. The Gray man appears to have met his match and maybe had too much of a peek into his creation this time out. This time around Gentry is getting tired and manhunt technology is evolving faster than his skills of evasion, but he is the Gray Man and he is the best.
I'll not going to nit-pic this fine novel of intrigue and sometimes over-the-top brutality. It is superb escapist writing and I'm all for that!