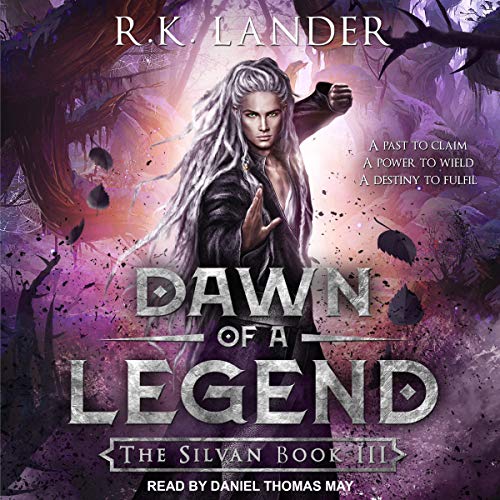 Dawn of a Legend

A half-blood bastard to the enemy. A crownless warrior prince to the Silvans. Fel'annár must face the ultimate warrior on the field of battle or condemn his lands to civil war.

Returning from battle in the mountains, a death triggers a mystery Fel'annár and his company of chosen brothers must unravel. But why do the trees speak of a beautiful monster?

Fel'annár will learn the ways of the Kah Warrior from a legendary commander, while facing the disdain of another who struggles to accept this "ignoble son" for who he is, not for what he represents. Meanwhile, Fel'annár's half-brother reveals a plan to restore the Great Forest to its past splendor of multi-cultural harmony.

But the forest is falling apart under the final onslaught of a ruthless traitor. Can Fel'annár and The Company come to understand what role they must play in the restoration before it's too late? Can the brothers put aside their resentment toward each other and learn to trust one another? Can love prosper in the midst of battle and hardship as dark enemies converge on the motherland?

Danger lies in wait for an elf who is slowly coming to terms with his heritage, learning to wield a natural ability, and accepting the nature of his unfolding destiny. But one elf and an army will stop at nothing to avoid his return.

A good book, well narrated! I can't wait for the next installment! I hope it will be soon available

This is a must read for any fantasy novel fans

If you like Tolkien, R Jordan, and George RR Martin than you will love this book. Like all the other great fantasy writers RK Lander creates a imaginative world, with great character build-up, a hero that you find yourself sincerely rooting for, a great cast of side-kicks and many very satisfying character arcs. There is heart-ache and resolution, funny bits, parts that even made me cry. I would recommend this series to anyone who appreciates good fantasy fiction. I would also strongly recommend the audio version, the voice actor did an exemplary job with these books.

Epic battle, intrigue.. this book has it all.. Quickly became one of my favorite book series..

Trust Me when I say you'll wanna read this till the end, the read is worth it. Enough said.

The book is gripping. I finished in two days. I hope there is more to come.

Wonderful continuation of a great series

Dawn of a Legend is the third, and - in my opinion - the best book in this series so far. Each character has depth and potential for growth, which many of them do. R.K.'s descriptive style allows me to visualize every scene as if I were there, and the visual details only serve to enhance the story rather than distracting from it.

In this book, the political machinations and intrigue continue, while a new enemy is introduced. The mystery around the nature and identity of that enemy escalates continuously until the epic battle towards the end. I thoroughly enjoyed watching Fel'annar's continued evolution as a warrior, and was thrilled by the addition of the internal martial arts. I haven't found that as much as the external marital arts in the fantasy and UF genres (maybe I'm reading the wrong books?), but as a practitioner, I love its role in this story.

Perhaps more important are the emotional changes that several characters go through. It's almost a given that Fel'annar, as the young, main protagonist, would experience more emotional growth, but I especially enjoyed how much some of the older characters are changed as well. I found myself tearing up during some of the scenes, laughing out loud at others (The Company never fails to entertain!), and reading with bated breath during and after the final battle. It was hard to put the book down.

This series may have a fantasy setting, and yet many of the key concepts that drive the story are rooted in reality: Loyalty, family, equality, and love. I think that is why this series is so engaging, and I look forward to the next book!

Mr. May's performance has improved over the course of the series. Female voices are not as dissonant as they had been in the 1st book, and I've always liked the male voices and overall cadence and intonation. I am listening to this book for the 3rd time now.

what a great book and series

I have enjoyed this series from book 1 all the way to this one. the author has a way of getting the emotions that the characters are feeling from the pages to our own hearts. been a while since I read a book that had me on the edge of my seat during the battles and cursing "all the dust" that gets in my eyes in other parts. truly well done Mr. Lander. Daniel do not think I have forgotten you, the performance that you have given adds so much to the words written. I tip my hat to the work you put into the narration for all three books. well done.

Another amazing book in an incredible series

I will state my only issues I had with the last 2 audible books in the series was the female voices. I believe that there has been significant improvements in the voicing of the female characters in this book and hope to see additional improvements in book 4!

Wonderful.nthe storyline is awesome. Excellent plot with court intrigues, magic and romance and superb heroes. A truly likeable hero who is genuine in helping people in need. Brilliant writer and the story flow smoothly throughout with excellent performance by Danial Thomas May. I hope book 4 will come out soon. Very engrossing story which kept me awake all night listening. Thank you Audible for publishing this fantastic series.

i thought this to be the best of the series so far. i was facinated and riveted. excelent!!

loved the rich descriptions and fully developed characters the plots and subplots. every line and was rich and passionate