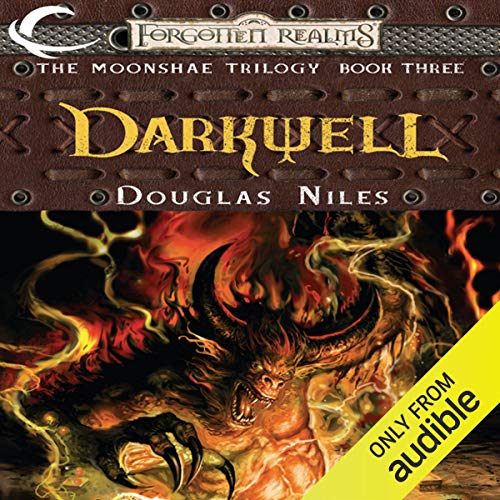 The final title from the first Forgotten Realms trilogy ever published, now in audio!

Published in 1989, Darkwell was the final novel in the first trilogy ever set in the Forgotten Realms world. Unavailable for the past several years, this title is now being brought back in an audiobook edition. The other two titles in this trilogy will also be rereleased in the same season so that readers may easily compile the entire trilogy.

amazing books. the editing could use work in the audio though. sometimes the voice will change completely for a second.

Although the narration was clear the pronunciation of curtain words were way off. The choppy reading was irritating and the voice itself graded on my nerves. Then there's the fact that the voice seemed to be cut in a multitude of places as though rerecorded.

I loved this book when it first came out, so I purchased the trilogy on Audible. That was a huge waste of money. It's the third book, and the narrator is still saying Fuh-folk when 5 seconds on the internet will tell you Ffolk is pronounced Folk. Total waste of money!

Great Ending To This Series

All questions were answered and everything was pulled together for a great ending to a fun series. I highly recommend.