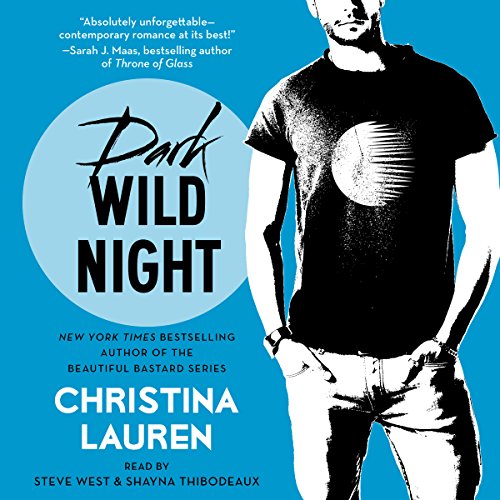 I looked forward to this so much, and it just fell short for me. It was like a filler to the series and could have been so much more.

Christina Lauren delivered another winner! Lola and Oliver were not on my radar as a couple I'd be interested in learning more about, but, in true CL fashion they've created characters that you can't help but delight in, as they figure out their HEA.

Dark Wild Night was pretty close to perfection, and a close runner up to the Beautiful series in terms of sexiness, humor, and overall awesomeness! I didn't want this one to end. I can't wait for the next Christina Lauren book; until then, this a 'listen and repeat' for sure. Highly recommended!

No, I think I would recommend it was read. The male narration is pretty average. The story itself is good, not my fav from these authors, but still okay. I didn't feel as connected to their story. The conflict/issues felt like a tiny blip in the road rather than much to overcome, which felt a bit of a let down. However, the way that Lola lives in her head is really well done, and could feel the tension. I was getting agitated listening to her stress out, which I guess, is a good thing.

What was one of the most memorable moments of Dark Wild Night?

When Lola drew him. That was, well, pretty memorable. *fans self*

Having an actual Aussie do the male narration would have been better. The accent wasn't unbearable though. However, his depiction of Lola speaking was just awful. The female narration was spot on as usual

Once you give it all, you really shouldn't take it back.

I liked it. I think it'd be a better read than listen on this one, but certainly still worth having in your library. I don't know if this is the end of the series, I'm kinda hoping there will be an epilogue at least that will deal with Not Joe and tell some of his back story.

Great story. Like all of the Christina Lauren books Dark Wild Nights is funny, witty and hot. The Christina Lauren duo can actually write, too few romance writers can truly write well. Shayna Thibodeaux is a great narrator and her performance delivers all wit, humor and depth of the character's thoughts. I could forgive Steve West for not delivering an Austrailain accent, seeing as Oliver is Australian, but he makes female characters sound like nit wits, and Lola is far, far from a nit wit. It really kills the over all narration.

Goos but a little irritating

This was a good listen but nothing like the previous one.
Lola and Oliver love and friendship is cute but annoying.
They keep their distance and deny their love and relation for way too long...
Bored me.

I wasn't expecting very much after not really liking the last book in this series, but this book was rad. I liked it a lot! The only thing I didn't like was that the male narrator sounded like John Malkovich when he tried to do a woman's voice.

Did not love it

This could have been a novella. It was written well but thought the focus was not as clean as it could have been. It was too intense. Their feelings were over the top/all over and did not match their actions. Conflicted on how I feel about this one.

Least favorite of this series

The will they or won't they is always necessary, but holy smokes, it goes on for 3.5 hours, and their story just isn't interesting enough to pull that off. I also felt like this Lola was so spineless compared to the Lola in the other novels. The Beautiful series is so much better!

Not as good as I expected

Sometimes audiobooks make books better, other times not so much… This was the case of Dark Wild Night’s audio.

There were two narrators: Shayna Thibodeaux and Steve West, which was expected as this book has dual POV. Shayna did an great work in her performance. Her voice matches Lola’s personality and her secondary character’s inflections were very accurate. I loved listening to when Lola was all excited about her career and her relationship with Oliver. Also as the moments when she was doubting herself, Shayna transmitted Lola’s anxiety very well.

On the other hand, there was Steve. He was my problem in this audio. He is a great narrator, I’ve listened to him in other books, like Chasing River (read my review here) and I totally loved it. One of the things I like the most about him is his accent, and his ability to differentiate other characters’ personalities just with his voice. But none of that happened in this audio. He didn’t match Oliver’s personality, or his passion and love for Lola, and much less other characters’. Shayna did a better voice for Oliver than Steve did.

I still love the book, #Loliver’s story is amazing. But this audiobook didn’t do it for me.

It was a great story line but really to the ending i wish it was more too it.