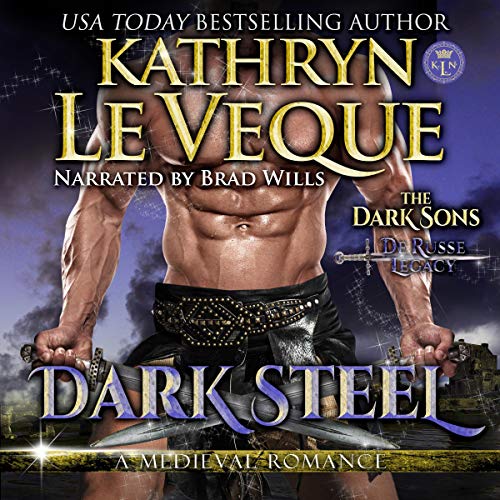 It's 1512 - Dane Stoneley de Russe is a hardcore knight, bred for battle. His father, Gaston de Russe, is called the Dark One, a knight so deadly and legendary that he is more myth than man.

Dane has a lot to live up to.

In a nasty battle on the Welsh marches, Dane is forced to make a bargain with the dying duke of Shrewsbury. On his deathbed, he rewards Dane with his only child, his heiress. Now, it is Dane who will inherit the dukedom of Shrewsbury and become a powerful man in his own right.

It is a gift any man would be glad to accept, and Dane is no exception. Except for the marriage part. Focused on the dukedom he will inherit, he gives little thought to the means by which he will acquire it, and only on his wedding day does he catch a glimpse of his bride, the Lady Grier de Lara, for the first time.

Then, the situation changes markedly.

Grier is a lovely young woman, raised in a Welsh convent when her mother died, far removed from her father and his English legacy. Thrust into a marriage she didn't want, she is nonetheless intrigued with her new husband, handsome Dane. As Dane and Grier come to know one another, feelings develop that neither one of them can admit. When rumors of a Welsh uprising against Shrewsbury began to circulate, it is Grier who decides to involve herself where she doesn’t belong - in her husband’s war plans.

Enter a great world of medieval pageantry and battles, where love crosses lines and battlefields, and where betrayal is inevitable as two countries remain at odds. Can Dane and Grier overcome the prejudices they’ve always been taught in order to love their enemy?

Dark Steel is the romance of a lifetime!

The De Russe Legacy series are all stand-alone novels, but the chronological order by the date the story is set is:

This help to tie up loose ends of character relationships. I will listen to it again it is very interesting and amusing dialogue at times.

Great story about Dane and Grier. I have wanted to see what happened to Trenton and Dane since I read The Dark One: The Dark Knight. These two that swore off women when they were just lads. As always Brad Wills does an excellent job of portraying KLV’s characters.

I would Recommend this book to any Anyone who loves Katherine LeVeq. This is one of her finest.

Kathryn le Veque writes with passion and expressive scenes. They are in such detail I can see them in my own eyes. Dane was such a lost soul when he was taken in and raised as a de Russe. Brad Wills is a perfect narrator for her funny, exciting and passionate stories. He can bring each character to life and I know each one with his voice. Perfect combination!

Dane, surprised by the betrayal his Father had brokered with his good friend, the Duke of Shrewsbury founds N unexpected peace and fulfilment in his unwanted marriage to Greer. She in return felt blessed and enamored with her fierce and powerful husband. Filled with unexpected ups and downs, the audiobook keeps you glued to your seat with the help of the 5 Star, very gifted narrator, Brad Wills! 💗