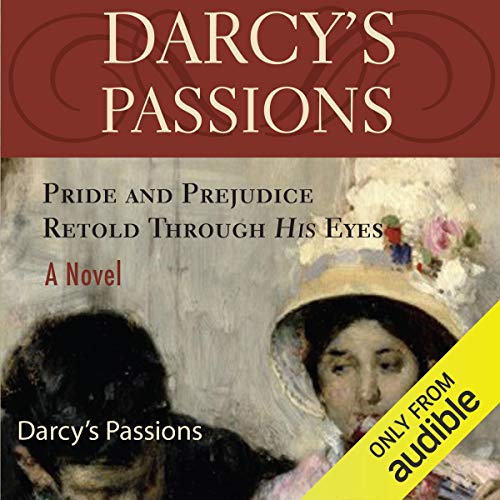 When Fitzwilliam Darcy comes to Hertfordshire as a service to his best friend Charles Bingley, who has recently let the Netherfield Park estate, Darcy assumes the locals will possess "vulgar" country manners. So, when the opportunity arises, he refuses to dance with Elizabeth Bennet at the Meryton Assembly; however, from that moment, the woman's charms possess his every waking and sleeping minute. Obsessed with Elizabeth Bennet, Darcy places himself in a position to learn more about her while realizing his social status will not allow him to marry her. He manipulates Bingley and others in order to spend time with her. He tells himself Elizabeth Bennet is simply a "diversion" from the lack of society he finds in Hertfordshire.

However, if she is only a diversion, then why does he dream of her as mistress of his estate? Why does he seek her out as a friend for his shy, withdrawn sister? Why does he allow her to speak to him with a saucy attitude? Why can he not even breathe when she is in the room? Why does a raise of her eyebrow or an enigmatic smile or the smell of the lavender she wears create havoc with his emotions? His duty to his family and his estate demand he choose a woman of refined tastes. Yet, what his mind tells him he wants and what Darcy's heart knows he needs are two different things.

Darcy is a man in turmoil. He loves a woman he first denies as being worthy, but it is he who is found wanting when Elizabeth Bennet refuses his proposal of marriage because he does not conform to her standards of a "gentleman." Devastated, he must transform himself into the man she learns to love and respect.

Darcy addicts: this one's for you

Where does Darcy's Passions rank among all the audiobooks you’ve listened to so far?

Top 5, but only because I love Mr. Darcy, and this story is all about him. I alternate between this one and P&P constantly.

What was one of the most memorable moments of Darcy's Passions?

When he first realizes that he can't live without Elizabeth.

Would you listen to another book narrated by Andy Cresswell and Penny Scott-Andrews ?

Nope. Andy Cresswell was very non-exciting. Penny Scott-Andrews sounded like a robotic child. I'd LOVE to hear Colin Firth, as he is the ONLY Darcy.

This book is for the die-hard Darcy fans. It has its faults, as other reviewers have pointed out. Jane Austen didn't write it, so that explains a lot. But if you love the character of Fitzwilliam Darcy, and you need more of him, this book is for you. It is definately a look into his mind. There are some liberties taken with the story, but they don't bother me at all.

Parents: it isn't R-rated by any means, but it has a few mentions of their love life. I think it's tastefully done.

What made the experience of listening to Darcy's Passions the most enjoyable?

I enjoyed the author's research into major works of Jane Austen's novel from written word, TV and Cinema. Regina Jeffers took care in telling the story from a masculine point of view. One that is a fitting companion to Austen and the telling character of Darcy portrayed first by Colin Firth in the BBC adaptation and Matthew Macfadyen's 2005 movie version for which she took care.

I often felt that Matthew's Mr. Darcy was so real and the acting of his inner turmoil entirely encompassing in his acting talents that are so acute, that to the point of a viewer; the subtly of the depth of the character portrayal could nearly be missed in a blink. I found it brilliant and have often gone back frame by frame to drink in each arch of a brow and nearly misperceived smirk, glance and adored admiration. Once you realize what you have as a viewer in front of you watching again and again is it's own guilty pleasure.

This book carries forward where we are left off to wonder. I did enjoy it.

What other book might you compare Darcy's Passions to and why?

Of the style of character development I would say, Persuasion comes close to the dynamics of the pair from Austen. However, I did find this work a harder read in flow and character differential.

What about Andy Cresswell and Penny Scott-Andrews ’s performance did you like?

The narrator's kept it lively and the voices varied enough as to not get confused as to who was speaking.

The book did a good job in making me flush and blush as the characters did the telling of the passion had just enough heat that one tends to ache for such a depth of feeling in their own lives. It was well developed next step into the lives of this most unusual couple of the times.

Letting the mind wander through thoughts of devotion, love, misunderstanding of these characters a person can see where their own lives could be foiled by a similar circumstance in these modern times. I will be picking this book up again.

I liked the storyline overall and it was interesting to examine what may have been going on in Darcy's mind during the events of Pride & Prejudice. However, in my opinion, the author didn't quite capture the true spirit of either main character, especially in the parts leading up to and following the wedding. The writing is a little too saccharine and cheesy to believe it would be coming from Elizabeth and Darcy, even though they were madly in love. That being said, it was enjoyable, and I'd recommend it for anyone who enjoys P & P adaptations.

I can't wait to replay it.

Positively loved this expand view of this wonderful story! I can't wait to replay it.

Andy Cresswell's narration, especially the voice of Darcy, was excellent. His voice for Darcy reminded me of Matthew Macfadden's in the movie version of Pride and Prejudice. However, Penny Scott-Andrews' narration was very disappointing. All the female voices seemed to lack emotion especially Elizabeth. They also did not sound very feminine and I longed for Elizabeth to sound more like Keira Knightly or Jennifer Ehle. The story was well done and I enjoyed seeing things from Darcy's point of view. Mr. Cresswell's narration saved the book for me.

I loved the narrator Andy Cresswell, he made an excellent voice of Darcy. I enjoyed the liberties taken with the story, exploring Darcy's innet thoughts and then extending the story past the wedding and showing some of Darcy and Elizabeth's marital bliss.

Good story but the narration is disturbing...

The narrator's voice drove me crazy. I'm sure if Colin Firth read this book, it would be wonderful!!! But he didn't and the terrible voice made me quit the book once for several weeks before going back to it...

I'm glad I did, as the story became more interesting and the last several chapters were sweet peeks into the Darcys' lives after the wedding...

I have bought the audiobook version of this sequel because it's a nicely paced book for listening to while I drive, cook and clean... I am looking forward to it!!

i love this version of the Pride and Prejudice story. Darcy and Elizabeth's story as told from Darcy's side is brilliant.

Sometimes the story seemed to drag on and on. . .
The women’s voices sounded like men.
The man’s voice was fine.

The first and middle were excellent....

Five stars for the first and the middle!!! I honestly loved hearing Darcy's perspective and felt that the author stayed authentic and did great!...but when I thought it was about over and wrapping up nicely... I look down and there was FIVE HOURS OF LISTENING LEFT😳. It started to drag at the end with them rehashing all their mistakes and "oh elizabeth oh Darcy." over and over and over. She drags out their planning of the wedding and arrangements and then poor Jane Austen would roll over in her grave I believe because she slowly starts slipping in how they desire each other and must wait etc ...but puts in like the touching of his thigh and that he's aroused😳🤢yuck.....she describes it more than Austen would have ever dreamed in my opinion!😳🤢 Thank goodness it didn't get worse than that but definitely pg 13 and more than Austen would have ever written that's for sure 😳 ....then they continue to talk about how they loooong to be together"like that" and she has Elizabeth giggle about it all the time...and it just ruined the whole book for me 😭. The whole first and middle on to this last five hours it was as close to authentic Austen as I've read so I was super bummed. The last four hours were spent in their honey moon phase...ugh.. and yes she fades to black but it's c o n s t a n t l y. Cringe worthy for true Austen fans...I get it, they are in love.... but soooo not fitting for Austen. Yuck. She did throw in a few things with the different characters... future plot possibilities and announcements... and what she felt is their future stories which was fun in those last five hours so I kept pushing through but I was honestly relieved when it ended. Pride and Prejudice will always be a favorite and reading the first 3/4 of this book was definitely worth it. I can't imagine taking on Jane Austen!!!