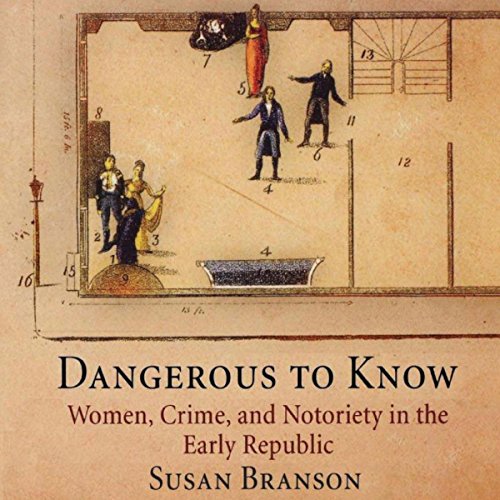 In 1823, the History of the Celebrated Mrs. Ann Carson rattled Philadelphia society and became one of the most scandalous, and popular, memoirs of the age. This tale of a woman who tried to rescue her lover from the gallows and attempted to kidnap the governor of Pennsylvania tantalized its audience with illicit love, betrayal, and murder.

Carson's ghostwriter, Mary Clarke, was no less daring. Clarke pursued dangerous associations and wrote scandalous exposés based on her own and others' experiences. She immersed herself in the world of criminals and disreputable actors, using her acquaintance with this demimonde to shape a career as a sensationalist writer.

In Dangerous to Know, Susan Branson follows the fascinating lives of Ann Carson and Mary Clarke, offering an engaging study of gender and class in the early 19th century. According to Branson, episodes in both women's lives illustrate their struggles within a society that constrained women's activities and ambitions. She argues that both women simultaneously tried to conform to and manipulate the dominant sexual, economic, and social ideologies of the time. In their own lives and through their writing, the pair challenged conventions prescribed by these ideologies to further their own ends and redefine what was possible for women in early American public life.

You owe it to yourself to read this one

This was originally a major thesis or a Publish or Perish piece. That does not diminish its relevance. While it is a biographical piece of two specific women in the Philadelphia, PA area in the early to mid 19th century, it is also a condemnation of the societal attitudes toward women at that time, and the injustices perpetrated upon them by the legal system.
Much of the (well documented) information is taken from "The history of the celebrated Mrs. Ann Carson, widow of the late unfortunate Lieutenant Richard Smyth : with a circumstantial account of her conspiracy against the late governor of Pennsylvania, Simon Snyder, and of her sufferings in the several prisons in that state : interspersed with anecdotes of characters now living" (1822), a text listed in WorldCat, which was co-written by the other woman of interest, Mrs Mary Clarke, ghostwriter of said book, as well as a publisher and journalist in her own right.
Each woman was victimized by society and the legal system, one turning to real criminal activities, the other trying to live more or less within the law. The publisher's blurb gives some useful clues, but this really needs to be read to truly appreciate what serious and appalling discrimination was perpetrated upon females in this time period.
This turned out to be a really compelling read for nearly anyone, whether a history buff, law enforcement, or legal studies, and the references do check out.
I'm prejudiced toward the audio rendering, partly because of physical issues, and mostly because Sally Martin is such an excellent narrator of academic works.

This audiobook was given by the author, narrator, or publisher at no cost in exchange for an unbiased review via Audiobook Boom.

Female Criminals in the 1800s

Would you consider the audio edition of Dangerous to Know to be better than the print version?

Some audio versions helps me picture in my mind the goings on while I listen. That's a good thing.

What was one of the most memorable moments of Dangerous to Know?

How differently women were treated then vs now. The usual differences.

Have you listened to any of Sally Martin’s other performances before? How does this one compare?

Sally Martin is a narrator that I have heard before, and would not hesitate to listen to again. Good narrator.

I was voluntarily provided this review copy via Audiobook Boom at no charge by the author, publisher and/or narrator.

Ann Carson and Mary Clark. Two woman hi began breaking gender barriers in the 1800's...adultery, scandal, murder most foul, attempted kidnappings, counterfeiting rings, theft and more. Ann Carson is revealed in all her infamy and Mary Clark is shown in the light of her accomplishments in relation to Ann Carson. Fascinating story well laid out. The narrator does a good job conveying the tale. I received this audiobook from the author narrator or publisher for free via audiobookboom in exchange for an unbiased review

It gave insight on the injustices women faced during that time and how the legal system responded.

I was provided this audiobook at no charge by the narrator in exchange for an unbiased review via Audiobook Boom.

This is a good book on stories of criminal women in PA in the 1800's. Quite interesting on how the women were treated by others and the legal system. The narrator did a good job narrating the book.
This audiobook was given by the author, narrator, or publisher at no cost in exchange for an unbiased review via Audiobook Boom.

Interesting, but not terribly engrossing.

Looking at two characters from the early 19th century US, Branson tries to convince us of the significance of these women's actions and decisions, but mostly ends up painting a picture of two semi-incompetent rogues - one with no fear and a persecution complex, the other trying first to run her lady's journal with blunt application of guilt/pity, then by using more pandering and sensationalism to sell her writings. The characters are indeed interesting, but to me their notoriety comes mostly from their audacity while being middle class women.

The writing is good, but the structure of the book is a bit strange: quite academic in form, which leads to a certain degree of repetitiveness. I believe the narrator had a difficult task due to the structure and nature of the material. She’s clear and easy to understand, but also quite dry with little variation. There were even a few humorous mispronunciations, which I found surprising.

Overall, an interesting and coherent work whose academic credentials I can’t question, but one that I would be reluctant to recommend to anyone who does not have a deep interest in either the locations or the people covered in the book.

I was provided this audiobook at no charge by the narrator in exchange for an unbiased review via Audiobook Boom.

“This audiobook was given by the author, narrator, or publisher at no cost in exchange for an unbiased review via Audiobook Boom.”


The story of women's criminal exploits in history. Quite enlightening for modern day listeners.


The narration was well done.