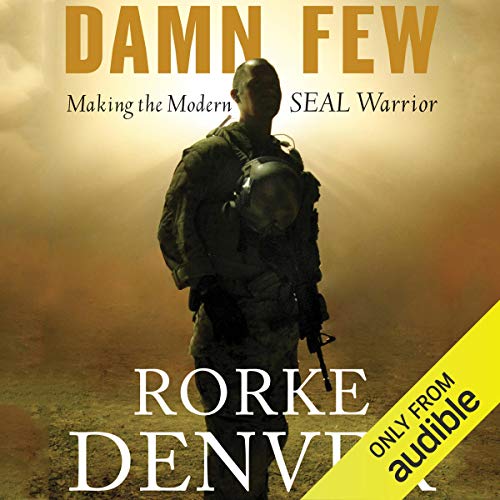 Rorke Denver trains the men who become Navy SEALs - the most creative problem solvers on the modern battlefield, ideal warriors for the kinds of wars America is fighting now. With his years of action-packed mission experience and a top training role, Lieutenant Commander Denver understands exactly how tomorrow’s soldiers are recruited, sculpted, motivated, and deployed.

Now, Denver takes you inside his personal story and the fascinating, demanding SEAL training program he now oversees. He recounts his experience evolving from a young SEAL hopeful pushing his way through Hell Week, into a warrior engaging in dangerous stealth missions across the globe, and finally into a lieutenant commander directing the indoctrination, requalification programs, and the “Hero or Zero” missions his SEALs undertake.

From his own SEAL training and missions overseas, Denver details how the SEALs’ creative operations became front and center in America’s War on Terror - and how they are altering warfare everywhere. In fourteen years as a SEAL officer, Rorke Denver tangled with drug lords in Latin America, stood up to violent mobs in Liberia, and battled terrorists in Iraq and Afghanistan. Leading 200 commando missions, he earned the Bronze Star with V for valor. He has also served as flag aide to the admiral in charge and spent the past four years as executive officer of the Navy Special Warfare Center’s Advanced Training Command in Coronado, California, directing all phases of the basic and advanced training that prepare men for war in SEAL teams. He recently starred in the film Act of Valor. He is married and has two daughters.

Ellis Henican is a columnist at Newsday and an on-air commentator at the Fox News Channel. He has written two recent New York Times best sellers, Home Team with New Orleans Saints coach Sean Payton and In the Blink of an Eye with NASCAR legend Michael Waltrip.

With all the SEALs’ recent successes, we have been getting a level of acclaim we’re not used to. But something important has been missing in this warm burst of publicity.... Correcting that is my mission here.

My own SEAL dream was launched by a book. My hope is that this one teaches lessons that go far beyond the battlefield, inspiring a fresh generation of warriors to carry on that dream.

When he was in BUD/S & when he dealt with the bullies in elementary school.

What aspect of Rorke Denver’s performance would you have changed?

He's a pit dead pan and would have liked to have seen more of his personality come through. The story might have been served better by a professional reader like Ray Porter. Loved his narration of Howard Wasdin's & Kevin Mitnick's books.

The BUD/S hallucinations made me laugh.

Great start, but had to force myself to finish it.

Enjoyable read for the most part, but the last few chapters could've been deleted. Forced myself to finish it the way parents force kids to finish a bad meal. Found myself rolling my eyes after the 100th time I heard how superior seals are to everyone in the world, including other branches of the military. Perhaps the Navy ought to start serving up some humble pie. It's one thing to let me come to that conclusion myself, which I may have, but it's another to just say it over and over and over again. Speaking of repeating the same thing over & over, the editing job was poor. At least half a dozen times the same sentence was repeated during narration. And it was abundantly obvious where a piecemeal voice over edit occurred. Was excited to read this, but it just left me feeling annoyed.

Would you listen to Damn Few again? Why?

I've listened three times already. The anecdotes are awesome, the recounts of operations and the SEAL mindset are inspiring. Rorke's account would give any person thinking of becoming a Navy SEAL some good food for thought.

What was one of the most memorable moments of Damn Few?

His recollection of SEAL training tells just enough of what it take to become a SEAL without revealing anything sensitive to national security.

Which character – as performed by Rorke Denver – was your favorite?

It's already been done... Act of Valor seems already a good representation as Rorke advised and incorporated some elements of his actual experience into the film in which he performs as a SEAL.

this blew me away. lately i've been on a spy-novel book kick, and somehow i saw "damn few". wow. just wow. If i had to guess what the very best US warriors went through to be trained, and what they did in combat, this book spells it out and makes it real.
i cannot relate, but i am thankful.

this author is, dare i say, a true american. he's a gentleman and well read. he's also a killing machine and proud of it. proud to serve, that is.

if this seems a little interesting - get it. you will not be disappointed!

Where does Damn Few rank among all the audiobooks you’ve listened to so far?

Damn Few is the best of its kind.

What other book might you compare Damn Few to and why?

American Sniper, Lone Survivor, and Service due to the branch of the US military and the intensity.

Absolutely. I cannot get enough of these stories. Given that it is directly from the author makes it so much more meaningful.

I have been studying the Navy SEALs since joining the Navy in 1998 because I was never allowed to be a SEAL myself (I am female, you see.) Despite my obvious disqualification, I was honored to have worked with and enjoy the company of many SEALs during my time. I miss my friends who were lost on August 6th, 2011 especially. Denver does an excellent job of describing exactly what it takes to be SEAL. Thank you for what you do Denver.

Where was the attention to detail?

The story was just fine. The narration left for much to be desired. I understand that the author is a do it yourself type of guy but he is far too monotone to convey a story like this even if it is his own. The listeners have to be moved--I wasn't. I was very disappointed that the recording was this poorly done. There were edits that should have been removed that were left in! The story itself was decent. If you have the money to spare I'd just buy the physical book.

What made the experience of listening to Damn Few the most enjoyable?

The story of the Seals is awesome. The camaraderie, pride and excellence championed by the Seals inspires me.

What was one of the most memorable moments of Damn Few?

Rorke's telling of the last couple of days of hell week tend to stand out the most to me. The hallucinations and the "steel pier" experience are particularly noteworthy.

I think the narrator made the story as well as detracted. The fact that it was the "real" guy telling the story helped. His monotone delivery and somewhat dry style didn't help the story.

I loved it when he talked about his daughters and the lessons he wanted to teach them.

Well worth the purchase.

It was a good story, but it didn't stand out from to many other seal stories. But I thank him for telling it

If you've seen any Seal or Buds docs or read any books then you will get nothing new here. The stories and insight were bland. Now if you've never heard anything about the Seals or special forces, I'd recommend many other books.

This guy's voice can put anyone to sleep.