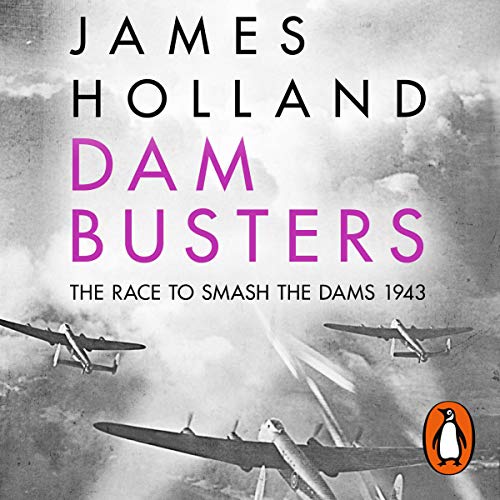 It was the night of May 16th, 1943. Nineteen specially adapted Lancaster bombers take off from RAF Scampton in Lincolnshire, each with a huge nine thousand pound cylindrical bomb strapped underneath them. Their mission: to destroy three dams deep within the German heartland, which provide the lifeblood to the industries supplying the Third Reich's war machine.

From the outset, it was an almost impossible task, a suicide mission: to fly low and at night in formation over many miles of enemy occupied territory at the very limit of the Lancasters' capacity, and drop a new weapon, which had never been tried operationally before, at a precise height of just 60 feet from the water at some of the most heavily defended targets in Germany. More than that, the entire operation had to be put together in less than 10 weeks.

When visionary aviation engineer Barnes Wallis' concept of the bouncing bomb was green lighted, he hadn't even drawn up his plans for the weapon that was to smash the dams. What followed was an incredible race against time, which, despite numerous set-backs and against huge odds, became one of the most successful and game-changing bombing raids of all time.

a really interesting audible book. well read and didn't feel monotonous at all. really worth while purchase. especially interesting what happened after the event and the impact in the war effort.

I have a wide interest in the history of the Second World War and was looking forward to listening to a modern and updated insight into the developments that lead to the development of the "bouncing bomb". The author has done a great job researching this history and the long road Barnes Wallis had to get his ideas excepted. Hoever I think he should have found someone else to do the narration maybe it's me but I found his narration incredibly irritating. It is all very well to be passionate but he reminded me of a true enthusiast who doesn't so much talk to you but lectures and hectors you with such passion that he turns you off the topic. I felt like I was listen a really forceful but fundamentally tiresome lecture. So obviously my taste, great subject but another narrator with some distance from the topic would have been much better.

A different take on a well known story

After seeing the movie a number of times I thought I knew the story of the dam busters. But James Holland's story brought to life both the story behind those that flew the missions (including people who were integral but not part of the movie) but also the story behind the making of the bombs and the people who made it possible.

The story is both very entertaining and educational.