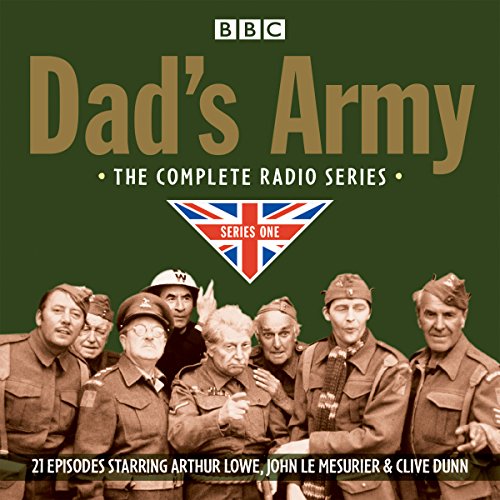 In 1973 the BBC adapted its hit TV series for radio, featuring the original TV cast and characters. Three series were broadcast between 1974 and 1976, with episodes adapted from their TV counterparts by Harold Snoad and Michael Knowles.

Now you can enjoy once again these unique recordings, with a supporting cast including John Laurie, James Beck, Arnold Ridley, and Ian Lavender. Among the 21 episodes are "The Man and the Hour", "The Battle of Godfrey’s Cottage", "Sgt Wilson’s Little Secret", "Something Nasty in the Vault", "The Menace from the Deep", and "No Spring for Frazer."

How can you not love these guys.. and odd lady

Dad's Army is a often repeated and often enjoyed series. The characters are wonderful and are like everyone's grandad.

I have loved the TV show since I was a young lad and continue to do so now I am much older.

The only downside for me is that these are straight from TV and therefore some of the humor is visual. However, I defy many people not to have seen the episodes and remember them well for this to only be a small downside.

Highly recommended to brighten any dull day. I am still working my way through for when I have a particularly trying day or feel the need for a lift. This is one audio book I go too.

several short shows, easy to listen to on a commute, or as a break between more serious content.

Timeless humor. I was surprised how great the writing and performances were. A real treasure, with humor and wwll history to boot.