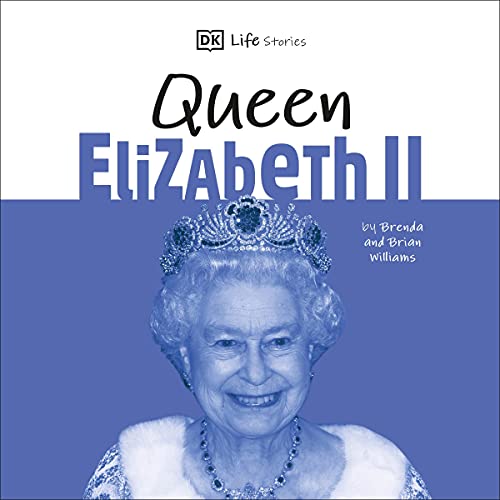 At just 25 years of age, Princess Elizabeth succeeded King George VI to the British throne. This compelling audiobook looks at Elizabeth's life as both a public and private figure. It traces her early years as a princess, her experiences in the women's army during World War II, her coronation and her life as queen both at home and in the public eye. The audiobook looks at Elizabeth's marriage to Prince Philip, her husband of more than 70 years, and her life as a mother to her four children, including her eldest son Prince Charles, the heir to the throne. In this biography audiobook for kids ages eight to 11, learn how Elizabeth has worked alongside 13 British prime ministers, met leaders from around the world and has remained a stable presence as head of the British royal family.

This new kids' biography series from DK goes beyond the basic facts to tell the true life stories of history's most interesting and inspiring people.

Authors: Brian and Brenda Williams are highly experienced writers of history books for children. They have written numerous biographies and books on royalty, including Queen Victoria, published by Heinemann and Kings and Queens (of Britain) for Pavilion Books. For the BBC, they have written life stories of Queen Elizabeth II and Prince Philip for use by teachers in Britain.

Literacy consultant: Stephanie Laird is an instructional coach at Mitchellville Elementary in Mitchellville, Iowa, and is currently serving on the International Literacy Association's (ILA) Board of Directors through 2019.

Consultant: Dr. Elena Woodacre specialises in queenship and all things royal. She has published some books on royalty and has run workshops for children on medieval queens.