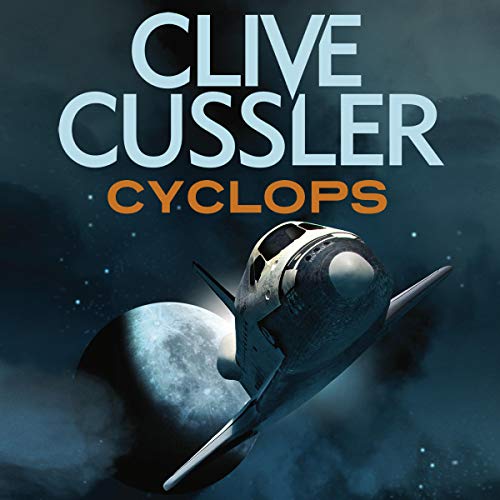 Dirk Pitt doesn't go looking for adventure: it finds him easily enough. His chance witnessing of an airship disaster - which nearly kills him - and subsequent discovery of the gruesome fate of the crew sets in motion the most nail-biting chain of events of his career. The hijacking on a golf course of one of the world's most powerful leaders; an exotic but outrageous undercover operation in the Caribbean; the sinister intrigue of a secret power base on the moon...Pitt's considerable resources and guile are about to be tested to the limit.

But when he finds a trail leading towards a fabulous treasure hidden fathoms deep in the ocean, Pitt realises he is on to something very special indeed.

For somewhere in the raging waters lies the legendary lost lady of El Dorado, the golden prize that had already lured thousands to their graves....

"Clive Cussler is the guy I read." (Tom Clancy)

Always an adventure and we ride along.

I loved it. This books make you part of the adventure. I hate to think that I may some day run out of Clive Cussler books.

with a Clive Cussler adventure. Pure entertainment. I'm glad Hollywood has only ruined one of his books.

I’m a huge Clive Cussler fan and this is his best mystery/thriller to date. Scott Brick does another masterful performance

This Space Needs a Title

I very much enjoy reading stories with characters I've come to like and plots that are fun and surprising. Just when you thought the book was complete, there's another two hours to go. Even though the book is 30+ years old, the President pretty damn unhappy and almost killed our hero a few times. It could be 2020!

when Cussler states that Soviet cosmonauts are chain smokers and alcoholics. that is again Cussler the racist taking.

This could easily have been the best “Clive Cussler” book - were it not for a few flaws:
* Too long. I’m quite OK with long books but not when they contain three distinct stories. Within this book is not one story but at least four. Expanding the book into distinct four stories took away from the focus on the individual stories, a couple of which were really really good, and had an anticlimactic effect on all of them. This should have been a series of 4 books.
* Lack of virtue. Dirk Pitt, being, despite being a fictitious person, should have remained the virtuous character that he was in other books. The book is, of course, a wild fantasy however I personally enjoy a hero who is virtuous. In this story we have Dirk Pitt killing people who happened to be in the way and were in no way villains. Gratuitous violence. Makes Pitt seem like a sociopath who has no problem killing innocent bystanders. That sucks. I do not like anything that besmirch is the character of Dirk Pitt - or, for that matter, of any hero of any book line/story - fantasy or otherwise. The world is full of books to behave in that manner. Clive Cussler‘s books I’ve done a good job of keeping their superheroes, so to speak, almost pristine in nature.
* Sex: Pitt has sex with a married woman. Additionally she’s somewhat of a slimeball. Unnecessary and nicked his rep as a virtuous superhero.
I’d recommend rewriting this book into a series of 4 books.

This book had so many adventures going on. It maintains your interest and keeps you curious.

One of my favorites of the Pitt series. Some of Cussler's absolute best. Great to re read.

A little long, but what a trip, simply fantastic. Bravo once again to the Master, Clive Cussler.

This was really a wonderful Audible book. I just finished it while sitting in my car watching a parade. In a way, reminded me of the parade of characters and stories that were coming through this audible book. I loved all of the historical references the tremendous action parts of the story and the person who read the story. What a great reader.