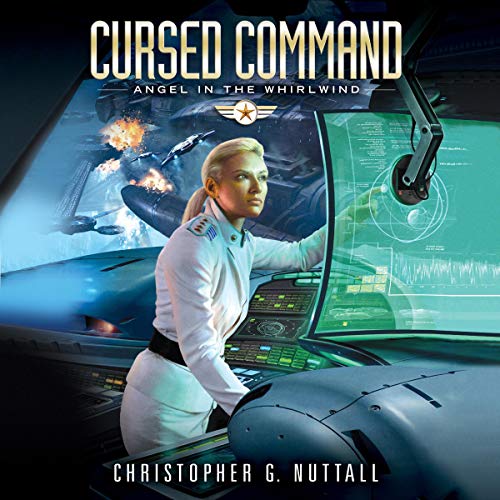 Captain Kat Falcone owes her life and career to her former right-hand man, William McElney, and she did everything in her power to make sure he was front and center for a promotion. But now that he has it, she fears he'll have to watch his back. Captain McElney has been assigned to HMS Uncanny - nicknamed Unlucky - a heavy cruiser tainted by the mysterious deaths of two former captains and rumors of mutineers. Nevertheless, as the interstellar war with the Theocracy rages on, the Uncanny will travel in tandem with Kat's starship, HMS Lightning, to the notoriously lawless Jorlem Sector to forge alliances for the Commonwealth and quash rampant piracy.

As Captain McElney struggles to whip a hostile crew of miscreants into a disciplined fighting force, Kat is saddled with an undermining new executive officer - an untested aristocrat whose bigotry colors his sense of duty. Both captains wage war against ruthless pirates while conspirators aboard the Uncanny plot to seize the ship. When the starships find themselves locked in a death match with an enemy juggernaut, Kat must make a desperate and devastating sacrifice.

Good but not grreat

I've liked all three of the books so far. Not great but good fun, enough so I will buy the fourth book.

Ok story, narration although good could use work

Ok story and the narration was good however a note to the narrator: Professional naval officers would generally not whine about incomming missles etc... Emotional responses of a civilian would "generally" not be the same as the calm cool profession demeanor of someone who knows what they are doing. Regardless good performance.

still waiting for the story to get somewhere

Kat and newly-promoted Sir William team up to battle pirates, make friendly associations with other worlds, and and continue to harass The Theocracy. Along the way, they each must deal with recalcitrant crews. Actually, in Kat's case, it's a pompous fop of a new Ex O, who is introduced as if he will be a major player, but this conflict isn't mentioned again. This is a recurring flaw in this new series: a large plot element just gets dropped. But, on Sir William's unlucky (cursed) ship Uncanny, we get a bigger plot hatching. It's not much of a surprise since it is set up in the Prologue, but how Sir William will overcome IS the story.

The story is interesting but doesn't move very far. Discover some pirates, save their hostage slaves, bemoan their brutality; outwit The Theocracy and blow up their ships. There isn't much to the plot, just a little mission and come back. We readers are plodding along because this is, afterall, Nuttall, and we expect great things. Maybe they will come. But while you're waiting, go back and revisit the Empire's Corps.

Lauren Ezzo continues to narrate this series. She has matured and improved in the interim between volumes, and this is a big relief. It is sad that the best that can be said is that she still isn't good, just not as bad as she had been. The biggest issues from the other books are diminished. Her voice is still light and breathy, but less so, and she doesn't attempt to push her throat to make male voices. The women sound a little better, but still very young and hesitant, not like trained, confident bridge officers. Her hyper-correct pronunciation of the plosives still causes the sensation that you are listening to a beat box performer -- p,t,k p,t,k p,t,k -- but there aren't extra syllables or confusions from this as there had been.

We'll keep reading or listening because we believe in Nuttall, but if this were your introduction to him, you probably wouldn't.

This is book three in the Angel in the Whirlwind Series. Captain Kat Falcone’s XO, William McElney, receives a promotion to Captain and is given command of the HMS Uncanny whose nickname is “Unlucky”. The prior two captains of the Uncanny have died mysteriously. There are rumors of mutiny among the crew or spies from the pirates. The Interstellar War with the Theocracy continuous from the prior books. The HMS Uncanny is to follow Falcone’s ship HMS Lightning to the lawless Jorlen Sector. Their mission is to obtain allies, fight the Theocracy and pirates. At the end of the book, Falcone and McElney both faced boards of inquiry for losing their ships.

The book is well written. The story flips back and forth between Falcone and McElney. The characters are continuing to develop. Nuttall is creating an interesting universe. The space battles are nail biter. Nuttall also has a political plot intertwined with the war and pirate’s activity. Looking forward to next book.

The book is just over twelve hours long. Lauren Ezzo has done an average job narrating the book. She has narrated the series. I think I would have preferred a female narrator with an alto voice instead of Ezzo’s soprano voice.

Fun series that is staying fun

What made the experience of listening to Cursed Command the most enjoyable?

It was just a fun light listen like the other two

What was one of the most memorable moments of Cursed Command?

Taking the pirate base

The bridge scene at the climax of the mutiny

The chief mutineer pointing out that the difference between his being a mutineer and being a mustang was just a matter of prejudice in the kingdom.

It's a fun series and Nuttall is keeping the standard up with each book. No drop off and each book ends satisfyingly not in a ridiculous cliff hanger.

The search for allies and life among the pirates

William receives his first command - a cursed ship - and along with Kat and her ship is sent to suppress piracy and lawlessness in the border worlds unaligned with either of the major combatants. While William deals with traitorous elements of an abused and forgotten crew Kat is forced to deal with a political appointment for her first officer. Suppression of pirates, a mutiny and a fight with a large Theocracy battle cruiser provide plenty of action and mayhem.

This series is getting better and better. The first two books the narrator was lacking in emotion and difference in characters voices but this book she did an amazing job!

I have enjoyed this series very much!! And this book was no different!! Well written and we'll performed!! Can't wait for the last book!!

Narrator is getting better

Narrator is getting better at separating characters, I liked the story-line, but almost quit after the 1st book. Now that it's easier to know who is saying or doing what, the books are much more enjoyable.