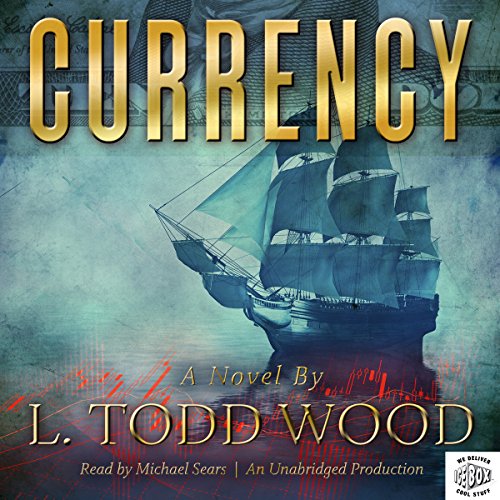 It is said that if you don't know history, you are doomed to repeat it. Currency combines multiple historical strands that converge on the number one issue of our time, the geographic location of economic and military power in the 21st century. Economic Thriller! An incredible story of power, romance, revenge, and international finance spanning three centuries. The issues could not be timelier.

In Currency, Wood has pulled off a first novel that captures the listener with a pause-registering adventure, while it addresses head-on the most pressing and intense global economic, military and political issues of our very challenging current times. Wood's real world experience on both Wall Street and at the center of the US Military Special Operations world, combine with his love of history and command of current global issues, to create a story that is as intense and gripping as it is timely. Currency weaves the historical adventures of our US Founding Fathers who built the country's early economic structure, with current day hero Connor Murray. Connor unexpectedly finds himself thrust into a world shaped as much by greed, betrayal and violence as it by heroism, loyalty, love and the quest for personal peace.

Fate forces Murray to navigate events that play out on the world stage. The United States' current economic weakness collides with its international rival's very real drive for economic, political and military influence. This collision produces an intense drama and adventure that is as scary as it is possible amidst the world's current state of affairs and balance of power. If you love a good adventure story on both the personal and international level; if you're concerned about how the United States’ current economic challenges could play out for the country in a very real way; and if you want to be an early listener of a new author who has tremendous promise - Currency is definitely a must-listen.

Currency - Outstanding - A Must Read!

What made the experience of listening to Currency the most enjoyable?

I am a fan of U.S. History. Currency is all about the national security consequences of our overwhelming sovereign debt. Wood has a second novel titled "Sugar", and the hero, Conner Murray, returns.

It is written as if it were taken right out of a college [world] history book and current day news.

I can't say there's a favorite scene, although I loved the adventure and intrigue at the U.S. and global levels. Wood has a beautifully written story that takes us back in time to the days of our forefathers.

I had the opportunity to meet Wood earlier this year at one of his book signings in South Dakota. Wood is well-versed in world events and the global financial markets. I learned he recently completed and released his third novel, Delta.

Love it when books insert current facts and seek not only to entertain but to inform. This book is a page turner and would recommend it to everyone, and brings up why everyone should be concerned about U.S. Debt

Must Read - fast-paced and gripping

If you could sum up Currency in three words, what would they be?

Wood's love of history of our founding fathers who built the early economic structure, and the current day hero, Conner Murray portray a likeness to the U.S. history and current day global happenings.

Connor Murray is thrust into a world of greed, betrayal and violence... so much like the world we live in. The novel has heroism, loyalty, and love in it.

Wood’s novel Currency is full of adventure, combining the economy, the military issues and the political issues in the global theater we face today. I (the reader) have limited exposure to the financial trading on Wall Street, and special operations of the U.S. Military.

Wood excels at weaving the plot around the historical backdrop, which leads the reader on a trail of treasure and international intrigue. It ties in the past and brings everything full circle to today's time with the U.S. national debt crisis. It's a story with many pieces taken out of the current day news.

The novel was written from Wood's Wall Street experience as well as his time with the U.S. Military Special Operations. The reader can feel his love of history for our founding fathers who built the early economic structure, and the current day hero, Conner Murray. Connor Murray is thrust into a world full of greed, betrayal and violence. That world is shaped by his heroism, loyalty, love and the quest for personal peace. The reader finds Connor Murray forced to navigate events that play out on the world stage.

Wood’s command of current global issues has created a story that I found both fast-paced and gripping.

Mystery/Adventure with a American Historical Twist

Mr Wood has written a tale that deftly blends American historical characters into a current day mystery. His use of real issues of today (the National Debt) and recent historical events (9/11) make for not only a thoroughly enjoyable story, but one that is thought provoking in today's political climate.

Mr. Wood has the ability to describe his characters in such a way as to bring them alive for the reader. This brought, for me, an emotional attachment to what they were going through. Not only in their trying to solve the mystery, but in the gains and losses in their personal lives.

I was in the grip of "Currency" up to the last two words. I wondered til then if Mr. Wood, as an author, would or wold not "chicken out". (You'll have to buy the book to understand) What I will say is he didn't disappoint.

I had not bought a book for some time because I was looking for something different. I found it in "Currency". So much so I bought his next book, "Sugar". I am eagerly anticipating the adventure.

Where does Currency rank among all the audiobooks you’ve listened to so far?

Top. Very Top. So far, it is Number One. This book absolutely rocked. Adventure combined with history all framed within the narrative of the present financial climate...what's not to love?

Have you listened to any of Michael Sears’s other performances before? How does this one compare?

No, but I will look for him now.

This was my first Audible book and now I'm hooked. It was a great thriller with plenty of loops and hooks. Loved it. I highly advise anyone who is thinking of getting this to do it, sit back, and enjoy.

Currency is a "must read".

Where does Currency rank among all the audiobooks you’ve listened to so far?

Currency is ranked near the top. I listen to a lot of material during the work week. It was a pleasant experience listening to this book.

Currency can be easily compared to a U.S. history book, and our life in modern times. We are repeating history. Many people do not realize what we are facing in the bigger picture with global economic concerns, and military and political issues.

Have you listened to any of Michael Sears’s other performances before? How does this one compare?

I have many audio books, of which this is my first narrated by Michael Sears.

The book reaffirmed things we already know about the financial problems facing America today. This story follows history, and we are repeating it.

I recommend this book to persons who love history. I enjoyed Wood's writing style.

If you could sum up Currency in three words, what would they be?

Anything by Dean Koontz or Brad Thor.

I felt he was excellent at putting the listener there. Rather than just "hearing" it.

I would say it was the developing relationship between the FBI agent and the main character.

I would reinforce that Mr. Todd is excellent, not just in his story-telling, but in conveying the history of what occurred before, and his ability to bring the scene alive for the reader/listener.

A Timely Novel For Our Times!

What did you love best about Currency?

Found myself sitting in my car in the parking lot in the cold to finish this one. I commute a good deal and I only find time to listen to audio books. A real page flipper... Even though it was released a few years ago, wow, how timely! Every American should read, listen, whatever...

Definitely Connor Murray - rooted for him the whole way...

The performance could have been better but I enjoyed the book.

Anyway of any country, outlook on life, would enjoy this book!

This had the makings of a great book but the author lacks any real literary brilliance. He’s a great researcher, based on the historical content in the book. But the characters were undeveloped, the plot was clear as mud and I just didn’t believe a word of this fictional narrative. I WANTED to like it, I really did. And the narrator was great. But the book was HORRIBLE.

Currency was a thoroughly enjoyable read! Mr Wood is a masterful storyteller with descriptive language to put the reader on location. The reader of this book did it well. Plan to read another of the author’s works soon. Five stars across the board.