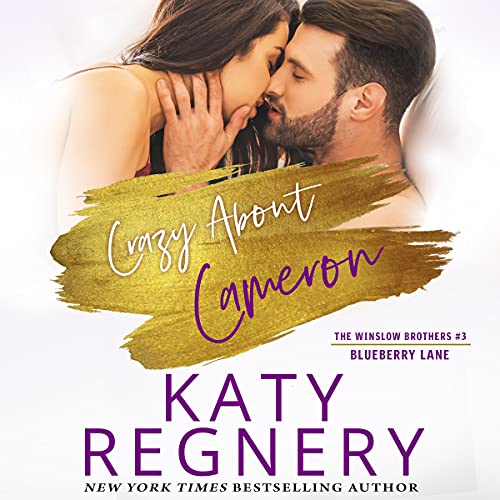 Crazy About Cameron is the third of four books about the Philadelphia-based, wildly-handsome Winslow brothers who are all on the look-out for love.

(Say what? Not so much.... Brooks and Pres are OFF. THE. MARKET, and Chris is so distracted with his campaign, he can't see what - or who - is right under his nose.)

With her stiff posture, black-rimmed glasses and chestnut waves in a tight bun, Cameron Winslow's downstairs neighbor, Margaret Story, has long been the unaware star of his filthiest dirty-librarian fantasies. But with a floundering business eating up all his time, Cam doesn't have the open road he'd need to date a lady like Margaret.

Margaret, who grew up down the road from Cameron, has always thought of him as a cross between a bully and a tease, as likely to pull her braids as pull her leg. But he's grown up to be a smokin' hot businessman, and Margaret can't help daydreaming about what it would feel like to be under, um, with someone like him.

When hot-headed Cameron and buttoned-up Margaret start using the same shady contractor for apartment renovations, Margaret may find herself in some unexpected trouble, which forces long-hidden feelings to come out of hiding...and might just make way for two unlikely fantasies to finally come true.

Return to the world created in the English Brothers books with this fresh foursome of scorching hot Winslow Brothers!

Margaret was a disappointment. It took her too long to realize her own self worth and stand up for herself to her father and act like she knew her worth. Quit being a yes dad girl!!!! She kept living in the shadows of her dad and was a scardy cat with Cameron for too long. Live before you die!!!! I voluntarily listened to a free copy of this and am giving an honest review. The narrator seemed too teeny bopperish for this and not a good fit.

If you should read only one book in the series

My favorite of the series so far! The little suspense element brought some excitement, and I felt this one was especially sexy. All good points.

The main theme was changing one’s life, with Cameron unwilling to keep his dead father’s business and Margaret aspiring to a life outside her disconnected family. The contrast between both family was interesting–Cameron’s is really supportive, while Margaret’s mostly doesn’t care, and her father is downright hostile.

The sparks were amazing between them each time they met. While their relationship changed, the anger or irritation became desire and heat. It was so sexy!

I enjoyed seeing the other Winslow brothers–and their sister–especially since all the books in the series happen more or less at the same time.

I felt the narrator did a better job here than in the other books. Maybe her pace and voice sounded better for Margaret and Cameron’s story.

If you should read only one book in the series, it should be this one!

I asked to receive this free review Audible book and wrote this unbiased review. Katy Regnery has written a captivating love story that will have the listener swooning. She writes a story that is so realistic that the reader can relate to it. Cameron is an alpha with a heart of gold. He is there to help Margaret but doesn't pressure her. Margaret works so hard to try to gain her father's approval. The kindest thing I can say about him is that he is a jerk. Both Cameron and Margaret are not happy in their jobs. This slow burn romance will make it extremely hard to leave the book. Fate gives these two a chance of finding love. There is also some danger that finds Margaret. The narrator helps us experience the desires and emotions of these characters. I highly recommend this Audible book.

My second fav of the series

This is a good one! It combines fun elements with a bit of danger with family disappointment. I loved how devoted Cam was once he got his head on straight and decided to go after her. These two have some hot scenes between them but also have some super sweet moments. This is my second favorite so far. I did listen to this on audio and Lauren Sweet does a wonderful job being all these characters.

One of my favorite authors .

Crazy about Cameron is less serious and more fun than the previous two books in the Winslow Brothers series. Cameron Loves pushing Margaret's buttons. Whatever gets her to notice him. Margaret considers Cameron to be a nuisance that has terrorized her for as long they have known each other. As she gets older she learns not to take him too seriously. That proves to be her biggest mistake. I liked Cameron. His comedic, easygoing personality covers a well of deep feelings and a heart that seems more fragile than one would expect. Margaret is less confident than she presents and her outer personality proves her protection against her inner anxieties. I have read every book in the Winslow series so far. Ms. Regnery's ability to attract readers to her complex characters and poignant stories is why I am a huge fan. I look forward to reading every new release and revisiting prior stories. The personalities of her characters mixed with the combination of her writing style are mesmerizing to behold. One of my favorite authors .

“Bidding on Brooks” (Book 1) was superbly enjoyable because there was such a strong story and the sex, while it was well written and off the charts hot, was limited to a few amazing scenes with some things left to our imagination. It feels like this same author in “Crazy About Cameron” (Book 3) followed suit along with many other romance authors recently in allowing an overwhelming amount of sexual detail to water down a book that could have otherwise been captivating. This was more of a Sylvia Day novel than I really care to read anymore. These kinds of novels are a dime a dozen and I’m so ready for authors to stop using sex as fillers and give us MORE...something that stays with us long after we’ve finished reading. This book won’t leave you spellbound but it’ll pass the time.

Would you listen to Crazy About Cameron again? Why?

Yes, if you are looking for easy, cute love story, these books are you. Not too much drama

Have you listened to any of Lauren Sweet’s other performances before? How does this one compare?

This is my first time.