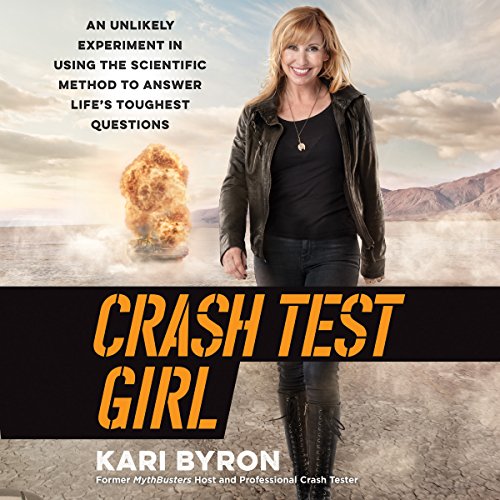 Kari Byron's story hasn't been a straight line. She started out as a broke artist living in San Francisco, writing poems on a crowded bus on the way to one of her three jobs. Many curveballs, unexpected twists, and yes, literal and figurative explosions later, and she's one of the world's most respected women in science entertainment, blowing stuff up on national television and getting paid for it!

In Crash Test Girl, Kari reveals her fascinating life story on the set of MythBusters and beyond. With her signature gusto and roll-up-your-sleeves enthusiasm, she invites listeners behind the duct tape and the dynamite, to the unlikely friendships and low-budget sets that turned a crazy idea into a famously inventive show with a rabid fanbase.

The truth is, Mythbusters was never meant to be a science show. But attaching a rocket to a car, riding a motorcycle on water, or lighting 500 pounds of coffee creamer on fire requires a decent understanding of chemistry, physics, and engineering.

Thus, the cast and crew brought in the scientific method to work through each problem: Question. Hypothesize. Analyze. Experiment. Conclude.

And as Kari came to learn in her own life, not only is the scientific method the best approach for busting myths, it's also the perfect tool for solving everyday issues, including:

Crash Test Girl reminds us that science is for everyone, as long as you're willing to strap in, put on your safety goggles, hit a few walls, and learn from the results. Using a combination of methodical experimentation and unconventional creativity, you'll come to the most important conclusion of all: In life, sometimes you crash and burn, but you can always crash and learn.

Loved the book.
The way Kari used different myths the process behind them to present different aspects of her life was great.
There was never a dull moment, and her presentation was full of nuance. My only complaint is that the book had to end.

Would definitely recommend buying this book.

Kari is amazing and so is this book!!!

Learning about Kari’s sometimes difficult and always inspiring life has been entertaining and thought provoking. I’ve loved watching her on TV and now I love her even more! Great job, Kari! I can’t wait to see what you do next!

This was a great book, and I love that it was read by Kari herself, it's like her sitting in your living room telling you her life story.

Give this to your daughter to read !

As a father who named his daughter after a half Klingon chief engineer, I have always believed in empowering girls to do whatever their hearts desired. Crash Test Girl both warms my heart about the potential for girls in science, but also acts as a painful reminder that the work is unnecessarily harder for girls vs boys.

Crash Test Girl is everything you expect from the author, but a heck of a lot more. Kari does not hold back the rough times, and I think this is essential in telling her story, that working hard on something you love outweighs the bumps in the road.

Parts of this book I shared with my daughter, because I want her to know that women in Science, Technology, Arts, Engineering and or Math, is not a mountain, but more of a flight of stairs you take a step at a time.

Inspiring, thoughtful, and engaging. I came out the end of the book with a greater appreciation for the struggles faced by women in this field - and more importantly, vow to be part of the change that will make these struggles something of the past.

Fascinating insights into the real Kari

The story of Kari and how she got to the show and beyond is truly a fascinating tale of strength, courage, and a lot of luck. This book is everything you ever wanted to know about Kari, but was afraid to ask. In fact, the listener may learn some things they don't want to know.

Crash Test Girl kept me interested all the way through it. Her narration makes the audio version doubly good. Kari's delightful sense of humor made the miles go by fast. I'm glad I listened to it and give it my highest recommendation.

I always liked Kari. This book taught me even more about her and and her mindset. Great listen.

Although not a book I would normally have picked up , I'm so glad I did. She has certainly taken full advantage of what life has to offer and has done so with a gusto that many others should aspire to.
Glad to find out about what happened with Mythbusters and what she went on to do. Kari is someone who I could definitely look up to.

Enjoyed hearing Kari read, I was concerned that the reviews mentioned it was "girl power" heavy, but I didnt find it to be....I enjoyed the listen as an avid Mythbusters fan, maker and entrepreneur. I loved to learn about your drive and love for life.

Myth - “you should listen to this book”. Result? Confirmed

A great listen to a warts / explosives and all look into the interesting and not conventional life of Kari Byron who we all love from Mythbuster days. Well written in a very relatable way - with lots of tips from her journey so far. Enjoy and thanks Kari for taking the time to write this.

a good book light on the feminist stuff

it was a good book and a great life story of over coming. it did get a tad too feminist for me. I know, i know, but my wife is a CEO of a major company and she said if women complain about not enough women in the workplace then stop putting on make up and go get a real job. you c As not blame men for you not getting a college education. but book was worth it. she was always great in mythbusters.