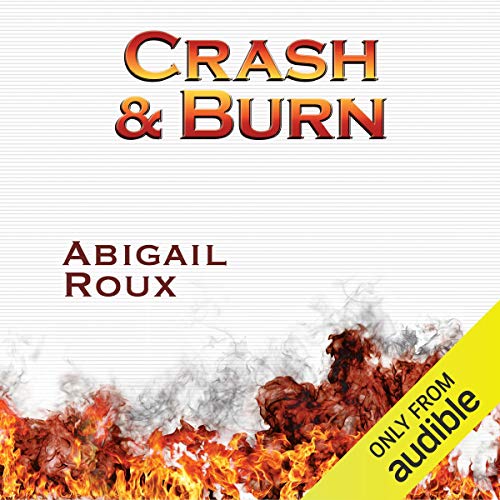 It's been five years since Special Agents Ty Grady and Zane Garrett first worked together to solve the Tri-State murders, and time has been both harsh and kind. Engaged now, they face the challenge of planning a deeply uncertain future together.

Zane is at the pinnacle of his career with one last mystery to solve while Ty is at sea in a world where he's no longer the tip of a spear. There's just one more hurdle in the way of their happy ever after: a traitor from their inner circle who threatens to burn their world to the ground. Squeezed between the Vega cartel, an unknown mole, and too many alphabet agencies to count, Ty and Zane must gather all their strength and resources to beat the longest odds they've ever faced. To make it out alive, they'll need help from every friend they've got. Even the friends who might betray their trust.

Would you consider the audio edition of Crash & Burn to be better than the print version?

I've only listened to this series, but I can't imagine the print copies not being good.

What other book might you compare Crash & Burn to and why?

Any other book in this series, or the Matter of Time series by Mary Calmes. Both are very well written, narrated and emotionally intense.

The wedding. It was so blissfully boring and I loved that Roux gave Ty and Zane that small reprieve.

All of the above!

Ty and Zane have survived so much, fought so hard for the right to love each other. Their life will never be boring, but a little bit of sunshine is always appreciated, even for half psycho FBI agents that like to shoot things. Ball & Chain ended with Zane finally accepting Ty's proposal, and this book starts with their wedding. I was sitting on my head in the few minutes leading up to the ceremony, fearing Roux would pull out some sort of ninja on a wave runner with an AK47 to destroy the nuptials. I was so very pleased, and even in tears, as Ty and Zane had probably their first ever day of peace to have a quick civil ceremony on the water with Livvy and Deuce by their side. The wedding night was full of passion and love we've come to expect from these two. When the bell tolls one, all bets are off and the madness begins by way of a battered, bruised and bloody Nick landing on their doorstep with a gunshot wound.

From this moment on the action was non-stop, the suspense insane and the body count climbing as Ty, Zane, Sidewinder, the Cia and Nia set out to take down the Vega cartel that won't stop until Ty and Zane are dead, buried and burned to the ground. It just so happens that the afore mentioned list of crazy people and agencies with nothing but alphabets in their name feel the same way about the cartel. Now the race is on to see who can take down whom first.

I have mixed feelings about this book. I love the characters and their story, but I'm sad that this is the last HooRah for Ty and Zane. Five years after that first tryst in a hotel room while investing the death of one of Sidewinders team members, Elias Sanchez, Ty and Zane are moderately healthy, mostly happy and ready for the next chapter. Too bad their pasts didn't get that memo, because everything is about to come to a gnarly head and not everyone makes it out with their life.

What I have thoroughly enjoyed about this series is that nine books in, and I'm still intrigued, sad in fact that it's the last one. Every installment has brought something new to the table, more madness and chaos for Ty and Zane and everyone they care about. These two men have literally been to hell and back, and back again, a side trip to New Orleans where the devil himself was knocking on their door, and now they find themselves facing down those demons, praying they will make it out alive. These books are action packed, emotional, dramatic, passionate and intense.

Narrated by JF Harding and it's amazing how he pulled off so many different voices and never, not once, mixed them up. Everyone has their own distinct voice that wavers occasionally depending on the characters mood or the circumstance at that time in the story. As I said, this is probably the most intense, emotional book of the series and Harding captured every ounce of the pain, fear, love, elation and desperation with tones and nuances as he voiced the characters. I hadn't listened to anything from him prior to this series, but I will probably seek him out for his voice chops alone in the future.

If you are a fan of this series you are going to love this final climax for this multitude of characters you've come to know and love. Everyone that is anyone in the Cut & Run universe, that is still breathing that is, is back for their 5 minutes of page time. As I said, it's very bittersweet. Sad to say goodbye, but the boys definitely went out with a bang and a smile.

Not only would I, I have. It is one of my top romantic suspense series, detectives, and book in a series that I look for reasons to push on others.

As to the audio aspect, oh yes, the narration is an enhancement that I have shared about with my audio book loving pals.

I liked that the author made me feel the heights of love, ecstasy, and camaraderie and also the depths of loss and despair all in one book. Both the fact that it was emotionally engaging and intense thriller action all rolled into one make it nearly unputdownable.

Um, there are a half-dozen at least and most would bring spoilers if I listed them. But there is one where there is a case of mistaken identity and Ty and Zane nearly kill each other before they work it out. I found it humorous and horrifying at the same time.
And another deadly scene involving Chester and his shovel kicked in my twisted sense of humor.
But there are others that are ones I can't describe that left me wrung out and were the best.

If you could rename Crash & Burn, what would you call it?

This is the final book in a series that must be read in order. It was sheer adrenaline and raw nerves and left me depressed that it was all over. I will definitely re-read the entire series and listening to the last four books by this narrator only make it a better experience.

hate to see the end

its hard when you fall in love with a series and it ends. how about a few more please?

Amazing end to an amazing series

I'm really sad that this series is over. I loved every second of it. This book, though. Wow. I almost had a heart attack a few times. I cried a few times, too. It was amazing. I like how it all came together and how it ended. I highly recommend.

Omg! What a fabulous journey!

I am not a fan of police/CIA/NIA dramas, but so many people love this series that I finally gave in and listened. I have fallen in love with these characters, the story lines and don’t believe I can ever go back to “normal” romance novels. The excitement, anticipation and emotional upheaval in this series has kept me entertained for weeks! So good! So good! ❤️❤️ I will miss Tye and Zane! They are such amazing characters! Way to go Abigail Roux!!

Bittersweet end to a great series

Finally finished this series and its bitter sweet. It was good, and the addition of the Sidewinder team was a welcome boon. I’m going to miss Ty & Zane, Nick & Kelly, Digger & Owen. It has its HEA for now kind of ending. But knowing Ty & Zane, you can let your imagination run away with you. A little bonus: at the end of the ebook (not the audiobook), there is a short story of the Brick & Mortar bookstore with Ty and some furry friends that was too stinking cute.

Will definitely have to read this series again when I’m feeling nostalgic. The narrator is excellent. He distinguished each male character (and there are many, without the benefit of “he said”) beautifully. I knew who was talking. This could have been a very confusing or tricky book to listen to if this was not the case, due to the writing style of the author (switching back/forth between POV’s within a paragraph). So, I was quite pleased with the handling of the audio narration.

So I’m off to finish the last 2 books of the Sidewinder series, hoping I’ll get a glimpse of Ty & Zane there.

i will miss my boys

crazy finale to a much loved series. ty has changed so much. sad to see it end.

Fabulous End to a Series

I don't usually do reviews but this series is too good to not comment. FABULOUS.

I hate it when I catch up with the writer on a series.
I so hope there is more coming. I’m in love with Ty and Zane!!!

Thank you Abigail for creating these real and dreamy characters - funny, endearing, lovable and hot! Loved the way their love developed over the series and culminated in a very satisfied reader base!!