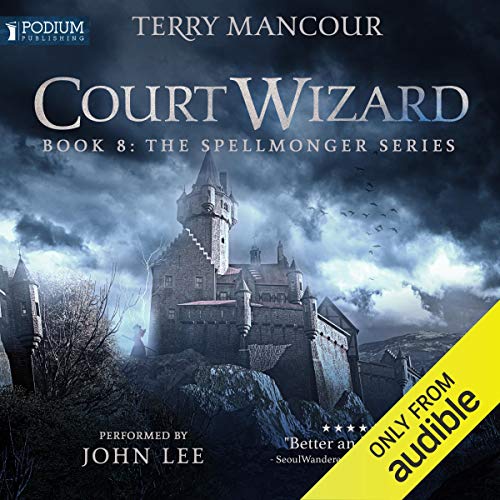 When Pentandra got married and took a new job, she knew it would be tough.

Ducal Court Wizard is supposed to be the cushiest of assignments for a mage, full of stipends, laboratories, and expense funds. But when you join the Orphan Duke’s expedition to reclaim, recapture, and restore his shattered realm to health, you have to expect things to be...less cushy.

With the south in full rebellion, the goblins stirring on the northern frontier, and the summer capital being run by a corrupt baron and a gang of thugs, things could be better. But those aren’t the worst of her problems: Pentandra is learning how to live with her new husband, Arborn, while the town is driven to distraction by an incarnate sex goddess who is organizing all of the whores, a mopey spellmonger, a nun addicted to gambling, a prude sent by the queen, undead skulking through the shadows, and a mysterious blind girl shows up in her office claiming to be her new apprentice!

It’s enough to drive any woman mad, but Pentandra is not just any woman...she’s the hope of the Alshari Wilderlands, the woman everyone knows as the Court Wizard!

a great addition if slightly weaker

Performance was solid once again. The more I listen to John Lee the more I realize how impressive his narrative skills are compared to several other narrators I've listened to.

The story itself is hard to pin down. Overall, I enjoyed the different perspective and what went down in the book. I especially enjoyed the many foresights Mancour added towards the end of this book about events far ahead into the series. I have to say I'm pumped to follow the series.

Despite that, the plotline felt odd and decentralized. Mancour doubles down on his unnecessary explanations of things the reader should have hammered into one's head at this point; don't get me wrong, I understand the need to re-explain parts of a story for each new addition to a series, but there were several of these where I wondered where the editor was vacationing for so long. And I swear that I had maybe 5+ occasions where I asked myself, "wait a second. shouldn't [character] already know this?". I actually saw that some readers decided to skip this one.

Though I sort of understand where they're coming from, I would still recommend this to any avid fan of the Spellmonger series. It provides a really neat overlapping of some previous events as well as adding to the main plotline. The character development is fantastic and deserved. And while I couldn't be certain how well Mancour did at developing the thoughts and feelings from a female perspective, I do applaud his attempt at diversifying his narrative.

A whole lot of nothing...

When i saw the length, i could barely control my excitement. 35 hours of Minalan, sign me up and throw away the key.
Unfortunately, this book is actually only about 14 hours long.

Let me explain:
The first three hours, set the stage for the book. The next important event doesn't happen until 21 (mind numbing) hours later, at hour around 24. During this time there are countless political meetings and combating insurgents using misdirection. A whole lot of talking, zero to little doing.

When my wife read the book, (shes a skipper), we found that she had 95% of the story, and enjoyed herself, using the above timings. If this was not a book related to Minalan, i would have given up around hour 5-8.

Minalan is not involved.
This book's 14 hours of actual story does advance the spellmonger series, but there are quite a few hoops to jump through.

Not sure what is going on with this series, but the last two books have been a bugger to get through. Narrator did a fantastic job as always, but could not make up for the lack of direction this book had . Not sure I'll be buying the next one. The first books in the series are great. And it seems as if the story ended 2 books so.

while most of this book is a recount or the last from another point of view it was not long until I was enjoying the story even though I knew parts of it.

Love this series. Desperate for the last two books to be available. You cannot predict where the story will lead you. So many twists, the characters always evolving.

The continuation of an amazing journey and it's getting better and better! Lee brings Mancour's tale to life with uncanny precision and enjoyment - on to the next!

I was a little disappointed at the start of book 8, as book 7 left off at a point that I was just dying to find out what happens next in the story line. But, book 8 is a different perspective from Penny’s point of view from events that other books in the series already covered. However, Penny’s detailed story line turns out to be a wonderful story as well. Penny and/or Pantandra is one of main characters in the series and book 8 really shines a light on her importance in the story line. Bottom-line another great book in the series and I am looking forward to the release of book 9.

a great addition to the spellmonger series

This one follows Pentandra, and really expands on the character. There is virtually zero warfare, but there are some small fights which keep it exciting. Pentandra is a great character, and I am glad this book focused on her experience. However I do prefer the books that follow Minalan. If you liked the others, definitely read this one.

Out of the park

Another grand slam. Getting impatient, might have to buy the next two in paper. :)

The world building is amazing. Draws you deeper and deeper into the story. Beautifully done, and then shift was done perfectly and also opened up more room for different character exploration.