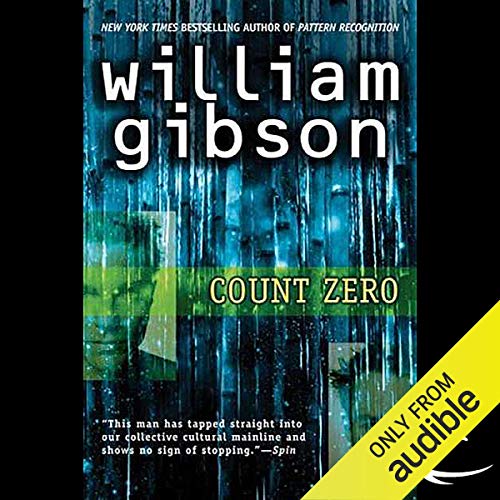 A corporate mercenary wakes in a reconstructed body, a beautiful woman by his side. Then Hosaka Corporation reactivates him, for a mission more dangerous than the one he's recovering from: to get a defecting chief of R&D-and the biochip he's perfected-out intact. But this proves to be of supreme interest to certain other parties-some of whom aren't remotely human.
©1986 William Gibson (P)2009 Audible, Inc.
Technothrillers Cyberpunk Science-fiction
Afficher plus Afficher moins

Where've you been all my life?

Discovering William Gibson and "The Sprawl Trilogy" as I fast approach forty, is like finding an unopened gift behind the Christmas tree, left there wrapped and undiscovered for the last 25 years. I'm kicking myself for not reading him earlier, but his writing is all the more amazing in 2011 for being so visionary in the mid 1980's. There are countless science fiction concepts he describes in this series that other writers have used for seeds of their own books or movies.

Jonathan Davis is brilliant as the narrator. I originally encountered Davis almost ten years ago as the narrator of Neil Stephenson's Snow Crash -- arguably my favorite audio book of all time. He does not disappoint here. All in all an astonishing creation.

From Zero to Hero

I initially found this book to be the embodiment of tedium. I tried listening to it whilst on the go, which after all should be a major advantage of this format. This however proved to be anything but an advantage, as it was so easy to become distracted from the detail of the story and I often found myself zoning in and out of the narrative and wondering who these characters were. It wasn't until two hours from the end that I really got into the story and discovered that it was really rather exciting.
It held my interest right to the end and was so good that I felt compelled to listen to it again from the beginning and WOW! what a difference. I went from only persevering with it because I had paid for it to being reluctant to put it down. It was hard to believe that this was the same book and I was shocked at the amount of detail that I had initially missed. So if you decide that Count Zero is the biggest let down you have ever received from Audible as I did, then stick with it and maybe 're-read' it. You wont be disappointed.

Read Jerry's review. I did not make it past the first third of the book. Gibson is kind of like Shakespeare, it takes slow reading and going over it, which makes it difficult in audio form. If you have never read Gibson before, I suggest you read Virtual Light first. It is not quite as complicated and has a couple of really cool characters that you will get into. There is just too many authors and books out there for me to spend this much time with one book.

#2 of the Sprawl Dialectic

Gibson's warnings about cyberspace, the matrix, electronic hallucinations, corporate excess, etc., in 'Neuromancer' served only to codify/name the culture/future he was warning about. Instead of serving as a warning, Gibson ended up vibrating, slicking, sexing a whole webby nest of proto-cyberbabies into a real cyberpunk counter-culture. 'Count Zero' appears to be him trying again, but using a different tact. He spends less time with the easy, 'fun', matrix-fueled side of the future and instead spends more time examining the people, the fragments and residue of a dystopian future where corporations have become like people and computers and AI have become like gods.

Gibson trademarks, however, are still swarming all over 'Count Zero'. It is hard to read a page without a sentence where Gibson waxes poetic about an article of clothing, a fabric type, a piece of art, or a stylized way of wearing one's hair. But still, 'Count Zero' appears to be Gibson saying, yeah, that 'Neuromancer' book you are all so turned on about is fine, but it was an adolescent idea. Let me tell you the story again, but from another way, so you can understand that it isn't sexy, it isn't beautiful, it isn't glorious. The future is dangerous, manipulative, and has the potential to completely change our relationships with with each other, with art, with our history and even with our future. Let's just slow it down a bit and think.

I'm not sure if he changed the velocity of 'Neuromancer' or changed any minds, and I'm not sure 'Count Zero' was nearly as good a book (Not a 'Godfather, Part II'), but I'm glad he wrote it and it is interesting as a reader to see Gibson gain some real confidence in his art and his message.

Young Gibson --> one of the easiest to enter...

Gibson writes with a very dense, thick weaving of concepts... artistically presented :) This early book is very easy to get into and pretty easy to follow (comparatively speaking). Almost plain English from a Gibson-ion fan sort of standpoint. BUT you will have to pay a little bit of attention until you get your feet under you. LOL. Three separate story lines converge, slowly. Very interesting story. Not terribly dated...but a tad...although not in a too jarring way if you are willing to let the story carry you along. I enjoyed it a LOT... but I'm not really "normal". Form your own opinion :)

It was all over the place

Would you try another book from William Gibson and/or Jonathan Davis?

I know I should expect the unorganized style of writing from William Gibson. He is a challenge to read anyway, but this was just too all over the place. The concepts and direction were too drawn out. The pace of this book, considering it's intensity and complex word structure, was too slow. I would zone out, getting lost on the extended dialogues.

Not a William Gibson book. I listened to Neuromancer. That wasn't as bad. I actually like it.

It was engaging. It's just too bad the story line and dialogue didn't work.

If you could play editor, what scene or scenes would you have cut from Count Zero?

I don't know, I stopped listening before the first half.

If you are a William Gibson fan, you will like this. But, if you are into futuristic sci-fi, this will even lose you.

Not as good as Neuromancer

I loved Neuromancer and had already read it before listening to the audiobook. I think this might have helped with Count Zero. The different plot threads get confusing in this format and that's more a testament to how densely Gibson writes. The performance was really good, but it was just much harder to follow than its predecessor. Like I said, this one might be better read than listened to.

It was really hard for me to follow what was going on. Gibson is a good writer, but his habit of telling stories from three or four different perspectives without given much backstory or exposition makes it tough to track what is happening. I was lost the first seven hours, and it was only until the second half of the book that I finally started to understand how the threads intertwined.

Gibson is a gifted writer, and Jonathan Davis captured the dark mood of the story. Even when I didn't know what was going on or where Count Zero was going, I kept listening.

Great look into a High Tech future, however the all the characters were unlikable. Thus I became
uninterested in them. The ideas of the digital infused future kept me interested for a while, but
in the end I could not finish it.

This is a great book of the cyberpunk genre and a sequel to Neuromancer. Society as we know it has broken down, hackers (cowboys or cyberspace-deck-jockeys) and private security are being hired to do the bidding of multinational companies. AI, the matrix, advanced biotech... all kinds of cool stuff are going down. These are all forming the background to three interesting stories that converge into the same one.

Davis' narration is amazing. The intensity, the speed, the voices, the accents... it is perfect. It is essentially because of his narration that I listen to more audio books and have joined audible. (I would also recommend Snow Crash and the Windup Girl, also narrated by Davis)

One warning is that Gibson's writing is very dense. Gibson's cyberpunk jargon is in every sentence and concentration is needed in order to understand things. You may still get the overall story, but this kind of writing is quite clever and it is fun to fully understand where the terms are coming from, so I recommend that you listen to this audio book in a setting where you can fully concentrate and you can make use of the rewind and forward buttons sometimes. I do this while walking.

Overall: a great cyberpunk novel from 1986 that feels like it's from 2006 and an amazing narration.

First of all, english is not my first language. But I never had any problems following any english audio books till now. (I've heard about 10 book in english)
But Gibsons writing style really hit a nerve with me. The first book in the sprawl trilogie, Neuromancer, was hard to follow. A lot of things are poorly explained, conversations were often like script dialogues. But it was only one plot threat.

In Count Zero you have three stories to follow and they only intertwine at the very end of the story. That makes it really difficult to pin any character to the right environment.

I never had any problems with english audio books until I heard this one. I had to read a summary to understand what was going on. And even then I would say the first book had better story development.

The story is fun and interesting, eliciting a bit of nostalgia for the hay days of 80s Sci Fi. It continues the themes of neuromamcer and takes them in new exciting direction. I also very much enjoyed the performance of the narrator who has a pleasant voice and seemed to capture the differences in diction among characters well.

The best William Gibson novel out of the sprawl trilogy. Enjoyed every minute of it.