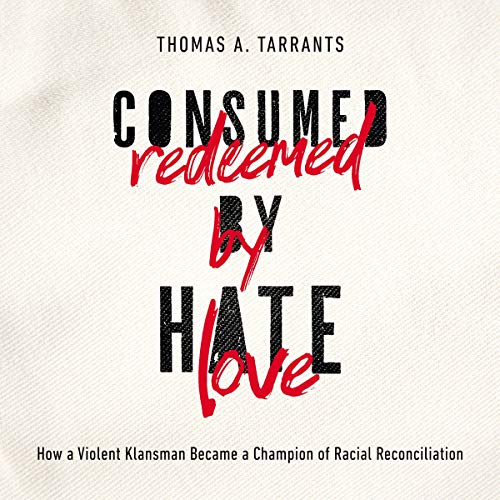 Consumed by Hate, Redeemed by Love

Consumed by Hate, Redeemed by Love

"Riveting, inspiring, at times hard to believe but utterly true...it gives some measure of hope in these rancorous times." (John Grisham)

How a bomb-making white supremacist, once called "the most dangerous man in Mississippi," met Jesus in prison and emerged a committed advocate for Christian discipleship, peace, and racial justice.

As an ordinary high school student in the 1960s, Tom Tarrants became deeply unsettled by the social upheaval of the era. In response, he turned for answers to extremist ideology and was soon utterly radicalized. Before long, he became involved in the reign of terror spread by Mississippi's dreaded White Knights of the Ku Klux Klan, described by the FBI as the most violent right wing terrorist organization in America.

In 1969, while attempting to bomb the home of a Jewish leader in Meridian, Mississippi, Tom was ambushed by law enforcement and shot multiple times during a high-speed chase. Nearly dead from his wounds, he was arrested and sentenced to 30 years in the Mississippi State Penitentiary at Parchman Farm. Unrepentant, Tom and two other inmates made a daring escape from Parchman yet were tracked down by an FBI SWAT team and apprehended in hail of bullets that killed one of the convicts. Tom spent the next three years alone in a six-foot-by-nine-foot cell. There he began a search for truth that led him to the Bible and a reading of the gospels, resulting in his conversion to Jesus Christ and liberation from the grip of racial hatred and violence.

Astounded by the change in Tom, many of the very people who worked to put him behind bars began advocating for his release. After serving eight years of a 35-year sentence, Tom left prison. He attended college, moved to Washington, DC, and became copastor of a racially mixed church. He went on to earn a doctorate and became the president of the C. S. Lewis Institute, where he devoted himself to helping others become wholehearted followers of Jesus.

A dramatic story of radical transformation, Consumed by Hate, Redeemed by Love demonstrates that hope is not lost even in the most tumultuous of times, even those similar to our own.

"As a kid in Mississippi in the late 1960's, I remember the men of our church discussing the Klan's bombing campaign against the Jews. The men did not disapprove. Later, I would use this fascinating chapter of civil rights history as the backdrop for my novel The Chamber. Now, one of the bombers, Thomas Tarrants, tells the real story in this remarkable memoir. It is riveting, inspiring, at times hard to believe but utterly true, and it gives some measure of hope in these rancorous times." (John Grisham)

"Dramatic...[s]imply astonishing...[e]ssential reading for these times. If you want to understand how the evil of extremist thought works - and how the gospel of God’s grace can overcome it - read this book." (Mark Batterson, New York Times best-selling author of The Circle Maker, lead pastor of National Community Church)

"This gripping and inspiring story is as timely as today’s headlines.... Put on your seatbelt and prepare to enter into one of the most extraordinary true stories you’ll ever encounter!" (Lee Strobel, best-selling author of The Case for Christ and The Case for Grace)

This is certainly a book for our hate filled times. The author describes how he descended into hate, racism and antisemitism and then was rescued by Christian faith. Even if you are not interested in the religious part the social part is gripping.

Loved it. This book also very different for me; fits in with the scheme and purpose of what God's plan truly is for man, human beings to whom He created. I loved it, it was honest sometimes shocking; thought provoking and educational. Opened my eyes to people who justify hatred through a distorted view of the Bible. Using the Bible in many instances to hate. Most enjoyable!!

Such a good book for our current times

This story of God’s redemptive power is amazing and hope filled. The journey of Mr Tarrants is a testimony to God’s amazing work.

The life of this man was amazing., it truly is a made for movie kind of story. The conclusion was just as thoughtful and teachable as the main theme. A small group of people could use this book for discussion on the issue within society today. I loved how scripture was added so you could reflect on that particular situation.

Wow!! Although the beginning was rather slow and unemotional, the end more than made up for it! I will listen to this book repeatedly. The last hour has especially applicable lessons for the obstacles we are facing in the summer of 2020. I loved this book so much that I ordered the hard copy.

Powerful story of God's mercy and grace, drew me in immediately and held my attention. I found the narrator very easy to listen to.

A Great Story with an Impact on Today

The life of Tom Tarrants not only sheds a light on the amazing power of a redeemed life but also points to others and asks the reader to think if the same is possible for them.

this is a phenomenal Chronicle of God's Providence in a life we might have written off.