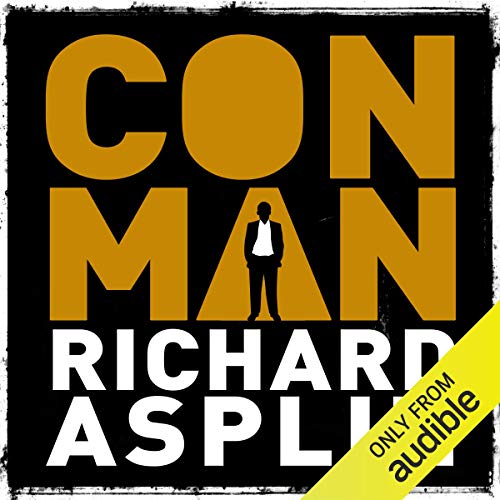 Nominated for the prestigious 2010 CWA Gold Dagger award, Conman is the story of young Neil Martin, a kindly family man. A bit geeky, a bit nerdy. If you met him, you would assume he runs a failing comic memorabilia store in London's Soho. Which he does.

In order to bail himself out of a huge stock-ruining, poster sopping basement flood, he needs to claim on his insurance. Which he would do - if he'd remembered to pay his premium.

Terrified of losing everything - his wife Jane, his daughter, his business, his home - and scared to appear the dumb, working-class pleb that Jane's father always took him for, Neil reluctantly agrees to help Christopher, a passing confidence trickster, use his premises for a big sting. So the con is on and the trap is set.

Neil meets Christopher's crew and, as he introduces them to the world of the vintage comic collectable, he is introduced to the life of the grifter. The swaps, swindles and switcheroos. The colourful patter of marks, mitt fitters, cacklebladders and cold pokes. But things are never as they seem in the twilight world of the confidence man.

And when Christopher's real target is revealed, Neil finds himself plotting, switching, swapping and scamming for revenge, for redemption. And for his life.

Somewhere in the shadows, where High Fidelity meets The Usual Suspects, where David Mamet meets Ben Elton, Conman will keep you laughing, guessing and up all night until the last page is turned and the breathtaking truth is revealed.

"The first blue-chip young novelist .of the 21st Century. Catch him if you can" (Tony Parsons)
"Gagged - caustic and hilarious. Will have you die laughing." (murderone.co.uk)

Wow I did not see that ending coming!

I found myself having to stop several times because I kept seeing the outcome or what I thought was the outcome. I would start back and more unexpecteds would happen leaving me thinking hold on what! Then that little diversion just when you thought maybe.... Then bam!!! It's nothing as you had expected well done you and thank you for such a wild mind ride!

great performance but writing was lacking

Would you try another book from Richard Asplin and/or Matt Bates?

I would absolutely listen to Matt Bates read something else. He was excellent. Writing by Richard Asplin was lacking though. Cool concept, but it jumped around and was difficult to follow. There were times when I was with him and really engaged, but also times when I thought I was missing something.

I had a tough time following the different scene changes.

Great narration and great character voices. I've listened to a lot of audio books and work in radio. This guy is good!

Could you see Conman being made into a movie or a TV series? Who should the stars be?

Yes - I think it's a cool story with potential. A good edit would do a lot for it.

Wanted to like it. Really like the premise and subject. Almost gave up on it, but decided to stick it out. A cool twist at the end, but seemed like it ended abruptly.