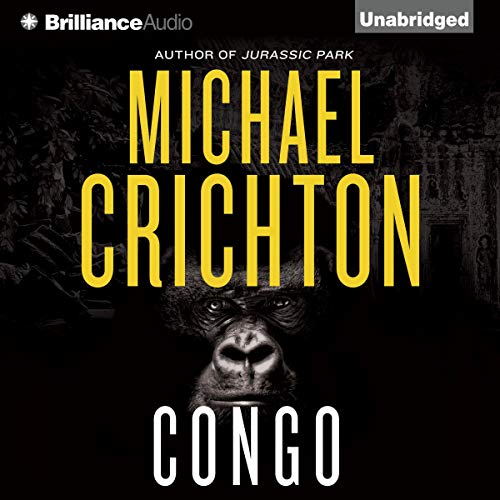 Deep in the African rain forest, near the legendary ruins of the Lost City of Zinj, an expedition of eight American geologists are mysteriously and brutally killed in a matter of minutes.

Ten thousand miles away, Karen Ross, the Congo Project Supervisor, watches a gruesome video transmission of the aftermath: a camp destroyed, tents crushed and torn, equipment scattered in the mud alongside dead bodies - all motionless except for one moving image - a grainy, dark, man-shaped blur.

In San Francisco, primatologist Peter Elliot works with Amy, a gorilla with an extraordinary vocabulary of 620 "signs," the most ever learned by a primate, and she likes to finger paint. But recently her behavior has been erratic and her drawings match, with stunning accuracy, the brittle pages of a Portuguese print dating back to 1642…a drawing of an ancient lost city. A new expedition - along with Amy - is sent into the Congo, where they enter a secret world, and the only way out may be through a horrifying death.....

Congo was adapted to the screen and directed by Frank Marshall.

Fantastic - better the second time around

I originally read this 20 years ago and have recently started re-listening to Michael Crichton books this year. Congo is one of the best books, in my opinion, that Crichton ever wrote. Great character development, realistic mix of science / fantasy, and steady plot development.

I found this particular novel from Crichton to be less interesting that the others of his that I have read. The story itself was good, and it had his scientific details that really help to absorb the reader into a world where the events are actually taking place. But the story seems to be a ton of build up to about 50 pages (or about an hour) of rap-up. The story seems to focus most of its content on the preparation and trip to the Congo, and falls a little flat there. The technology discussed is particularly interesting to me, but I can see it further discouraging other readers. I would recommend it, and I will likely read/listen-to it again, but before you dive in, manage your expectations. This will likely not end up on your top 100.

I really liked the story. The narrator did a decent job, although it took some effort to get through the male voices. Definitely worth it, however.

Really liked the narrator, she was very even and did a good job of making the long explanations that while interesting, are not blended into the story line very well, more enjoyable to listen to.
Fascinating story that was very well researched of course which helps blend the science and fiction seamlessly.

the best of Crichton with excellent narration

Popular opinion on Crichton's Congo has always been divided--some feel it's one of his better novels while many feel it's the opposite. I'm one of the former. I love this book. And while the Jurassic Park movies remain among my favorites, I didn't love the books nearly as much--they were good, interesting, but failed to sweep me away like Congo did and continues to do, and for that reason, I put it well above the Jurassic Park and Lost World novels. Amy, the gorilla, in particular is a gem. I always forget how much I love Crichton's sense of humor. Amy is marvelously rendered and a fabulous character. The other characters are well drawn and interesting--no one is one-dimensional, no one is perfect, everyone is interesting. The narration is superb, and I need to spend a sentence or two on that because when I was trying to decide whether or not to buy the audible version, I very nearly didn't because of the many negative reviews of the narration. One in particular shreds her performance of Peter, saying he sounds like a sulky teenager. I honestly have no idea where they got that. Julia Whelan does a magnificent job with all elements, particularly the sciency bits where Crichton veers off into massive amounts of exposition/history/etc that no fiction author should be allowed to get away with and yet he DOES and somehow does it really well--Julia Whelan does a masterful job with those sections making them every bit as interesting to listen to as the action sequences. As if often the case with cross gender reading, Whelan does sound a little strained with the male characters. But I've heard far worse, and it's not distracting. And she's spot-on perfect with the overall narration, the female voices, and Amy. This was an easy 5 stars and I will definitely be re-listening to it many times in the future.

This book was incredibly fun to listen to, with some great narration to boot.

If you love Crichton, this is about as classic as it gets.

This book spends way too much time on events leading up to the final conflict and technical jargon. I purchased it as a cheap buy to tide me over until next month's credit, but I struggled with wanting to finish it in many places. The narrator did a good job differentiating between different characters and it was entertaining, albeit frustratingly slow in places. I recommend his other novel, Prey, over this one, but it's not a terrible choice.

It was good just not great, I can't quite put my finger on it but it was missing something.

THAT'S A B8 PROBLEM
Written in 1980, Crichton was just getting his feet wet. This is a mass amount of facts and figures. While some of these tidbits of information are interesting, the book as a whole is lacking. No character development, with the exception of Amy the Gorilla. The story was not compelling. You want to skip this one.

This is a typical Crichton novel, a nice mixture of adventure and science. Not one of his better works but still an enjoyable read. Unfortunately it is not a enjoyable listen. I found the narrators attempts at accents to be distracting and would have preferred if she didn't even attempt them.

Interesting but a bit outdated nowadays

Michael Crichton is a good read - normally.
In this special case the setting of the book is placed in the US / Congo / Africa during the late 1970s. Crichton speaks about loads of technical stuff (which is his usual way) that still does not exist in 2017.
So basically it might have been a good science fiction at the time but nowadays you cannot help but laugh at some of his ideas.
Nevertheless: Should you like to know all of Crichton's books, you should read it.