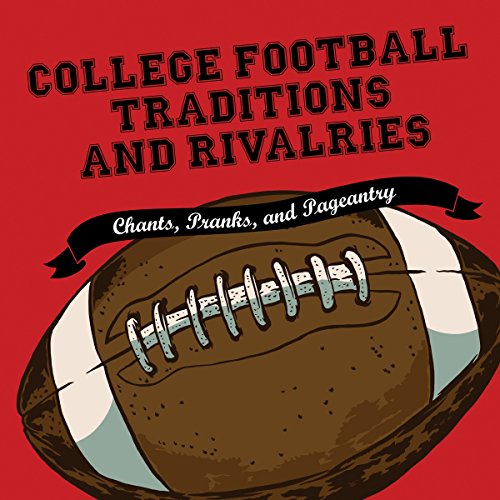 A must-have for football fans of all ages, this handsomely designed gift book is a comprehensive audio guide to the greatest traditions and rivalries in college football.

Every Saturday each fall, millions of Americans watch their favorite college teams take to the gridiron, battling to make it to the coveted national championship bowl game in January. From the Cornhuskers of the University of Nebraska to the Nittany Lions of Penn State, the USC Trojans to Alabama’s Crimson Tide, the University of Michigan Wolverines to the Clemson Tigers, each school has its own traditions, trivia, and rivalries.

This concise audio handbook is a collection of the past and present lore of college football’s major teams for both novices and diehard followers alike. Focusing on the top schools from each division, this handy guide contains original full-color illustrations that showcase the biggest traditions and rivalries in the sport, along with a short description and fun trivia. Learn about the pink visitor’s locker room at Iowa State, the prisoner exchange preceding the annual Army-Navy showdown, and the University of Miami team’s dramatic smoke-filled stadium entrance. The audiobook also includes a special section of quick facts on some other schools that weren’t fully featured.

Fascinating and informative, College Football Traditions and Rivalries is a must for every college football fan.