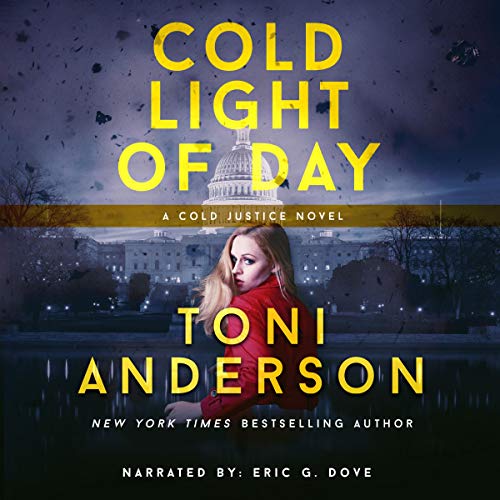 Physicist Scarlett Stone is the daughter of the man considered to be the most notorious Russian agent in FBI history. With her father dying in prison she's determined to prove he's innocent, but time is running out. Using a false identity, she gains access to the Russian ambassador's Christmas party, searching for evidence of a set-up.

Former Navy SEAL, now FBI Special Agent, Matt Lazlo, is instantly attracted to Scarlett but life is too complicated to pursue a politician's daughter. When he discovers she lied to him about her identity, he hunts her down with the ruthless efficiency he usually reserves for serial killers.

Not only does Scarlett's scheme fail, it puts her in the sights of powerful people who reward unwanted curiosity with brutality. The FBI - and Matt - aren't thrilled with her, either. But as agents involved in her father's investigation start dying, and the attempts to stop Scarlett intensify, Matt and his colleagues begin to wonder. Could they have a traitor in their midst? As Scarlett and Matt dig for the truth they begin to fall passionately for one another. But the real spy isn't about to let anyone uncover their secrets, and resolves to remain firmly in the shadows - and for that to happen, Matt and Scarlett have to die.

ok Seriously, Toni Anderson has been bumped up on my must buy list. This series is awesome. IT has just the right balance of relationship heat and work suspense. The story is fast paced so the sex isn't stupid. IT's not something like oh we just got shot at so let's duck into this broom closet and have a quickie before the bad guys find us. Her writing is also realistic. While listening it actually had me thinking, could this really happen? Can this be going on right now?

Matt was hot and kick ass. Scarlet was beautiful and smart. Sure a stupid move on her part is what set this whole thing off but she didn't pull a really really stupid move, although she honestly thought about it.

I am looking forward to the next book in this series. I'm sure I won't be disappointed.

Eric Dove is a great talent and I look forward to any romance book he narrates.

As with most of the books in this series, the suspense part of the novel was the best part. The Romance was a love at first sight, then denial and then forever love. I much prefer that there is some sim balance to reality.

The storyline had lots of twists and turns and I wasn’t able to predict, “who done it?”, before it was revealed in the book.

There was only one sex scene, in the book, and it was all that explicit. Therefore, those listeners that don’t want much intimacy, with their romance, will likely find this series to their liking.

I’ve enjoyed this series, so far, however, if it wasn’t part of the Romance package, I doubt I would have spent the credits needed, to add this series to my library. I prefer my books with a little more heat, if you know what I mean.
-V from Kansas

The plot had interesting twists but Scarlett was too young and immature to be interesting or believable. For a brilliant scientist, she was incredibly naïve and lacking common sense. In what world would Scarlett believe that a foreign embassy wouldn't have security cameras?

Espoinage and the Search for Justice

Cold Light of Day begins with Scarlett trying to clear her father's name for being the most notorious FBI agent who turned traitor to his country. Attending a party at the Russian Embassy with her friend April LeMay and pretending that she is April's sister, Sarah Lemay was the first step, Scarlett could get in to bug the ambassador's office except somebody has beaten her to it. Scarlett could have walked away but she lost one of her earrings which put her on very dangerous people's radar, who don't want the case to be reopen.

FBI Agent Matt Lazlo stepped in as a representative for his boss, FBI ASAC Lincoln Frazer at the Russian Embassy party. He bumped into Scarlett who spilled champagne on him. He felt the instant attraction to Scarlett. He wanted to ask Scarlett for her number except he didn't feel comfortable to be dating anyone while he has family obligation.

When Matt discovered that Scarlett has lied to him of who she really is and what she attempted to do, he arrested her. As more people are being hurt and start dying, the FBI and Matt are starting to wonder if Scarlett's claim that they have imprisoned the wrong man for being a spy.

Cold Light of Day really have non-stop action. The action doesn't stay with the main characters. It gets spread out between the secondary characters in the story. The only thing that the readers/listeners know is that there is still a spy in the FBI Agency working with the Russians.

I love the cat and mouse game in the story. The Russians and the spy are trying to draw out Scarlett by attacking people Scarlett cares about. Matt and Scarlett are trying to stay one step ahead them from being killed and trying to figure who they can trust. There are so many twists and turns especially with the secondary characters who could possible be a spy(ies).

The narrator, Eric Dove did an excellent job. There are so many players in this story, it is amazing that he could give different voices to the characters. I hope he continues to narrate for the Cold Justice series.

I was given this audiobook by the author in exchange for an honest review. I was not compensated or influence in any way for writing this review.

This was a great story. Loved the espionage, spies, kidnappings and mystery solving. Wonderful characters too. I really liked Scarlett, she was had a good sense of humor and didn't really have any TSTL moments. She was smart and witty. I liked the hero Matt too. Great character. He had no deep dark issues or I am not good enough's for her. That is a nice change in a story.

There was a lot of great dialogue through the entire story. Love lots of dialogue. The chemistry between the h/h was very good. It felt real not forced. There is one nicely written sex scene, not erotica.

I think this might have been my favorite of the 3 stories so far.

As for the narration. Fantastic! Eric Dove does such a good job of giving everyone their own distinct voice and does the female characters very well!

I really hope the next book, Cold Fear (Cold Justice Book 4) comes out on audible soon!

There is little wonder why this was 2015 Holt Medallion Finalist. What a very touching read of a daughter believing in her father’s innocents so much so that she is willing to put her life on the line to prove it. Scarlett feels she has little choice with her father in prison dying for a crime she knows he didn’t commit. It is bad enough that she could get caught but finding out someone had been there before her to plant their own listening devices was just heart breaking. Then to find that her best friend was taken, the FBI are following her and take her in. We have boats blowing up, bullets flying, kidnapping, murder, tons of action and passion just a enough heat to keep it interesting. What more could a reader ask for. Toni has been one of my favorite authors from the very first book I read of hers. She never lets me down with her suspense, action packed reads.

Scarlett is wonderful she might have the brains but she sure doesn’t have to know how to pull off the caper of planning a bug. She is nerdy with making a bug that can’t be traced, she has guts, willing to put herself on the line not only for her father but her best friend. I loved her sense of humor, her wiliness to to fight for what she believed in. She has style and class but knows enough to be afraid but doesn’t let that stop her.

I was so glad to see Matt get his own story I just loved him and his whitty ways. He knows how to pull off what needs to be done sticking to target like glue. I thought the hot chocolate was totally awesome and he knows he was going to be in trouble when she woke up. He went for what he wanted but felt guilty doing it. This is a man after my own heart which he got whether he wanted it or not.

The Russians are enough to put the fear of God in the scarcest people, the things that do in this book are just sad. I was glad to see the outcome. It was wonderful to visit with characters from the past books. So many you have fallen in love with it was nice to catch up with them.

For me this was a page turner that had me hooked from the first page. The audio is out of this world the narrator is outstanding. He brings the book to life as he takes you on an action packed ride. He hits the tones just as they need to be with scaring the pants right off me. I found this an easy book to relate to and very believable. It isn’t hard to believe that this has or is happening.

Toni puts a lot of thought into her writing giving wonderful believable stories that you can relate to. They are action packed adventures that keep you holding on to your seat, you do not have to wait long for the other shoe to fall. There is nothing I do not just love about Toni’s writing she doesn’t it in style that I am totally hooked on. I highly recommend this or any of Toni’s books for a wonderful exciting thrill with tons of action, passion and excitement that will just about make you wet your pants in one way or another.

Each book in this series carries quite a punch. Just when you think that you’ve figured out the bad guy, you’re surprised. Great HEA!

I really enjoyed listening to this book! The characters and imagery were so well done. The story pulled me in from the very beginning. Books featuring the FBI have always appealed to me. I thought the author did great with the various characters and how some were not all as they seemed. I do not like to give away spoilers in my reviews, and with that said, I won't write a synopsis of the book. I will definitely continue to listen to more books by this author and narrator.

Enjoyed the mystery & adventurous plot. Appreciated the overlap of characters from the previous two books. Glad that same narrator was used.

I absolutely loved this audible. It has the perfect mix of suspense, and the betrayal that seems to go throughout the book draws you in further.

Scarlett is an awesome heroine, who, after screwing up majorly, finds herself on the run. Matt Lazio was a hero that I wanted to love and hate at the same time (although sometimes I felt he was justified in being an @$$ towards Scarlett) The chemistry between the two was intense, and even when faced with danger, the sparks fly.

The audio drew me in from the beginning, and while some of it seemed slow, it was the perfect listening while walking laps or cleaning the house.

Eric Dove did a fantastic job narrating, and I can't wait to hear more of his awesome audios.

A five star audio, that will keep your heart pounding, and questioning who really deceived who throughout. I definitely recommend one clicking this