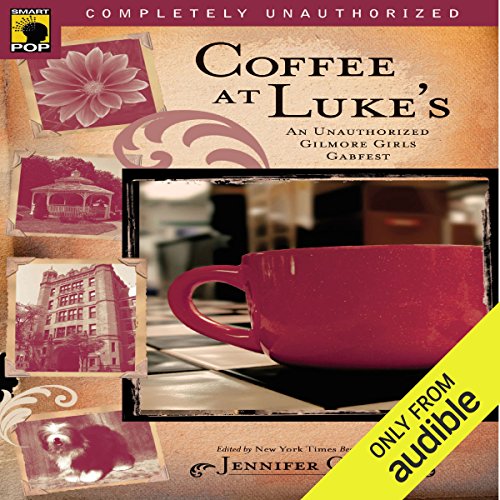 In the fall of 2000, Gilmore Girls premiered on the WB, and viewers were introduced to the quirky world of Stars Hollow and the Gilmores who had made it their home, mother-daughter best friends Lorelai and Rory. Coffee at Luke's is the perfect look at what made the show such a clever, beloved part of the television landscape for so long.

What are the risks of having your mother be your best friend? How is Gilmore Girls antifamily, at least in the traditional sense? What's a male viewer to do when he finds both mother and daughter attractive? And how is creator Amy Sherman-Palladino like Emily Gilmore?

From the show's class consciousness to the way the characters are shaped by the books they read, the music they listen to, and the movies they watch, Coffee at Luke's looks at the sometimes hilarious, sometimes heartbreaking underpinnings of smart viewers' Tuesday night television staple and takes them further into Stars Hollow than they've ever been before.

"A must-read for any Gilmore Girls fan." ( The Sacramento Bee)

A must listen for every Gilmore Girls fan

Would you consider the audio edition of Coffee at Luke's to be better than the print version?

Colby Elliott sounds as if he is a true fan, not just the guy reading the book.

Great analysis of the series!

I am very particular about narrators. This narrator spoke at a good pace and was easy to understand. I loved the concept of the book. Each essay had a unique analysis of a distinct aspect of the show. it was an enjoyable listen.

Loved the interesting narrative and finished it in 5 days. I will recommend to read on Gilmore Girls fans.

As a 46-year-old man that loves good writing, I absolutely loved "Gilmore Girls" when we discovered it on Netflix. The writing was superb, to the point I think it may beat Aaron Sorkin's "The West Wing" for best show ever. (To be fair, Sorkin left TWW mid-show and it had some really bad episodes/seasons after his departure).

So when I saw that a book had been written discussing all things "Gilmore Girls", I was excited to hear it. While the stories and research are great, I have a question for the powers that be at Audible: A book by women, about a show about women, and you get some computerized sounding man to narrate it?

My wife and I listened to this and could not believe that a show about women that had such a voice was given such a bad, male narrator.

If the narrator had been good, that may have helped. But for this topic, I really think a female voice should have delivered the female voice of the writers and the show.

For that reason, I am giving the book 5 stars, except for narration. I recommend the book, but also recommend that Audible start to actually look at what material they are assigning to narrators.

I loved hearing all the different opinions about my beloved Gilmore Girls and the series. Even after A Year in the Life was released. I wasn't a big fan of the performance because it was a male voice, but it did entertain me a little. And I found it ironic as well, just as many of the points were made throughout the book about Gilmore Girls. I would listen to it again.

The people that love this show are not going to love this BORING narrator that they have reading this book to you. The book of essays might have been ok but this slow talking, monotone narrator kills it. I love GG and I think maybe they should have gotten a WOMAN to narrate this clearly girly show and these essays that were All Written by women, maybe I could have made it past chapter 5 if they had. 🤷🏼‍♀️

Go grab a girlfriend for a binge watching weekend of this show and you can discuss more pertinent and interesting points than these authors. Also, I'm sure the narration of a female or even a male who watched the show would be better than this joke of a narrator. I did try the sample and thought I would still give it a try, but don't. Just Netflix the show, and if you got at least a B in 12th grade English (advanced or not), you can put together better talking points, references, symbolism, etc. to these characters and their story lines. All this is is a regurgitation of episodes, with some talking points repetitive and with no real mind-blowing perspective. I know I shouldn't have been expecting something complicated, but the money for one month's subscription to Netflix would have been money better spent.