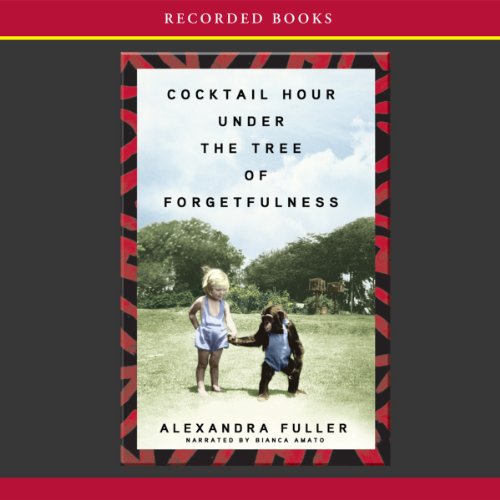 Cocktail Hour Under the Tree of Forgetfulness

Alexandra Fuller won worldwide attention, popular acclaim, and critical accolades for her memoir of her childhood in Africa, Don’t Let’s Go to the Dogs Tonight. This engaging follow-up explores Fuller’s parents’ childhoods and charts the trajectories of their lives through all the British couple’s experiences in war-torn Africa.

Fuller braids a multilayered narrative around the perfectly lit, Happy Valley-era Africa of her mother's childhood; the boiled cabbage grimness of her father's English childhood; and the darker, civil war- torn Africa of her own childhood. At its heart, this is the story of Fuller's mother, Nicola. Born on the Scottish Isle of Skye and raised in Kenya, Nicola holds dear the kinds of values most likely to get you hurt or killed in Africa: loyalty to blood, passion for land, and a holy belief in the restorative power of all animals. Fuller interviewed her mother at length and has captured her inimitable voice with remarkable precision. Cocktail Hour Under the Tree of Forgetfulness is as funny, terrifying, exotic, and unselfconscious as Nicola herself.

Great by both ear and eye

Fuller's white British-born parents loved their life in colonial Africa until the war for independence forced them to leave Rhodesia/Zimbabwe, but not Africa. Their story reads like a pioneer saga, full of reckless courage and passionate relationships set against a backdrop of natural beauty and political turmoil. In this second story of her childhood, Fuller, who now lives in America, paints a vivid picture of her inimitable mother, who was as devoted to her Scottish heritage as to the African land she farmed with her husband. If only Katherine Hepburn were alive to play her on screen! We see the mother's British-colonial sensibilities and experiences viewed through her daughter's more critical but loving eyes. I kept wanting to take a break to learn more about the Rhodesian civil war, but I couldn't leave the book. Both Amato, the reader (her some-kind-of-British accent charmed my American ears), and Fuller bring the story and characters alive, balancing tragedy with humor. After listening to this, I began reading Fuller's earlier memoir, "Don't Let's Go to the Dogs Tonight" on my Kindle, and then picked up "Scribbling the Cat," about a white African soldier, in old-fashioned book form. Reading in print helped me appreciate Fuller's lyrical style and colorful slang ("Cat" has a glossary in the back), but I plan to listen to them all. In any format they're all terrific--you learn, you laugh, you are moved. What more can a reader ask?

What other book might you compare Cocktail Hour Under the Tree of Forgetfulness to and why?

Her skill with reading dialogue, her light touch with humor, and her ability to shift tone subtly, without melodrama, during heavier parts.

I was a little leery at first, approaching this novel, having been bowled over by Fuller's initial star effort "Dogs" but also being slightly disappointed by Fuller's follow-on work. This book is a perfect compliment to "Dogs", full of insight, compassion, grit and finally, courageous in depicting one's irrepressible mother with such fierce honesty yet admiring love and by being, thank goodness, free of victimhood. I was hoping that Lisette Lescat would once again be the narrator, but Bianca Amato more than measures up to the task. Bravos all around!!

But so much more. I expected a quirky story of a white European family living in Africa. That's what this is, alright, intertwined with the story of the traumatic growing pains which accompanied the declarations of independence by several African countries in the 1960's, tragic accidents, lack of good medical care, grief, and depression. But overall, the story of courage to keep going, to keep living, to keep working, loving, moving forward. And ... to have another glass of wine. Beautifully read (and sung)!

Unique story, a life you could not imagine!

Great, fun read, and informative read. This book provides insight into a bit of colonialism, Africa, and relations among peoples and families. More importantly it provides a great insight into what life was like during Colonial times in Rhodesia or Kenya. Fuller writes about her family, their dreams, their lives, and their faults with frankness and love. I bought this book during one of their sales and I was not disappointed. Though I did not read her first book "Don't Let's Go to the Dogs Tonight" I was able to thoroughly enjoy this book. If you thought your childhood was tough, or your family was eccentric read this book and you will realize that maybe your life was relatively normal. The performance is not 5 stars because the narrator's voice, or accent takes a little getting used to.

After having listened to "Don't Lets Go To The Dogs Tonight", I was delighted to see the story continue with "Under The Tree of Forgetfullness". This second book was excellent; as it was able to take you deeper into the incidents and personalities of the Fuller Family! The true life story about the authors life while growing up in Africa was engaging, witty, and very informational. The narration by Bianca Amato was top notch! Bianca is a brilliant narrator whose voice and song captivate you while drawing you into the story. Under The Tree of Forgetfullness was a 5 Star experience for me all the way around!

Would you consider the audio edition of Cocktail Hour Under the Tree of Forgetfulness to be better than the print version?

DO NOT KNOW I JUST ENJOY THE AUDIO

I NEVER WOULD HAVE CHOSEN THIS BOOK TO READ. I DID ENJOY IT. LOVED THE NARRATOR

Where does Cocktail Hour Under the Tree of Forgetfulness rank among all the audiobooks you’ve listened to so far?

One of my favorites.

Having traveled a little in Zimbabwe I was fascinated with the country and especially how it transitioned from British-led Rhodesia.

Nicola (the author's mother) winning her first horse show on a borrowed horse that no-one else could manage,

Yes, there are three particularly devastating events, but listing them would be a spoiler.

The book is written from the POV of the grown daughter who returns to Africa to interview her parents and track down her mother's colorful past. It is beautifully read by Bianca Amato. I kept thinking the author herself was telling the story.

Would you consider the audio edition of Cocktail Hour Under the Tree of Forgetfulness to be better than the print version?

Which character – as performed by Bianca Amato – was your favorite?

The Rhodesian confrontation with liberation fighters.

A distinctive voice of a charming, although flawed, woman and the adventures she has lived through in various central African countries over the last 60 years or so.

Where does Cocktail Hour Under the Tree of Forgetfulness rank among all the audiobooks you’ve listened to so far?

One of the best. I tell people it is a bit eccentric at times and was a great listen. The narrator reminds me the actress, Kristin Scott Thomas. The narration opened up the story in a very grand way.

What other book might you compare Cocktail Hour Under the Tree of Forgetfulness to and why?

Gone with the wind

Which character – as performed by Bianca Amato – was your favorite?

No, it was more fun enjoying it slowly.

Don't be scared off by the African war element. It was really lovely overall and I recommend it.

What made the experience of listening to Cocktail Hour Under the Tree of Forgetfulness the most enjoyable?

Nothing ordinary in this woman's life, funny and poignant.

Nicola Fuller of Central Africa was both ridiculous with her snobbery and admirable for her strong core.

What does Bianca Amato bring to the story that you wouldn’t experience if you just read the book?

I like Amato's plain reading. Too many readers feel compelled to over dramatize, rather than give a plain, strong delivery. Her accent added location, but didn't interfere with understanding the story.

This book is well and tightly written.