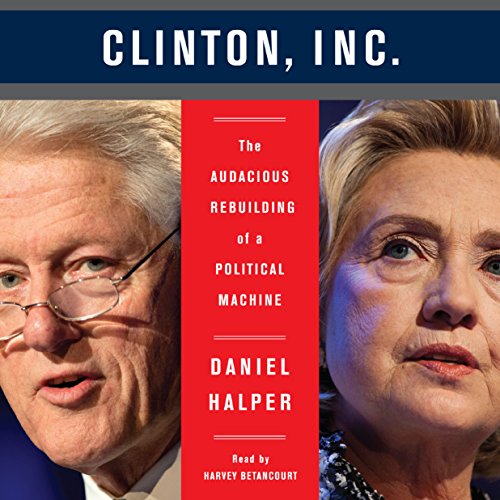 In the 12 years since the Clintons left the White House, they have gone from being virtually penniless to multi-millionaires, and are arguably the most popular politicians in America - respected and feared by Republicans and Democrats alike. But behind that rise is a never-before-told story of strategic cleverness, reckless gambles, and an unquenchable thirst for political power.

Investigative reporter Daniel Halper uses a wealth of research, exclusive documents, and detailed interviews with close friends, allies, and enemies of the Clintons to reveal the strategy they used and the deals they made to turn their political fortunes around. Clinton, Inc. exposes the relationship between President Obama, the Bush family, and the Clintons - and what it means for the future; how Bill and Hillary are laying the groundwork for the upcoming presidential campaign; how Vice President Biden and other Democrats are trying to maneuver around her; Chelsea's political future; the Clintons' skillful media management; the Clintons' marriage and why it has survived; and an inside look at the Clinton's financial backers and hidden corporate enterprises.

Clinton, Inc. is the key to understanding America's most powerful political couple.

Would you try another book from Daniel Halper and/or Harvey Betancourt?

Clintonmania, entertainment, save your money, the authors are trying to make a buck with no content. This is a Kitty Kelly book not academic.

Would you ever listen to anything by Daniel Halper again?

He was bored himself.

There are opportunists in the book publishing world probably sponsored by the Clintons.

We are living in sad times.

Hearsay is not Evidence

What would have made Clinton, Inc. better?

An Editor and Publisher with integrity.Perhaps if Mr Halper tried to base his book on real evidence and not on hearsay, his book might show some insight. But then one will still have to deal with him being a psychic, who knows what the Clinton's think and feel. Mr Halper is more suited to writing a Soapy than an Biograhy.

A biography written by Mr Robert A. Caro> I would also like to suggest to Mr Halper that he also reads a book by Mr Caro, to enable him to see the standards required to write a biography.

In American courts hearsay is not allowed, why does the American public allow it in their public forums?