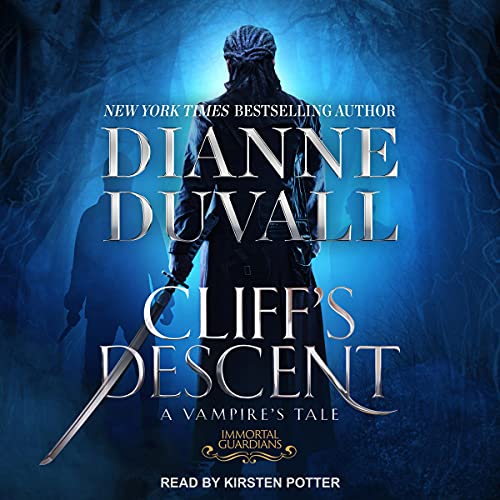 Every mortal who works at network headquarters knows that vampires reside below them. They were the first to surrender to the powerful Immortal Guardians who hunt them. And they did so, hoping they can be saved, that the doctors and scientists the Immortal Guardians employ can halt the progressive brain damage that robs all vampires of their sanity. Though curious, Emma never thought she would meet any of the vampires who remain under heavy guard several stories beneath her office. Then mercenaries strike, bombarding the building with heavy artillery. The vampires are freed to join the fray...and Cliff saves her life.

From that moment on, she can't stop thinking about him. When Emma discovers a way to speak to Cliff at network headquarters, she becomes even more fascinated by him. He's smart, charming, and honorable to his core despite the darkness that lies ahead. And he seems to crave her company as much as she does his. Aware of the eyes that watch them, they keep their encounters innocent, limiting them to those of mere acquaintances. Nevertheless, their attraction grows, and she soon falls in love with him even as the madness begins to claim him. Will the two of them find a way to defy the odds and find their happily-ever-after? Or will Cliff's descent consume him?

I was super disappointed with the ending. With the changes to Leah's character in Seth's book, I was hoping for Cliff to join the immortal guardians ranks, but not the case. He's normal! Why!? Cliff's a hero and Emma's a gifted one. That could have had a happily ever after for all of eternity type of ending, but no. News of "vampire Cliff,'s efforts" had reached the globe with the immortal guardians having his back. Why just normal!?

I was expecting more, spoiler review

I've been waiting for Cliff's story for so long that I was elated when I saw it was next. But with that been said I was very disappointed with this book. More than half of the book is snippets of previous books. Ms Duvall this is the first book of yours I'm not happy with, like the inconsistency of saying Seth read Cliff's mind to find out why he went berserk on Dr Wexman when in Shadows Strike Zack did. It wasn't all bad though as I did enjoy watching Cliff and Emma fall in love. Emma is the perfect woman for him, she knew just what to do in every situation. I also adore Todd, Cynthia and Sadie and all they did to help Emma and Cliff. Cliff deserved a happy ending and I'm glad you found a way to give him one, but it was kind of a letdown as I was hoping for more. Kirsten Potter as usual you were phenomenal, listening to you narrate the madness going on in Cliff's head was beyond creepy, but oh so good. I look forward to the next book in this series hoping it will answer certain questions, like what will Cliff do next?

Of all the stories written in this series, I expected Cliff's story to be different from the usual 'black guy/girl' trope, except instead of killing him/her off, you switched it to returning him to 'normal'. Really?!

Wow. Okay, I have a lot of mixed feelings about this story. About 89% of the book is recap but through Cliffs POV. Even though I knew there would be a lot of recap, I still had a lot of high expectations for cliffs story. And I feel a little let down. It might have been better if I haven’t read all the books over and over and over and needed the reminders of things that happened. But either way I wasn’t expecting it to take up pretty much all of the story. That being said I enjoyed learning the new things like his relationship with Emma, and what happened to cliff before he walked out of the forest. But even though I’m sure many will be happy with the ending, I wish it had went another way. It’s not a bad story, I couldn’t put it down until I finished it, but I feel a little sad because of how much things will change with the ending. But I’m sure not many will agree with me. I just had certain ideas that
I hoped would take place lol. So it’s not fair for me to say so. Oh well. I still would recommend people read this story, just be prepared for a lot of refreshing.

I WAS EXPECTING BETTER

I was hoping for a more creative story for Cliff. The story just Dragged along. The ending made me wonder if this was a Cliffhanger. Just.....disappointing.

I'm not sure I'm in love with the book

I'm having trouble with this story, I was expecting him to turn into a gifted one something like that since she is a gifted one. im in mourning.

Clif gets his ending. I didn't want to listen at first because I knew how it would end but now I'm glad I did. Great addition to the IG series. Great narration as usual. Loved it.

Expections are deceiving some times!

Not to happy about all the rehashing of the previous books in the series. After re-reading at least 3 times some 5 times I was disapointed. I know that for someone who doesn't have a clue about this series it does hold it's own and explains a lot.
Did like their love story and how new friends did help along the way like Ammy, Tod and of course Sadie.
The ending was just ok for me, did have a feeling that "Dad" had a say in it. Would have like to know what happens to him beeing mortal, will he keep working for them and in what capacity, what about his dad?? Did want him to be immortal, she is after all a gifted one.
Don't think I will be re-reading this one as much.
Very happy that Kirsten Potter(need more stars for her) was still the narrator, felt like an old friend. Her characters are always on spot, you know who is who without a doubt.

RE READ 5/27/22 After re reading I have changed my mind about my rating. The Audible edition by Kirsten Potter is still amazing and why Cliff's Descent gets 3 stars. After reading it again on my kindle when I finished, I felt so disappointed and sad. I don't think Cliff got the great brilliant life he and Emma deserved. He should have at least been turned into an Immortal Guardian. Emma is a Gifted One who can be turned into an Immortal Guardian. Seth's father turned Leah Seths human wife into a Gifted one and now she is a Immortal Guardian and she did NOTHING TO deserve her status!! Leah did NOTHING!!So Why Not Cliff after all he has done for Seth and his Immortal Guardians? Yeah they did a lot for Cliff but he did just as much for them in turn. I also hate that Cilff has been written out of the series. Its nothing he can really do now that he is human again. So Yeah after further thought I am extremely disappointed in Cliff's Descent!!

BELOW IS ORIGINAL REVIEW!

AMAZING AUDIBLE!!!! EXCELLANT NARRATION BY KIRSTEN POTTER'S!! SHE IS AN OUTSTANDING NARRATOR FOR THE IMMORTAL GUARDIANS!!

OMG I Loved Cliff and Emma they were the perfect couple. We travel through Cliff's long struggle as a Vampire and the Many Ways he kept his Honor and Helped the Immortal Guardians. We meet Cliff in bk2 "Night Reigns" and he is a ever present character in every book in the series. I love this characters so much my heart is breaking. Will we see Cliff again?

Emma was a strong loving mate for Cliff she refused to give up on him no matter what. Emma stood by her mans side and she had Cliff's back with every Mental Descent or Break over there many years together. I loved the way we see the big events in the Immortal Guardians storyline from Cliffs Perspective!!

I am giving Cliff's Descent 5 stars because of the Narration by Kirsten Potter/ She is OUTSTANDING and Because I LOVE CLIFF AND EMMA!! I have mixed feelings on how the story ended for Cliff. Don't get me wrong the ending makes sense. Its Just that I wanted something spectacular for Cliff and I got what made sense and Not Spectacular!!

This was a well rounded story, going back to the beginning to the end. This story relieved all the highlighted port of took of cliff's unique journey to the ending result. I can't tell you how much I rooted for Cliff. especially since e book one through now. I do hope that Dianne Duvall goes on to explain both Cliff and Emma story family and love for one another follows in her writing. The narrator did a great job at her reading the story.

This one really made me feel the pain and joy of the characters. Great story well read!